In Lieu of 1000 Words: The KC Sound Collective at The Blue Room

I’ve said it before: My rediscovery of Kansas City’s jazz scene, bursting with amazing young talent, inspired the start of this blog nearly three years back.  So, when five of those exceptional musicians form a new group and release their first CD, you’ll find me at the release show.

With Hermon Mehari on trumpet, Steve Lambert on tenor sax and flute, Andrew Ouellette on piano, Dominique Sanders on bass and Brad Williams on drums, The KC Sound Collective brings together five of the best young jazz musicians in Kansas City.  Their contemporary compositions and takes on more modern jazz standards draw an audience in during live performances.

Now The KC Sound Collective has released their first CD, In the Moment. The second CD release show was on the stage of The Blue Room last Thursday, May 24th. As the weather outside stormed, those of us in the club heard jazz from some of the musicians whose excellence is key to this music’s future.

The photos below show you how the evening looked. As always, clicking on one should open a larger version of it. 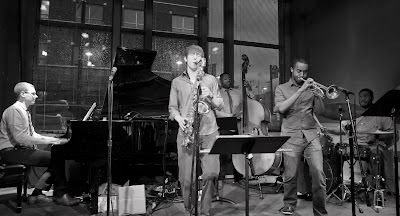 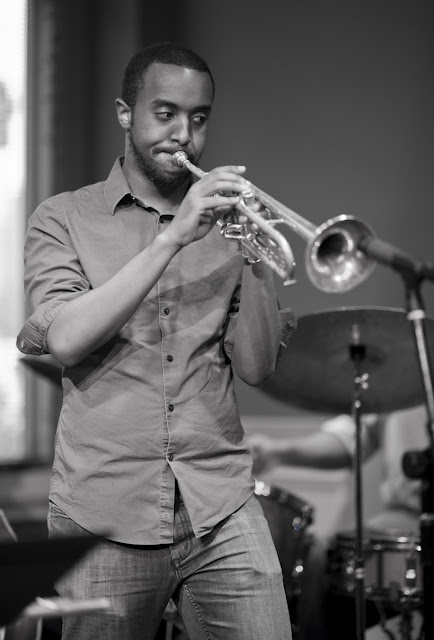 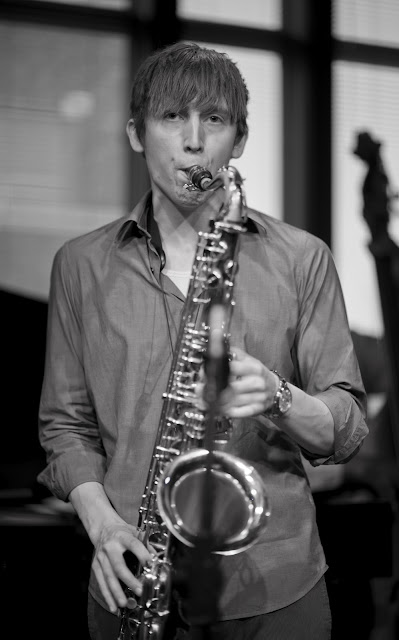 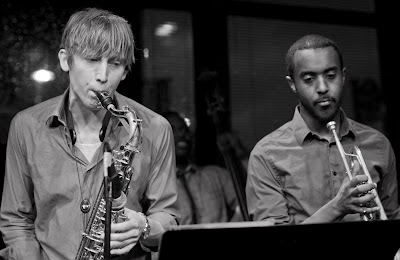 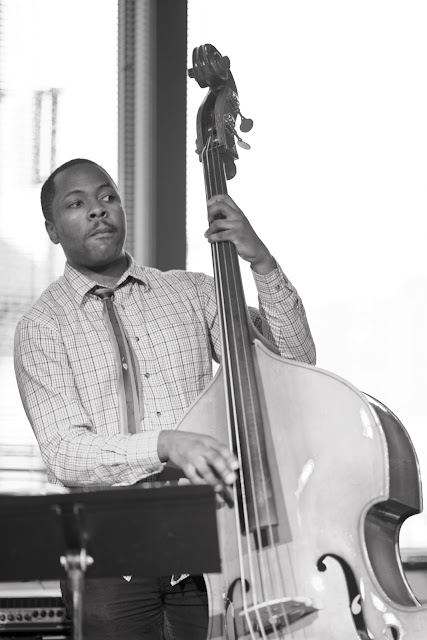 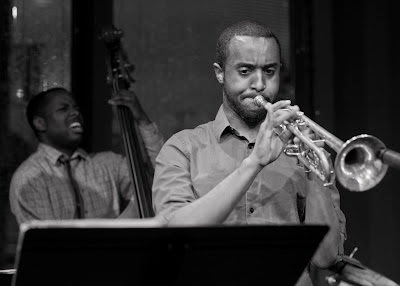 Hermon on trumpet and, behind him, Dominique on bass 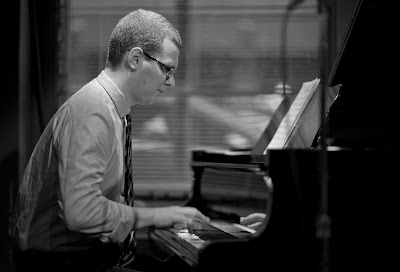 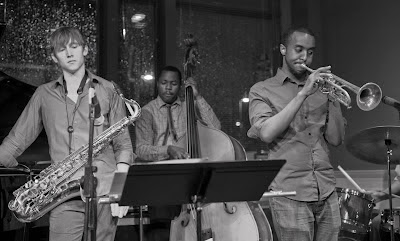 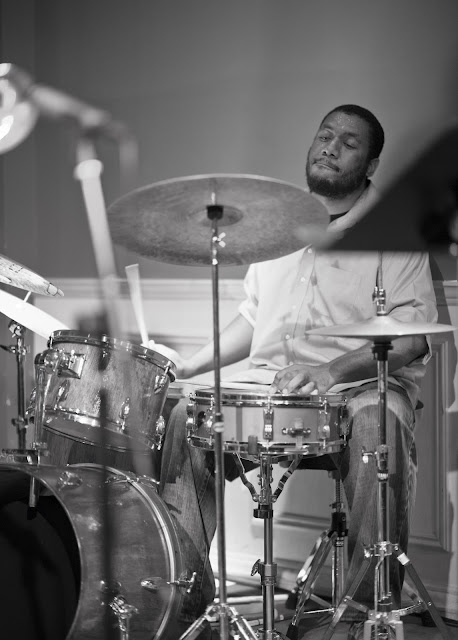 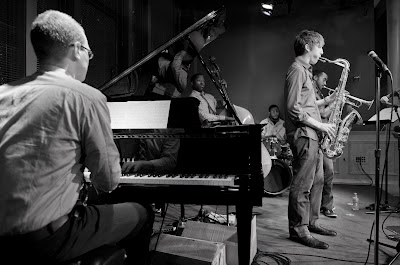 The KC Sound Collective at The Blue Room

Chris Hazelton got me in trouble.

I was listening to his latest CD, Peregrination, at work, through headphones. I stopped, hearing the first cut, Harlem Groove. Then, I didn’t realize, I started swaying to the beat, moving one shoulder up, then down, then the next, listening to that swinging Hammond B-3 organ play. Then Danny’s solo flowed in and just intensified my concentration. All the while, Kevin’s beat kept the music moving perfectly.

Then someone tapped my shoulder and asked, “Are you okay?”

Sure I was okay, I thought. I was enjoying Chris Hazelton’s jazz organ, stepping right into the traditions set by Jimmy McGriff and Jimmy Smith, supplemented by Danny Embrey’s always intriguing and wonderful solos, and Kevin Frazee’s drums driving the tempo right. I was better than okay. I was enjoying this.

“You'll have that spreadsheet in a half hour,” I said.

Ever since Jimmy McGriff performed as the headliner who wasn’t rained out the year I presided over the Kansas City Jazz Festival, I’ve been a fan of the Hammond B-3. With Peregrination, whether on an updating of a Rogers and Hart classic, or on a ruminative ballad, or on an original by himself or Danny, Chris shows a masterful touch. And the interaction between himself and Danny regularly results in compelling lines tossed back and forth, organ to guitar to organ.

Peregrination can be purchased from Amazon here or downloaded from iTunes here. Or, better yet, catch this trio live this Friday at Take Five Coffee + Bar (151st and Nall) for their second CD release party, and pick up a copy there.

Their first CD release party was held last Thursday at The Blue Room, where about a hundred of us heard just how good this group sounds in person. Below is a glimpse at how it looked. 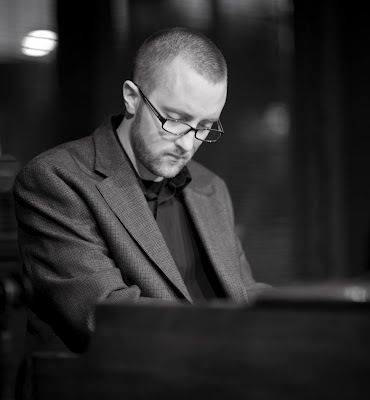 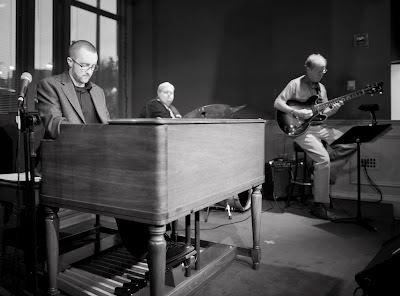 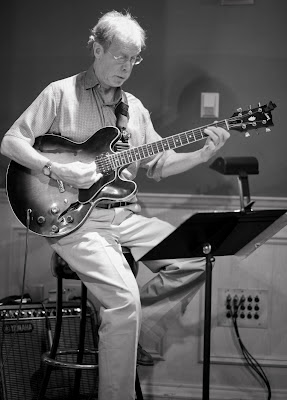 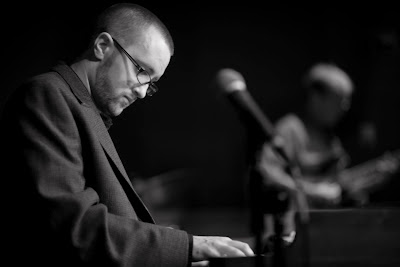 Chris and, in the background, Danny 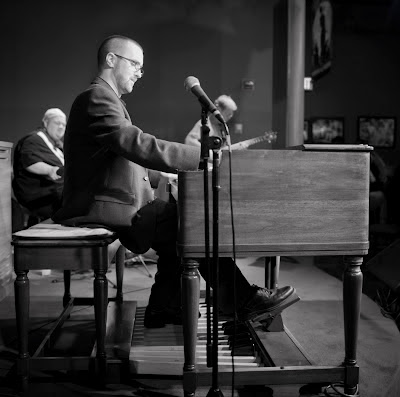 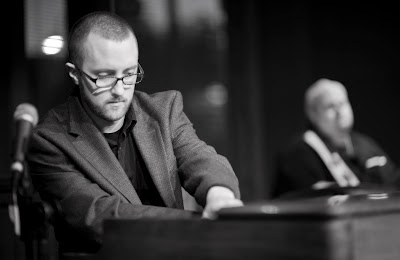 Chris and, in the background, Kevin

In Lieu of 1000 Words: Rich Wheeler Quartet at Take Five

This is one of Kansas City jazz’s best kept secrets.

Not among musicians. Musicians in town know all about Rich Wheeler. He’s in Alaturka, in the People’s Liberation Big Band, in Mark Southerland’s groups, in Brandon Draper’s groups. Musicians know Rich is one KC’s best on tenor sax.

But because he’s mostly played as a sideman, the public is less aware of his name. Many in an audience just ask, so who was that fantastic tenor player in the group tonight?

That’s why when Rich Wheeler fronts his own group – especially when it’s in Take Five Coffee + Bar, one of this area’s most delightful jazz spaces – I’ll be there. And when backing Rich up in that group is T.J. Martley on piano, Bill McKemy on bass, and Brain Steever on drums, I know I’m hearing a quartet culled from Kansas City’s top jazz musicians.

Last Saturday night, May 12th, at Take Five, they did not disappoint. Rich fronts this group with natural ease and remarkable talent. His full tenor sound filled the room with solos as exciting as they are imaginative. T.J., Bill and Brian played perfect support or spread-your-wings solos which consistently ended to wild applause. It’s been especially wonderful to hear Brian develop over the last couple of years into a drummer who leaves audience members whispering to each other about what they just heard (Saturday, I saw that more than once).

Let’s also recognize Take Five, which is bringing jazz to the suburbs several nights each week, in one of the most comfortable, most welcoming, and most acoustically solid spaces to hear the music, city or fringe.

If you missed it, here’s how the night looked. As always, clicking on a photo should open a larger version. 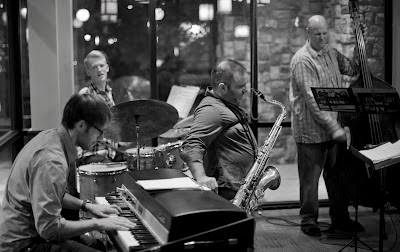 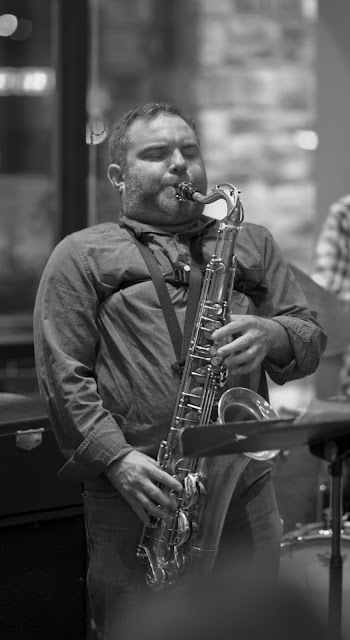 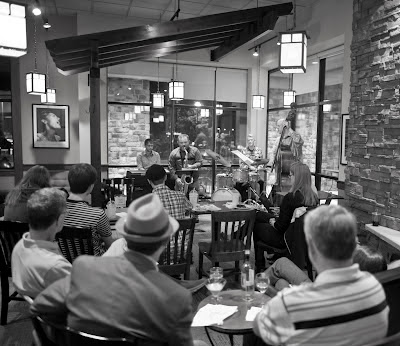 Enjoying the quartet in Take Five 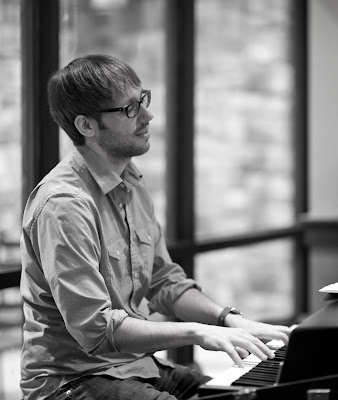 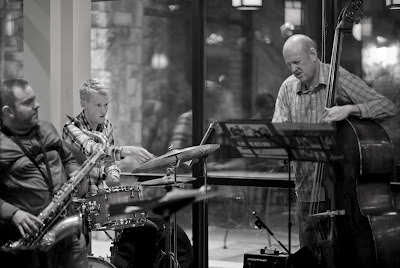 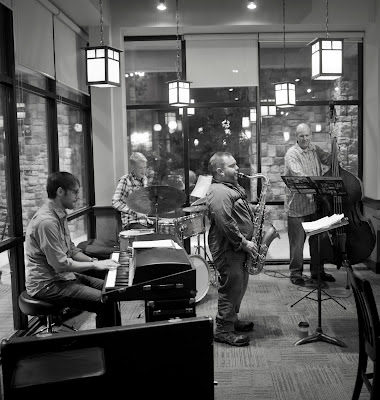 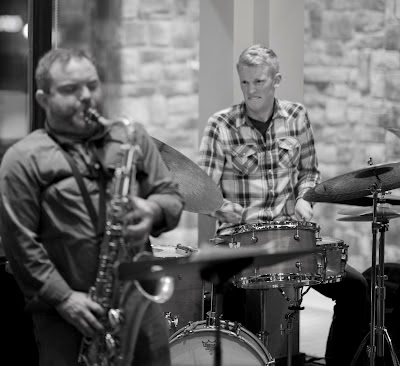 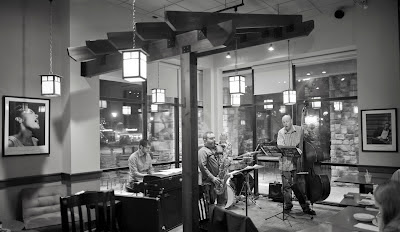 Framed by Billie on one side and Louis on the other, the Rich Wheeler Quartet in Take Five Coffee + Bar

Here’s an example of spectacular.

On screen, light shines on the sleeping, off-duty sailor. He awakens. In the theater, a big band plays, its score at this point cautious, curious.  Other sailors awaken. There’s alarm. The big band score evokes apprehension but still curiosity, too. Sailors scurry, climb the riggings. The live music escalates. In the distance, a fleet of ships approaches. They’re the enemy. Will they attack?  Music and movie mesh, the music building the stress and the sense of unknown, and underlying increasingly frenetic action. My hands are clenched, tight.

On screen, gun turrets are manned and raised. This single battleship prepares for an enemy fleet. They are the enemy, aren’t they? Why don’t they attack? The big band feeds the tension while foreshadowing nothing about how this will end.

I’m not going to tell you how it ends, either.

But I’ll tell you this: We’re hearing big band outside the box. This isn’t a lush auditorium with a guest artist. This isn’t late night in a club. This is Kansas City’s most original, inventive big band performing their score to the renowned 1925 silent film, Battleship Potemkin. The film plays to a few hundred people in the darkened theater, and the People’s Liberation Big Band of Greater Kansas City is an inseparable part of the experience.

Last year I photographed the big band’s May 1st performance at the Record Bar (here) where they played excerpts from their Battleship Potemkin score to excerpts from the film. It was typically quirky and fun, but the highlight of the evening came later when vocalists joined the band to parody the works of Kurt Weill. That’s the kind of musical sarcasm which People’s Liberation Big Band (PLBB) pulls off so skillfully, and which plays through so many of their shows with intellectual yet visceral delight.

But the real delight of their score to Battleship Potemkin wasn’t revealed until last Tuesday, May 1st, in the lower level theater of the Plaza Library, where the film was shown on the big screen. The music, both the original score and its performance, complemented the film near-perfectly, as if this 1925 silent epic was always meant to be seen with this and only this accompaniment.

Our friend Plastic Sax has written about the plethora of big bands Kansas City today is blessed to enjoy (here). And the others, such as the Kansas City Jazz Orchestra, are terrific, full of jazz masters over whom this city can unashamedly gloat. But few big band fans who relish a plush chair to enjoy the latest arrangement of a Basie or Ellington classic will also appreciate the risks taken by PLBB.

This is not your grandfather’s big band. It’s compositions pushing the edge through talent and wit. It’s unconventional voicing in unconventional settings. It’s accompanying, of all things, a Russian silent film lamenting workers’ rights on International Workers Day. Name another big band which has done that.

But when they work, the results can be spectacular.

So you missed last Tuesday’s Battleship Potemkin performance. But you can still enjoy the People’s Liberation Big Band of Greater Kansas City on a new CD.

They perform the first number, 12 Miniature Blues, 16 minutes of it, on Music for Owen/Cox Dance Group, Vol. 1. This may have been composed by PLBB leader Brad Cox for dance, but it stands on its own as a showcase for the big band at its best. From off-kilter cartoonish blues to Bob Fosse-style sleaze, to a sound cacophony, all wrapped in Brad’s unconventional whimsy, this is big band as you don’t hear big band anywhere else. It pushes boundaries and it’s fun.

You can purchase Music for Owen/Cox Dance Group, Vol. 1, here.

From an email from Stan Kessler:

We are having a joyous celebration of the life of Bill Caldwell, May 20th, 2 p.m. at The Blue Room. This is for those of us who knew and loved Bill, but could not make it to the funeral. Please help us spread the word to the appropriate people.

Remarks and stories by friends and family.

The idea is for this to be fun and light, as Bill would have wanted it. This will last about 2 hours. There will be his CDs for sale, and part of the proceeds will go to his wife, Kim, to help defray funeral costs.

Hope to see you there.