For the past month this blog has reprinted articles from the thirtieth anniversary issue of Jam magazine. I’ve done that because long after the printed copies – available free all over town – are filed in closets and trash cans, these stories will show up in Google searches, something less likely to happen to the PDF available for download (here).

The issue asks, what is the future of jazz in Kansas City. This week, the is last excerpt, with the views of Cheptoo Kositany-Buckner, the new executive director of the American Jazz Museum. 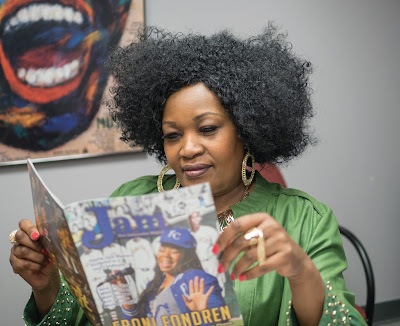 Next year, Kansas City is getting a major new free admission jazz festival.

“We are launching the Kansas City Jazz Festival. It will start on Memorial Day weekend, 2017. It will be a collaborative effort with various organizations to launch something huge. We will bring artists from out of town but we also want to elevate Kansas City jazz and Kansas City music and made in Kansas City. The festival is about celebrating our own brand. I want it to be a legacy for generations to come. I want it to be something that families prepare to go to every year.

“There are a lot of jazz festivals that happen all over the world in major cities. People who love jazz go to these festivals, a lot of them. I want our festival to be one where people say, I must be in Kansas City for the Kansas City Jazz Festival.”

Those are mighty lofty goals for someone who has been on the job just a few months.

But nobody who has met Cheptoo Kositany-Buckner doubts that she will pull it off, including the mayor (as you can read in his interview in this issue). She inspires that confidence.

The Mutual Musicians Foundation is the most historic and revered building in Kansas City jazz. But the American Jazz Museum is the elephant in the jazz room. It’s where the most programs, education initiatives, a major club, a major festival – and, oh yeah, a museum – begin.

For starters, out of the $27.6 million bond issue proposed for the 18th and Vine district, over $2 million is targeted for the museum.

Some of those funds will go towards reimagining the Blue Room including, Kositany-Buckner says, “the furniture, the look and feel, the ambiance and the food issue. That has really been a challenge for us, not having food in the Blue Room. Audiences sometimes leave to go seek food somewhere else.

“Our sound equipment is old. I tell people that we are an organization that deals with sound. We need to have state of the art technology to stream music, to allow people to connect to the live music going on in the Blue Room. The entire experience, I think, will change.”

Other plans, Kositany-Buickner says, “will allow us to create a new feel when walking into the jazz museum. Having the ability to experience jazz when you come in there, whether it’s through exhibits or music or performance or different kinds of activities.”

She turned towards the museum atrium. “We plan to increase our public programming. We are bringing in artists who have written books about jazz musicians. The Gem at 500 seats is sometimes too much for some of the activities we want to do. We use the space now for jazz storytelling. Every First Friday we have over 250 kids in the atrium.

“There are people in the community who come into that space to meet. It’s a community room.”

Plans are already proceeding for exhibits.

“There will be a number of changing exhibits,” Kositany-Buckner said. “There are going to be major exhibits that will be in place for three months. That will mostly include art with the theme of jazz or African American culture. One of the visions that I have is for the jazz museum at 18th and Vine to be the place where quality art is presented east of Troost.

“We’re also thinking about traveling exhibits. The idea is that some of the historical exhibits, we would build and launch them here. After that, we would be sending them out. After all, we are the American Jazz Museum. Our boundaries are not just Kansas City. It’s the world.”

Kositany-Buckner’s optimism is infectious. But at the same time, she understands the reality of how Kansas City’s jazz district is often seen locally.

“Part of the challenge that we have is a perception issue,” she explained. “There is a lot going on. Jazz storytelling was in place before I came here. Thousands of kids come through those doors for tours day and night. The Blue Room is jamming four nights each week. The Jammin’ at the Gem series is selling out. There is a perception that nothing is going on but something is going on. Part of the community has embraced 18th and Vine but the larger community has not. As we infuse the funding into 18th and Vine, we want to start a another conversation on changing that perception.

I’ll give you an example. Two months ago, a couple walks in here. Staff started talking to them. They’re from Norway. Because of the centennial of [the birthday of] Jay McShann, they skipped every city in the United States, everywhere, and landed in Kansas City to find out more about Jay McShann. They were excited about the museum and being in the vicinity where jazz was created. You should have seen them.

“We get people from all over the nation and all over the world and they love it. But Kansas City says, nothing is happening there. Something has to change.”

The district is starting to work cohesively. They are participating in First Fridays, the Crossroads street celebration, establishing the area as an eastern anchor.

“For First Friday, everybody was at the table. We all came together and said we want to do this. We’re excited. We feel it was successful. All of the businesses and the cultural institutions from the district sat down and planned that First Friday.

“So I know we can do it.”
Posted by kcjazzlark No comments:
Email ThisBlogThis!Share to TwitterShare to FacebookShare to Pinterest
Labels: American Jazz Museum, Cheptoo Kositany-Buckner, jazz, kansas city
Newer Posts Older Posts Home
Subscribe to: Posts (Atom)