She was out of town the better part of a year in theater productions. So, one of the best statements we can make about the state of jazz in Kansas City today is this: Eboni is back.

Singer Eboni Fondren takes the stage and takes control. And when she surrounds herself with musicians the caliber of pianist Charles Williams, bassist Tyrone Clark, drummer Mike Warren and saxophonist Ian Corbett, you know you’re hearing an ensemble without a weak link within earshot.

That was the case a couple Fridays ago, on July 17th, at The Broadway Kansas City (formerly The Broadway Jazz Club). Photos are below, just in case you made the mistake of not being there. As always, clicking on a shot should open a larger version of it. 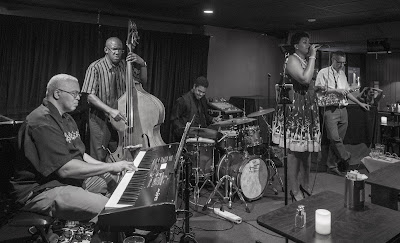 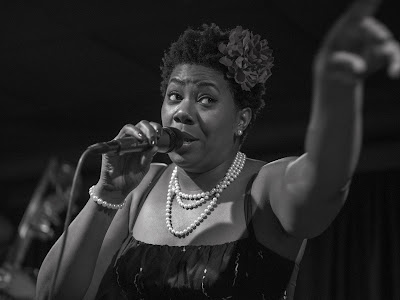 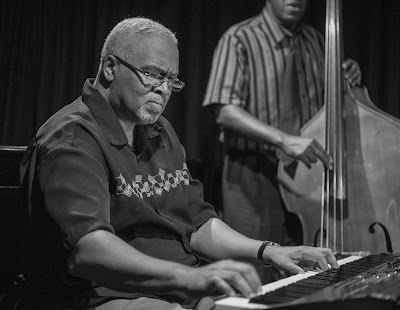 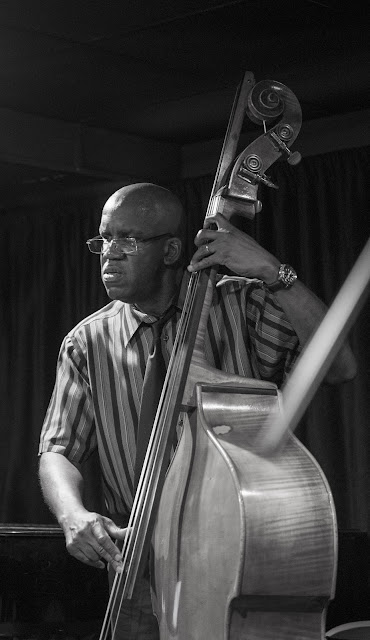 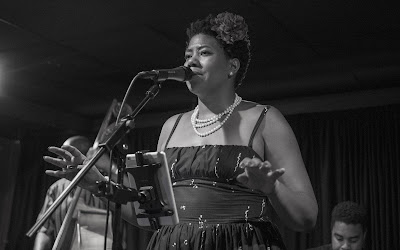 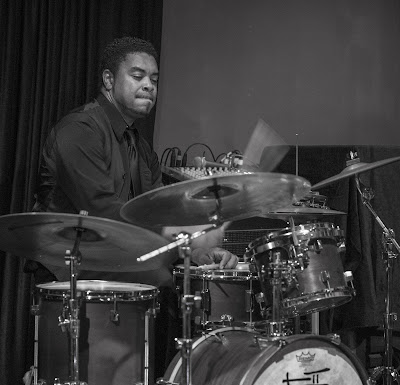 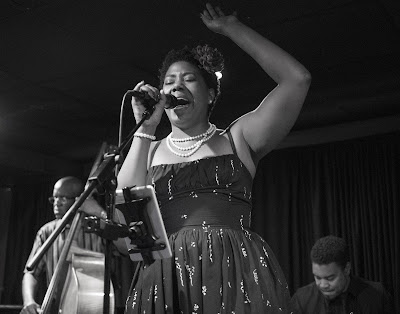 Eboni framed by Tyrone and Mike 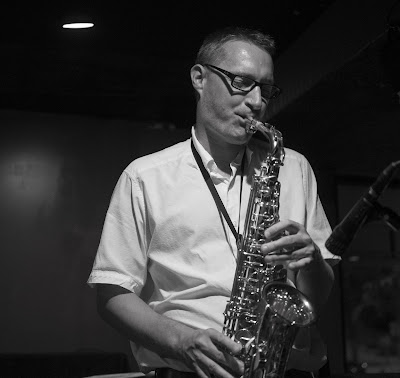 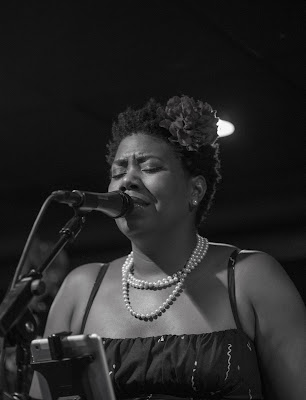 Eboni at the microphone 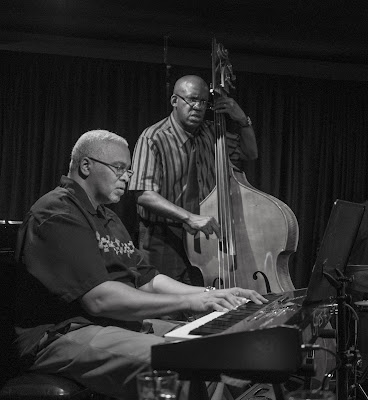 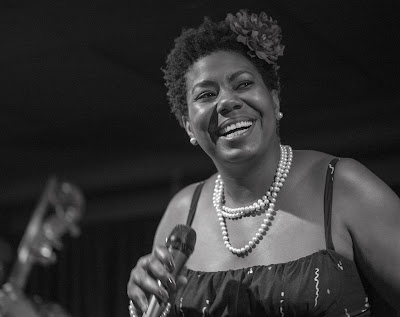 Wrapping the Show and Tell

In September, the American Jazz Museum celebrates 18 years since its opening. For the last eight of those years, Greg Carroll has served as CEO. Last week, Carroll “resigned” from that position.

Greg Carroll didn’t build the American Jazz Museum. He didn’t stock it with Ella Fitzgerald’s dress or Charlie Parker’s plastic saxophone. But run an institution for eight years and you leave your imprint.

For starters, Carroll leaves the museum with an exceptional staff. Staff that has turned the Blue Room from losses to profits. Staff that has moved the museum’s marketing from stodgy print ads to a twenty first century internet presence, and public relations efforts that recognize and build on the institution’s unique presence. Staff that reaches into the community to pull in students and educate. Staff that has raised over $240,500 from public donations to fund general operations. That’s not enough money to pacify the city, apparently, but it’s more than any other Kansas City jazz organization has raised, ever.

Carroll turned a too grand festival into a tighter event that fits the crowd size 18th and Vine will attract. I disagree with its broad range of music styles. The pop group War playing “Cisco Kid” doesn’t fit a jazz and blues festival. Worse, it sends the message that jazz and blues alone can’t sell enough $25 tickets to fill the museum’s back yard. I don’t buy that view. And it’s an inappropriate message to be sent by the American Jazz Museum. But give Carroll credit for reviving the money losing and, for a year, dead Rhythm and Ribs Festival and re-conceiving it as the profitable Kansas City’s 18th and Vine Jazz and Blues Festival.

The museum under Carroll has been a founding and driving force behind KC Jazz Alive, uniting nearly all Kansas City jazz organizations in a way rarely seen in this community. The second annual Charlie Parker Celebration will span ten days next month, culminating with the resurrected Twenty-One Sax Salute at Parker’s gravesite on what would have been Bird’s 95th birthday. I was dubious when first told of the multi-day celebration last year, but it was a grand success thanks in large part to the support of that professional museum staff.

Special events like a festival and celebration are key to drawing people into a district too many still consider a precarious trip. It’s not, but it’s an image 18th and Vine struggles to overcome. That’s not new. A 1979 study on repurposing the armory building at 18th and Highland noted that even then many were afraid to come to 18th and Vine after dark. It’s not the museum’s fault.

News stories on the American Jazz Museum routinely sheathe it in a disappointing – that’s a euphemism for failed – redevelopment project. No question, 18th and Vine needs restaurants and shops. But when shown an early concept for rebuilding the district in the late 1980s, my reaction was that people will not flock to an oasis surrounded by a moat of industrial buildings and blight. Today there’s not nearly the blight that dominated the area back then, but it still takes a knowledge of the neighborhood or a leap of faith to drive 18th Street from the Crossroads to The Paseo. It’s safe. But few sights along the way reassure.

News stories suggest the city expects the museum to depend on it less for sufficiency. Yet, look at the city budget. The Liberty Memorial has $771,501 coming. Union Station is in there for $308,400, and the Kansas City Museum for another $408,305. The American Jazz Museum was budgeted to receive $466,094. Some of those other institutions have dedicated taxes flowing their way. Good for them. But why is it reasonable to expect the American Jazz Museum to thrive with less support than the others? News reports say the museum was expected to be more self-supporting by now. Well, city, the entire district was expected by now to have shops and restaurants and oodles of people walking its streets noon to night. The museum is an anchor but alone it will never be the jazz district’s salvation.

Nonetheless, the museum can do more to pull the public into Kansas City’s rich heritage. Exhibits are interesting but stale and offer little incentive for a return visit. And consideration needs to be given to how, outside of Blue Room and festival programming, this museum of jazz can tie into an increasingly vibrant and exciting Kansas City jazz scene.

A wonderful new web site, Inside Jazz Kansas City (here) offers the musicians’ perspective on what is going on in Kansas City jazz today. In an opening day column for the site, trumpeter Clint Ashlock wrote this:

“We have many flagship groups that are as we speak developing a NEW Kansas City sound - something that hopefully our city will speak of soon with as much reverence as it does Basie, Williams, Parker. There are great things happening in Kansas City jazz right now. We have something exciting brewing, and venues who are starting to really support it. It's a really cool time to be here, right now.”

This is a growing, evolving jazz scene. Who ties it all together? Who examines the history, the up-the-Mississippi-from-New-Orleans-but-something-different-happened-here story of jazz, its expansion into bebop and fusion and all the other sidebars, its influence on rock, then its continued recasting into newer sounds and ideas and experiments? In Kansas City today, a fan can be immersed in jazz. But who is embracing the complete story? Who is wrapping their show-and-tell around the ongoing advancement of the music?

This weekend was close for the August/September issue of Jam magazine, my first solo flight as editor. That means this weekend was not one with spare time for a blog post. The upcoming issue of Jam is exciting, with a genuine surprise. I’d tell you what it is, but then it wouldn’t be a surprise when the issue comes out. So instead, I’ll tease. And promise a real post next week.
Posted by kcjazzlark No comments:
Email ThisBlogThis!Share to TwitterShare to FacebookShare to Pinterest

I remember him with wild hair, sticking way out, playing guitar with Ida McBeth downstairs at The Point. Someone else at The Blue Room on Friday night remembered taking guitar lessons from him, probably a quarter century ago.

Steve Cardenas moved to New York a couple decades back. There, he’s built a sterling reputation and performs with the jazz elite. But last week he returned to his hometown for shows at Take Five and The Blue Room. He played some Monk and an Ornette Coleman composition, but mostly he showcased his own music, contemporary jazz that pulls and engages. Listen and, more than once, you could still hear those Midwest roots.

Accompanying Cardenas to KC was acclaimed New York bassist and composer Ben Allison, They were joined by KC drummer Brian Steever. At The Blue Room, Matt Otto and Stan Kessler each joined a couple numbers.

Below are photos of how Friday at The Blue Room looked. As always, clicking on a shot should open an larger version of it. 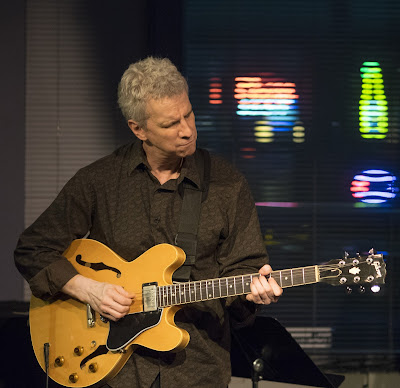 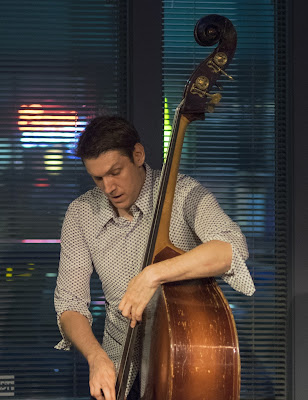 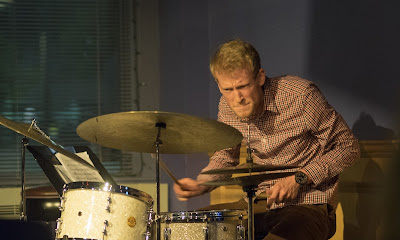 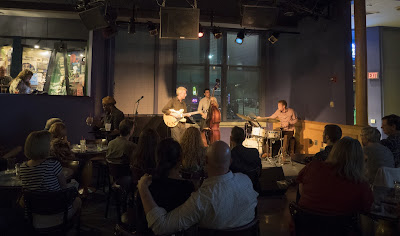 The Steve Cardenas Trio at The Blue Room 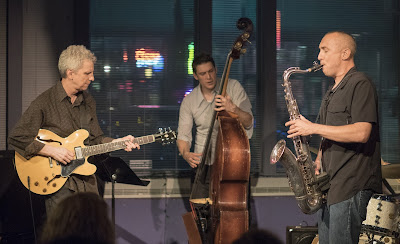 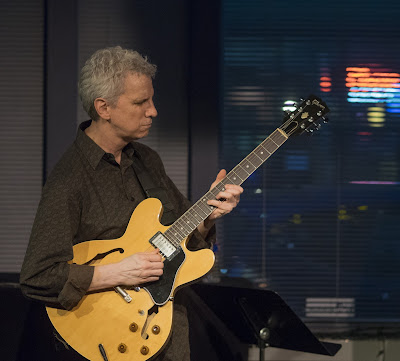 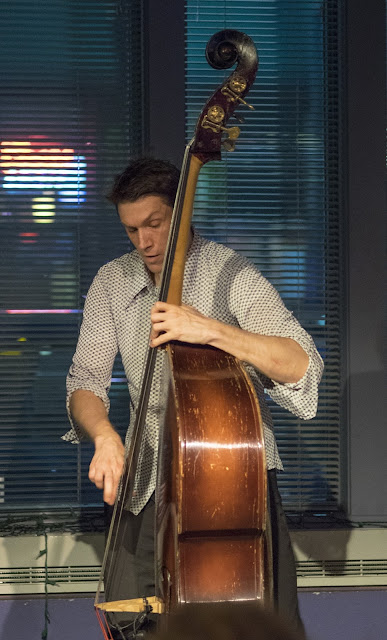 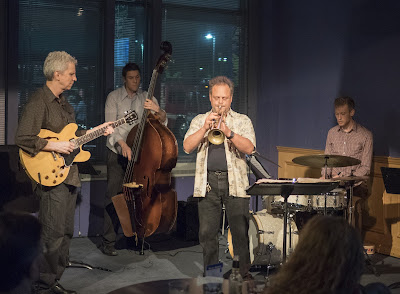 The trio plus Stan Kessler on trumpet 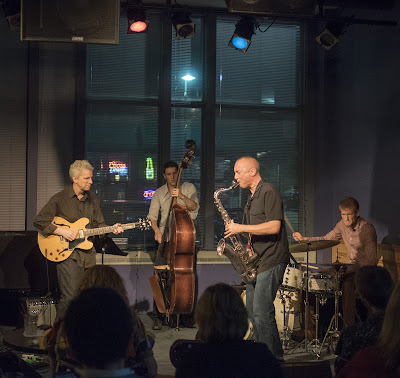 The trio plus Matt Otto on tenor sax 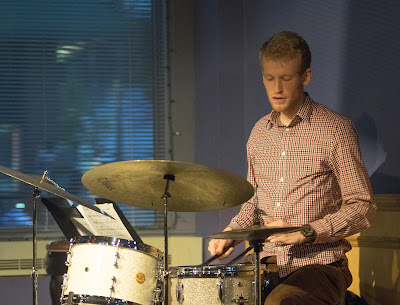 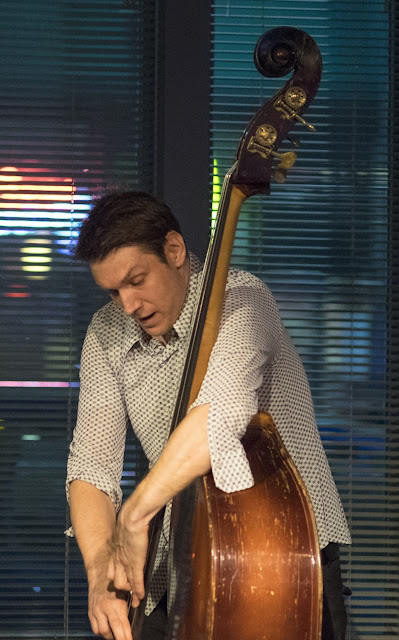 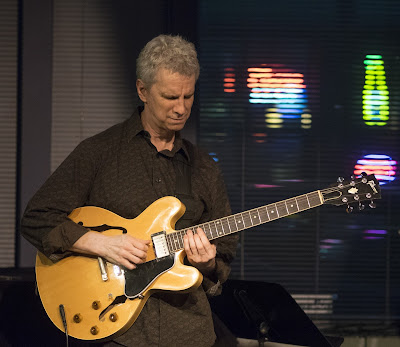 Steve Cardenas in The Blue Room