If you’re grumpy right now and want to stay that way, or if you’re mad at someone and not ready to get over it, or if you just don’t want to feel good at this moment, be advised: The first selection below is some of the funnest music you'll ever hear.

Don’t say I didn’t warn you.

Last week I posted four tunes from the 1985 18th and Vine Heritage Festival (here). It was a street festival which ran through most of the 1980s and into the 1990s, before the district was rebuilt. The main stage stood on what was then a grassy lot at 18th and The Paseo. Another stage was erected in a grassy lot at 18th and Woodland, across from the Kansas City Call building, right about where Friends of Alvin Ailey office today. In between, 18th Street was closed and, for a September weekend, home to street vendors.

1985’s headline act starred Jay McShann on piano, Buddy Tate on tenor sax and clarinet, Al Grey on trombone, Milt Hinton on bass and Gus Johnson on drums. Below are four more numbers from that remarkable group. The recordings are far from perfect. They were recorded by an audience member sitting in the grassy field. You’ll hear voices and ambient noise.

But unless you were at the festival, this is Kansas City jazz you’ve never heard. Even if you were there, odds are you haven’t heard this music since. And especially after you listen to the first song below, an eleven-plus minute version of All of Me, I doubt ambient noise is going to matter. Not unless you’re bothered through the big smile you’re going to have on your face.

So have some fun and listen.

A couple weeks ago, to make a point, I posted live recordings of Jay McShann which you’ve never heard unless you were at the 1986 Kansas City Jazz Festival.

This time, let’s go back a year earlier. Jay McShann also led the group which headlined the 1985 18th and Vine Heritage Festival, a street festival started in 1983 in the not-yet-redeveloped historic jazz district. The main stage stood on a grassy field where you’d once find the Street Hotel and today will find a sports bar.

This group stars Jay on piano, Buddy Tate on tenor sax and clarinet, Al Grey on trombone, Milt Hinton on bass and Gus Johnson on drums.

These recordings are far from perfect. They were captured with a recorder from an audience member sitting on that grassy field. You can hear voices and ambient noise.

You can also hear some terrific Kansas City style jazz.

I have just one request of you:

This 'n That 'n Free Winterlude

The first year, it snowed the day before. I worked the box office at the event, as a volunteer. People called to see if the festival was still on, before venturing out of their home. That was not a good way to build an audience.

Johnson County Community College (JCCC) staged its first Jazz Winterlude in January, 2010. While the schedules have been filled with some of the best local jazz, tickets priced at $25 and up, more than snow, may have kept interested audiences from growing into jazz crowds.

All concerts at Jazz Winterlude 2013, set for January 18 and 19, are free to everyone. And this is a schedule Kansas City jazz fans will find exceptional. Take a look:

JCCC’s Yardley Hall is one of this region’s most acoustically magnificent spaces. The opportunity to hear Deborah Brown’s vocals and Eldar’s piano in there is an exciting one. These are dates to set aside now.

Even if it snows. 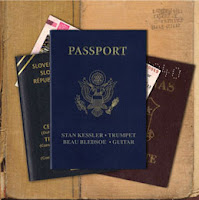 Is gliding the word I’m looking for? Maybe soaring? In some songs, it’s both. Tangos Flamenco for example. Stan glides over Beau’s intricate rhythms before taking off and soaring with excitement. Here’s two masters of their instruments playing world music with intricacy and exhilaration. And fun.

I've photographed guitarist Beau Bledsoe with his extraordinary Turkish jazz group Alaturka (here). They play Saturday’s Winterlude date. Trumpeter Stan Kessler performs with more groups than I can count, the best known being Sons of Brazil. I photographed them here. Together, Beau and Stan have formed the group duo Passport, playing music with a world bent. Is it Latin? Cuban? Spanish? South American? I suppose all of the above.

Beau lays down rhythms on guitar and oud mesmerizing yet complex. Some tunes are familiar, such as Ave Maria, where Stan’s perfect tone overlays feelings of beautiful melancholy. Meanwhile, Que Nadie Sepa Mi Sufrir bounces with playfulness. The interaction between the two musicians on Choro Por Ze draws you in with a broad smile.

Is it jazz? Is it world music? Yes. But mostly – no, entirely – it’s wonderful music.

Passport can be purchased here. 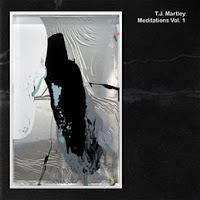 I first heard T.J. Martley in 2009, filling in for Mark Lowrey with Shay Estes’ group. I photographed the evening here. Shay turned to the audience at one point and, pointing at T.J., said, “Isn’t he great?”

This CD of piano solos is an album of trains of thought, musical impressions of the moment. Sometimes obtuse like Monk, consistently engaging, a close listen pulls you into the music’s appealing twists and complexity.

Meditations, Vol. 1 can be downloaded from iTunes here or purchased on CD here.

Survival of the Fittest

Poor people of the year 2042. Apparently, they will not swing.

In an engaging post a week ago (here), our friend Plastic Sax posits that jazz in 2012 falls into three categories. One of those three is swing, and that, he speculates, will dwindle to insignificance when those of us born prior to 1960 (I date to 1957) kick the bucket.

Figuring we should be dust in another thirty years, then all vestiges of anyone who lived when music swung will have cleared the earth so hip hop and its descendants can rule the musical world.

Of course, by that reasoning, the Beatles, too, will be forgotten. And The Rolling Stones. And Bob Dylan. And Englebert Humperdink.

Okay, maybe some good will come of this.

Plastic’s post is about musicians taking jazz in new directions. That there will always be, and thank goodness. Because I’m as big a fan of the People’s Liberation Big Band of Greater Kansas City  (PLBB) as I am of The Kansas City Jazz Orchestra (KCJO). The two are polar opposites when discerning the sounds of big band jazz. Like Mingus and Basie.

Yet both find an audience in Kansas City. That’s because both play music that’s accessible, albeit through different means. KCJO swings a sound that may make your body sway in its seat. PLBB peppers music some could find obscure with wit that draws a crowd in and invites you to listen and understand.

Because while it’s easy to focus on what musicians want to play, the coin’s other side is what audiences want to hear. I’ve written before about finding some of the music of KC’s younger jazz generation overly off-putting and inaccessible. I suspect some of that comes from youthful experimentation and striving for a unique voice. If that voice finds its audience, terrific. But if audiences do not accept it, opportunities to perform it publicly will pass.

A perfect example of an exemplary young group understanding their audience was Diverse at this year’s Prairie Village Jazz Festival. I’ve heard Diverse play tunes which would be appreciated mostly by the jazz literati. But their set this day was dominated by music recognizable to a suburban crowd. It was performed in Hermon Mehari, Ben Leifer and Brad Williams’ unique style. Nothing was artistically compromised. And the audience loved it. The audience heard the wisdom of an emerging maturity.

There’s why traditional jazz will survive. The music is too accessible not to survive. Audiences, some audiences, will want it. So musicians, some musicians, will play it. It’s in our bones. We react to it naturally. There’s why people of the year 2042 actually will swing.

I simply refuse to believe that in the year 2042, nobody will enjoy and want to hear music like this:

I’m not so naive as to believe this music will ever again dominate the culture. Jazz and swing will survive as a niche. Some jazz and jazz musicians will try to merge and absorb contemporary music styles. Miles did it. Others try today. The more accessible of those attempts will stick and through that experimentation, the music will grow.

But in this world breaking down into increasingly tighter niches, swing will survive. Not through nostalgia, but through its overwhelming accessibility.

Because I don’t know about you, but I wouldn’t want to live in a future where nobody loves this (which isn't purely swing, but anything Jay McShann and Al Grey played together in some ways swung):

(The recordings are from the finale of the 1986 Kansas City Jazz Festival, with Jay McShann on piano, Al Grey on trombone, Major Holley on bass and Gus Johnson on drums. Major Holley announces the names at the end of Georgia.)
Posted by kcjazzlark 1 comment:
Email ThisBlogThis!Share to TwitterShare to FacebookShare to Pinterest
Labels: al grey, jay mcshann, jazz, kansas city
Newer Posts Older Posts Home
Subscribe to: Posts (Atom)