The Future of Jazz Is This

What is it about the holidays that brings the vultures out to circle?

Last Thursday, our friend and the original KC jazz blogger, Plastic Sax, decried “shockingly small” jazz audiences. “The vast majorities of entire generations of music fans have been lost,” he says (here). “…It is a crisis.”

He cites pianist Mark Lowrey’s Radiohead tribute, last Friday at the Record Bar, as the type of concept which could pave jazz’s future.

Meanwhile, same day (was there something in the water last Thursday?), Newsweek posted an article titled Jazz is Dead. Long Live Jazz (here). The writer largely (though less succinctly) concurs with the Plastic Sax stance. He praises modern stylists “who can speak to that splintering pop audience.” But, he tells us, it’s time to accept that “as a mass-culture force, jazz is dead.”

It’s true: Jazz as a mass-culture force is dead. Has been since before I started listening over a quarter century ago. All that time, jazz has accounted for around 3% of music sales. Chicago’s web site touts the city's rabid jazz fans, but do the math and the number totals 3% of their population. About 3% of us out here are jazz fans. That’s not a mass-culture force. 97% non-jazz fans qualifies as decidedly not winning the vast majority of music fans.

And it’s true: Some KC jazz audiences have been shockingly small. Only 200 at last month’s Folly jazz series show? That’s embarrassing (I wrote about it here). The small crowd at Kurt Rosenwinkel’s Blue Room show still leaves me miffed at an opportunity lost (I wrote about that here).

And I have no objections to expanding the jazz audience through pop appeals. Jazz once was pop music. Charlie Parker turned Slow Boat to China into a bebop standard. Ella and Sarah sang the hits of their day (sorry, Judy Collins, but the best version ever of Send in the Clowns is by Sarah Vaughan). Miles played Michael Jackson hits. So send in the pop if that will draw new fans.

Maybe, then, these guys aren’t circling vultures to deride? Maybe they’re right? Maybe the size of the jazz audience is a crisis nearly lost?

Well, before I join in kicking the jazz bucket, I have a few questions.

* What’s the next step beyond pandemonium?

I have to ask because a couple Saturdays back, KC Star editor Steve Paul tweeted, “Pandemonium between sets for Shay Estes CD release gig at Jardine’s.” Now, had this been a show with a music style not death-bed-bound, no doubt the scene would have raged beyond pandemonium. What would that have been?

I need to know because that’s how we were sardined into Jardine’s at 10:30 last Saturday night. Every table was filled, every bar stool in use. Yet people kept streaming in. But, of course, if this wasn’t music nobody goes out to hear anymore, I’m sure the crowd would have been larger. How big a crowd would that have been?

* Should I fear the 30-somethings?

Because they were a good percentage of that packed Jardine’s room. And we know they’re part of jazz’s lost generations. So why were they there? What’s their agenda? They’re 30-something jazz fans. And I was sitting next to them. Should I have been afraid?

* Why is Johnson County Community College warping our youth?

I’m concerned because at the Jon Faddis/T.S. Monk performance, which followed a day of mentoring, the upper level of The Blue Room was shoulder-to-shoulder with college students entranced by every note. Why is the college exposing those students to jazz? Don’t the students realize their passion will not be shared by 97% of their peers? Why is the college dementedly allowing this impressionable Johnson County youth to pack a bar at 18th and Vine on a school night?

* One more question: They’re all so young…what is this? 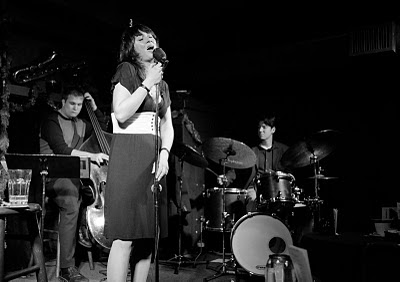 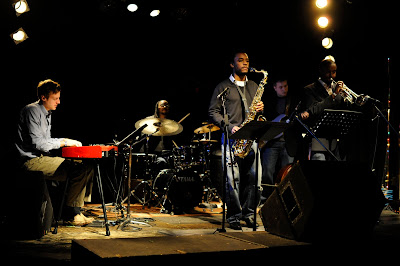 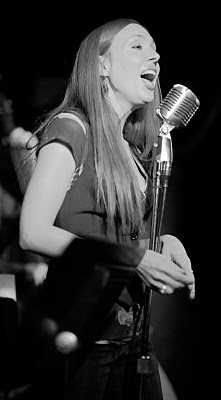 Answer: The future of jazz is this.
Posted by kcjazzlark
Email ThisBlogThis!Share to TwitterShare to FacebookShare to Pinterest
Labels: jazz, kansas city