I’ve written before about the Eblon Theater, which later became the Cherry Blossom, and its unique significance to Kansas City’s jazz history (here).

Which can make it interesting to read news articles from the time of its opening, to understand its perception then.

A modern, reinforced concrete and steel structure costing $60,000 will be thrown open into public when the Eblon Theatre opens its doors to patrons.

Only the finest materials have gone into the building and installation of the fixtures has been done by some of the most competent workmen and foremost firms in the city.

The Coles Theatre Supply company furnished all the theatre supplies in the New Eblon. A new silver screen, 12 by 16 feet, assures patrons of perfectly reproduced pictures. The screen is draped with heavy velour draperies on either side. In the projecting room on the balcony is top be found the last word in motion picture machinery. Two big Powers No. 6B projecting machines are guarantees against breakdowns and poor projection of the films. Power and light will be had from the latest model Westinghouse generator, which with other machinery, was installed by the Coles company.

A complete steam heating plant has been put in the theatre by the U.S. Engineering company, which also had charge of the plumbing installation. A big boiler and its auxiliaries stand as insurance against uneven heat. An air circulation system will provide a change of air constantly, preventing “stuffiness.”

All lumber and millwork that went into the building was furnished from the yard of the Dierks and Son Lumber company. the doors to the lobby, by the ticket taker’s cage and the balcony are all from the millwork department of this company.

Brick work on the structure was done by colored masons.

The general contractor for the building was the E.E. Williams company on Main street, which had general charge of construction and sublet the other contracts.

Nothing had been spared to make the new building one of the finest owned by colored people in the city. The theater has a full frontage on Vine street and extends a half block to the alley. It is but another step in Kansas City’s march to the front in the number and caliber of Negro business establishments maintained.

A photo which ran around the same time was headlined The Pioneer Builder and was identified as Homer (“Jap”) Eblon. The caption read:


The smiling proprietor of the Eblon Theater is here caught in characteristic pose. He smiled in his salad days as one of the popular young men, he smiled when he answered his country’s call and went to La Belle, France, and he smiles now that his hurculcean task is done of building a theater, complete from pit to dome, with every appointment in place, The temporary mixture of freight which has held back his placing the seats, annoys but does not overwhelm him.

The building burned in an arson fire in 1984. Its braced facade still stands at 1822 Vine Street.

The Street Hotel, at the corner of 18th Street and The Paseo, was the preeminent hotel for black patrons in segregated Kansas City. The original Blue Room nightclub and the popular Red Room restaurant were inside.

Here’s a postcard which pictures the hotel: 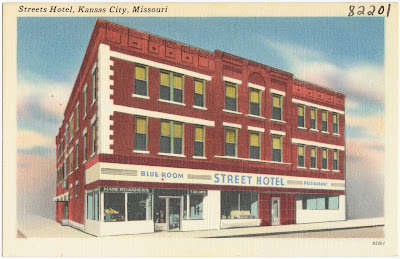 And here’s a photo taken in front of the hotel: 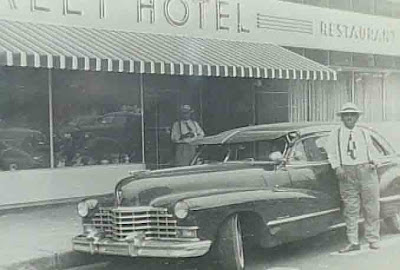 One more shot of buildings lost. This is 18th Street looking west from Highland (across the street from today’s museums). We see a building which no longer exists, the Gem Theater, and the Lincoln Building: 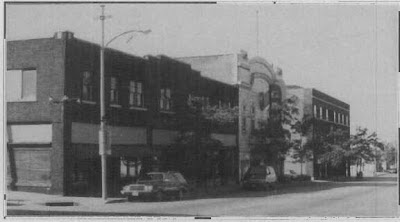