It had been there several times last year, its wings wrapped tight behind its back so nobody would recognize it. It wanted to be discreet, to enjoy jazz on the outdoor patio, nestled in The Plaza, and a drink on a warm summer evening.

Last summer the same singer and pianist played the patio each Wednesday evening, sometimes with guests. They promoted the shows on their Facebook pages, through some tweets, with occasional emails. Crowds filled the deck.

This year the restaurant has chosen to feature different jazz artists each week. The pianist and singer opened the season. The mystical being saw that on the pianist’s Facebook page. And a trumpeter would be playing later this month. That was in the trumpeter’s email newsletter. But who else would be there each week? The Magic Jazz Fairy needed to know, so it could spread the word.

Because, as we’ve established in previous posts, every city has a Magic Jazz Fairy who flies through town at night and whispers in the ears of sleeping jazz fans when and where to find the music, so we wake up knowing, just knowing. That must be the way jazz promotion works because, of course, small crowds couldn’t possibly be the fault of savvy restaurants and bars for not telling anyone they booked jazz.

But before it can spread the word to all of us sleeping jazz fans, the Magic Jazz Fairy needs to know the schedule. Surely this restaurant, with the outdoor patio nestled in The Plaza, this major restaurant, part of a nationwide chain, renowned for exquisite seafood, surely this restaurant has properly promoted their weekly jazz happy hour.

The Magic Jazz Fairy sat down at its computer and, with a quick Google search, found the restaurant’s website. Ah, a tab for Calendar. The mystical being clicked it. Up came this: 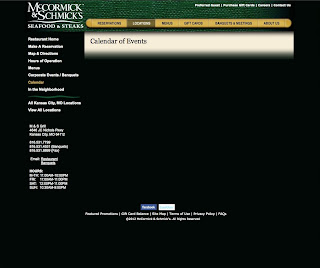 What? A blank screen? A page filled with black?  It clicked back, then clicked the Calendar tab again. Again, a page of black.

How could that be, the Magic Jazz Fairy sputtered. How could the national restaurant with the patio nestled in The Plaza and exquisite seafood, how could that restaurant be promoting its weekly jazz event with a blank, black page?

Did that national restaurant want to know how to promote jazz? the Fairy thought aloud. Did it? Well, then, just look at this website, for a local downtown steakhouse with exquisite steak and jazz every night. Just look at their calendar. The mystical being clicked, and up came this: 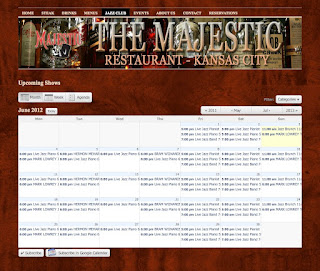 There, see, the Magic Jazz Fairy harumphed. Look at it, and I can tell you that this weekend the jazz group there is...

The Magic Jazz Fairy looked. The calendar said, Live Jazz Band. Okay, I know that, the Fairy thought, but which jazz band? Who? The mystical being clicked a link. A window popped up which told him that playing at the downtown restaurant with exquisite steaks this Friday was...a live jazz band. It clicked Saturday’s link. Playing that night would be...a live jazz band.

Upset and annoyed, the Magic Jazz Fairy declared, “I’ll show you both. Look at this. Look at the calendar for this city’s premiere jazz club in the historic jazz district. Look at how easy it is to find who’s there this Saturday night.”

The mystical being clicked a link, and up came this: 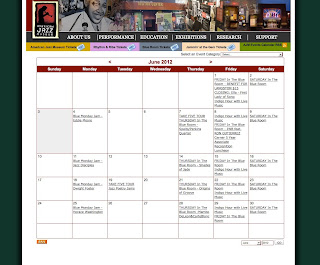 It triumphantly turned to its computer and announced that there this Saturday night was...Saturday In The Blue Room. The Fairy looked again. The jazz club’s calendar described nothing more. It didn’t for half the month.

Anger welled. Ever since a major jazz club closed last year, the music has been more difficult to find. It’s been up to the musicians, through Facebook posts and emails and whatever other communications they could muster with no budget or time, to tell fans where to find them. But too many post the day of the event, I’m here tonight. That’s not good enough. That doesn’t allow for planning. Besides, it forces Kansas City jazz fans to subscribe to the email or the tweets or the Facebook page of every musician they know to have any inkling of where to find them playing jazz.

Red glazed the Fairy’s eyes. It pounded its mystical fist on its desk once, twice. Besides, it maintained, the restaurant or club stands to gain the most through promotion, through more jazz fans showing up and buying food and drinks. It’s not unreasonable to expect a musician to announce a gig on Facebook. But marketing and promotion are responsibilities which lie heaviest on who gains most. Is it too much to expect more than a nebulous listing? Or a black page?

“No!” the being yelled. “Don’t complain that jazz draws nobody when you do nothing to tell anyone who's playing the jazz!”

“Knock, knock” cried the furious being, its wings flapping wildly.

“Who’s there?” answered a feeble voice in its head.

“The Magic Jazz Fairy!" it cried out, its feet off the ground.

“The Magic Jazz Fairy who?” queried the voice.

Enraged, the mystical being flew out a window. It needed a drink.

Or to poke somebody’s eyes out. Euphemistically, of course.