The 18th and Vine Festival was staged in the historic district each September back then. 18th Street was closed between The Paseo and Woodland. A stage was erected at the northeast corner of 18th and The Paseo, another at the northwest corner of 18th and Woodland – both corners then were grassy lots – and the location of a third stage changed from year to year. Vendors lined 18th Street. The Mutual Musicians Foundation was open all day and filled with music, too.

But that year it rained, and the outdoor performances were cancelled. One I was looking forward to was Eddie “Lockjaw” Davis and Harry “Sweets” Edison. That night, “Lockjaw” and “Sweets” relocated to a club then at the corner of 18th and Vine, Eblon, where Danny’s Big Easy sits today. They set up in the corner, right about where a band was playing in Danny’s last Saturday night. And there, backed by Rich Hill’s trio in a noisy club, maybe a hundred of us heard “Lockjaw” and “Sweets” perform some fantastic jazz.

At an outdoor festival, you can control everything but the weather. If you stage a festival enough years, you will be rained out. I know. I was president of the Kansas City Jazz Festival in 1989 when a performance by The Pat Metheny Group – arguably the biggest name of that festival’s Volker Park years – succumbed to a storm. Last year’s Prairie Village Jazz Festival staged two acts before a storm blew in, damaged equipment, and forced the cancellation of the rest of the day’s schedule.

Last Saturday, rain curtailed the 2013 Rhythm and Ribs Festival in the 18th and Vine Historic District. Acts scheduled for The Blue Room and the museum’s atrium went on. But, like “Lockjaw” and “Sweets” in the ’80s, the big names were moved indoors, this time into The Gem Theater. Even with extra chairs and people packing the aisles, The Gem accommodated maybe 600 fans. And with the daylong rain, that was enough. A festival which last year drew a crowd of, by my estimate, perhaps 7000 people, this year counted an audience in the hundreds.

Give the staff of the American Jazz Museum credit. They made the best of a bad situation. Apparently, food vendors (and the ribs) went home. But the organizers staged some outstanding music for those of us who came.

I shot a few photos. Take a look. As always, clicking on one should open a larger version of it. 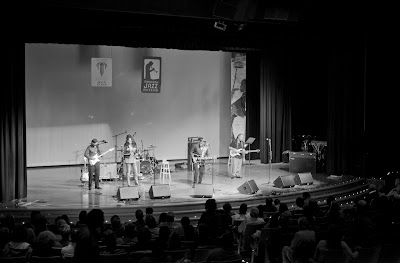 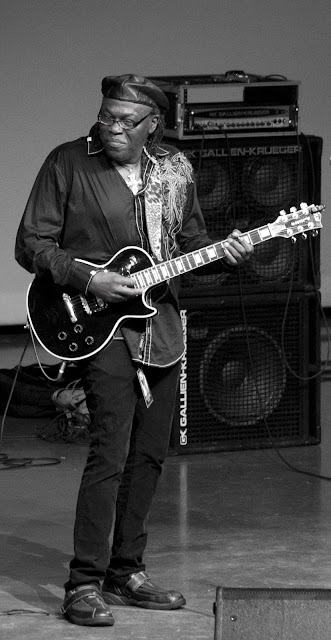 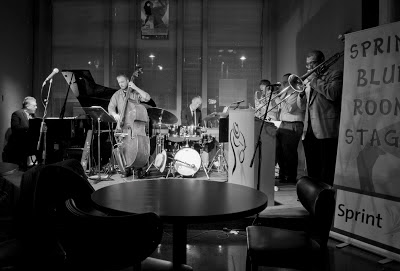 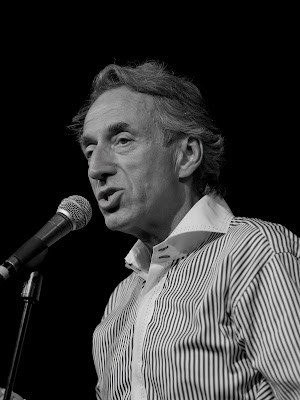 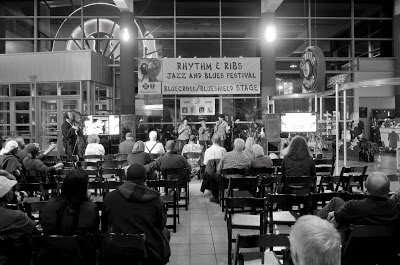 Book of Gaia in the museum atrium 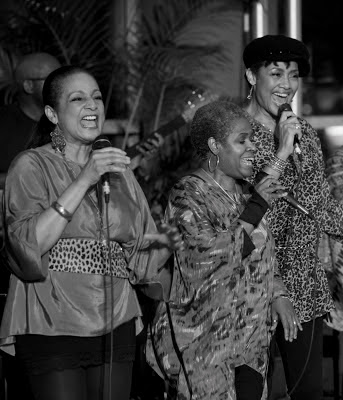 The ladies of Book of Gaia. Left to right: Nedra Dixon, Pamela Baskin-Watson and Angela Hagenbach

Brian McKnight in The Gem Theater

Arturo Sandoval in The Gem