1936 saw devastating temperatures, America’s hottest summer on record. As many as 5000 deaths across North America were attributed to the heat.

In 1936, Count Basie led a band at the Reno Club, at 12th and Cherry. He’d assembled the group the year before, after Bennie Moten’s untimely death.

1936 was the year Jo Jones threw his cymbal at an inexperienced, teenage Charlie Parker to shame him off the Reno Club stage.

Through 1936, Basie’s band was broadcast for a half hour six nights a week from the Reno Club on experimental radio station W9XBY.

After the 1936 election, 21 Kansas Citians were jailed or fined for vote fraud.

In 1936, the night before Roosevelt was elected to his second term as President, Count Basie and his Barons of Rhythm left Kansas City for New York. 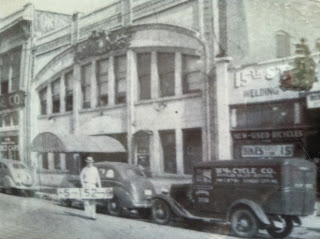 The ballroom at 1414 E. 15th Street (today, Truman Road) had abandoned its identity as The Harlem Night Club and its Whites-only admission policy, and had resumed life as Paseo Hall. Kansas City’s favorite jazz bands played there. Famous black bands traveling through Kansas City from the East might play the Pla-Mor or El Torreon ballroom on a weekend for White audiences, then play Paseo Hall for the Black audience on Monday night.

Before leaving KC, Basie’s band would play a farewell concert at Paseo Hall on Saturday night, October 31st. Then, two nights later, they would return to Paseo Hall to open for a much-anticipated concert by Duke Ellington and his Cotton Club Orchestra.

“Kansas City’s dance lovers are eagerly awaiting the arrival of the one and only Duke Ellington and his celebrated orchestra that will play a one-night engagement at Paseo hall next Monday night, November 2.

“For months talk of Ellingtons’s evening has been on the lips of local fans. The Duke is one of the most popular maestros ever to present his wares here. With typical Ellington swing very much in vogue, a capacity house is expected….

“Count Basie and his Barons of Rhythm, 11 musicians who have skyrocketed in fame within a year’s time due mainly to their distinctive music and regular broadcasts from the Club Reno. The Count, who recently left the Reno in order to start a tour of the Southwest and East under a contract with a prominent eastern booking agency, is a favorite here. His band needs no introduction….”

“…Before we hit the road, we played two more dates in Kansas City.

“The first was a Halloween dance at Paseo Hall that last Saturday night. We advertised it as our farewell dance. They always did like farewells and homecomings in Kansas City, so we called this our farewell thing. But we actually went right back into Paseo Hall that very next Monday night and played our last gig as the local union band. The big headline attraction that night was Duke Ellington…. It was a very special night for everybody, because Duke had been coming to Kansas City for at least several years by that time, but this was the first time he was coming to play a dance at Paseo Hall. All the other times he had been booked into the big theaters downtown…. 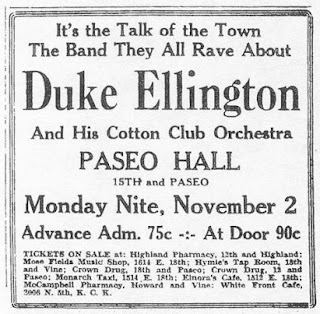 “But I didn’t get to hear him that night in Kansas City, because we went on first, and we couldn’t stay for the main event because we were scheduled to leave for Chicago that very same Monday night. In fact our bus was parked outside, ready to pull out as soon as we finished our set and loaded our instruments. Our suitcases were already on board….

“We went on early, and of course, we did our best to liven things up in there, and we always did. But then when Duke’s famous musicians began arriving, the crowd couldn’t help showing how excited it was about having them there. So as many friends and well-wishers as we knew we had in Kansas City, I don’t think there were many more than about a dozen people who came outside to see us off.

“But Duke himself came out…. That night he made it his business to come outside of Paseo Hall and give us his congratulations and wish us good luck, and he gave me a few words of encouragement and a big pat on the shoulder just before I got on the bus. He was beautiful.

Five years later, by 1941, reformers had taken hold at City Hall. Political boss Tom Pendergast had served time in prison and had been released. Charlie Parker had long since rebounded from being shamed in the Reno and was a rising star in Jay McShann’s big band. But many of KC’s jazz best had followed Basie’s lead and moved to New York. Clubs were closing.

And St. Stephen Baptist Church took over Paseo Hall, converting it to their auditorium. The cornerstone for the St. Stephen building which stands today at Truman Road and The Paseo was laid in 1945. 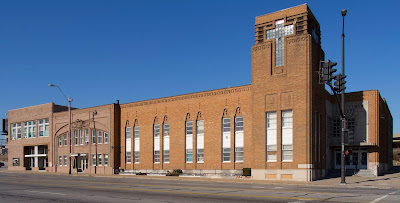 That was Paseo Hall. 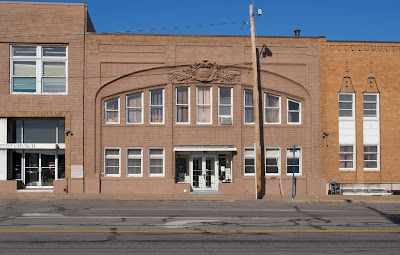