Count Basie, Broadcasting Live From 86th and Wornall in 1935

Today, houses line both sides of the street along Wornall between 85th and 86th Streets, and a church. In 1935, this was the outskirts of Kansas City. Here is where the tower for radio station W9XBY stood. From here, Count Basie and His Barons of Rhythm were broadcast live from the Reno Club six nights a week, and Kansas City jazz was discovered.

W9XBY was one of four experimental high-fidelity stations approved by the Federal Radio Commission in December, 1933.

The Early Shortwave Stations: A Broadcasting History Through 1945 explains:

“There were two aspects to high-fidelity experimentation. One was the establishment of several ‘high-fidelity’ AM experimental broadcast stations on channels just above 1500 kc [kilocycles], the high edge of the standard broadcast band. These were 1 [kilowatt] stations and enjoyed bandwidths of 20 kc rather than the standard 10 kc. The stations were W1XBS, Warterbury, Connecticut and W9XBY, Kansas City, Missouri, both on 1530 kc, and W2XR, Long Island City, New York and W6XAI, Bakersfield, California, both on 1550. These stations could be heard on the popular all-wave receivers of the day, as well as many older sets whose tuning overshot the 1500 kc end point of the AM dial….”

W9XBY was owned by First National Television (FNT), which also ran classes for aspiring engineers. The station reportedly went on the air on December 31, 1934. However, online it’s easy to find W9XBY broadcast verification cards with earlier dates, like this one: 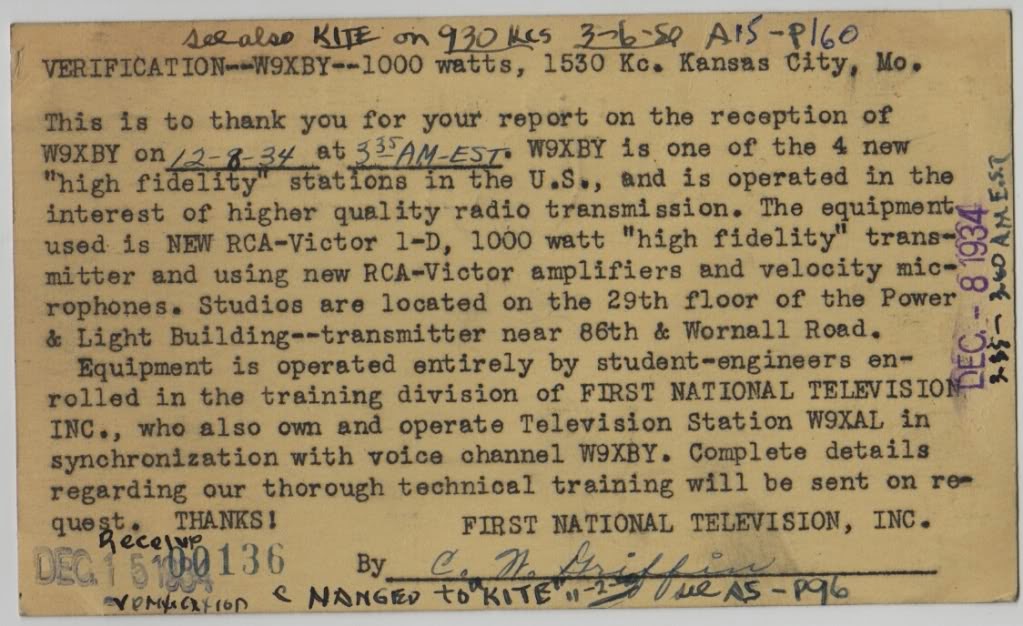 “This is to thank you for your report on the reception of W9XBY on [date and time are handwritten] 12-8-34 at 3:35 AM-EST. W9XBY is one of the 4 new ‘high-fidelity’ stations in the U.S., and is operated in the interest of higher quality radio transmission. The equipment used is NEW RCA-Victor 1-D, 1000 watt ‘high fidelity’ transmitter and using new RCA-Victor amplifiers and velocity microphones. Studios are located on the 29th floor of the Power & Light Building—transmitter near 86th & Wornall Road.

“Equipment is operated entirely by student-engineers enrolled in the training division of FIRST NATIONAL TELEVISION, INC., who also own and operate Television Station W9XAL in synchronization with voice channel W9XBY. Complete details regarding our technical training will be sent on request. THANKS!”

An ad in the March, 1935 Popular Mechanics touted the school:

“Every qualified man I train puts in actual hours at my 1000 Watt Commercial Radio Station! When you have completed my training course, you are a tested radio and television expert – ready to step into the BIG PAY class! You have had actual experience behind you in genuine radio broadcasting work which gives you preference in any radio job. The hours you spend in my ultra-modern, ‘High-Fidelity’ commercial station W9XBY and my licensed television experiment station W9XAL mean dollars to you. Never before have you been offered so great an opportunity! Tune in on ‘High-Fidelity’ station W9XBY – 1530 kilocycles.”

“W9XBY broadcast live dance music late at night.  These remote pickups were manned by an announcer and [an] engineer.  I covered two such pickups on the same night.  The first was at Pusatari's Italian Supper Club….

“After this broadcast, I would pack up and move to [12th] and Cherry to cover a program from a black dance hall. The same announcer shared this assignment. (This was not a nice part of K.C. to visit after dark. But white people did!)

“I set up the W9XBY remote mixer on a small table, off stage, between the dance band and the door to the ladies powder room. The floorshow was so noisy that I heard it seeping into my headphone covers. It took all my attention and both hands to mix the sound….

“The waiter brought drinks for the announcer and me….  The wet glasses ate sticky rings into the fake leather cover of the mixer. As couples left, the waiters cleaned off the round tables by dumping the ashtrays onto the floor.

“The floor show ended with the two male dancers flat on the floor, face to one side, crawling off on their elbows and toes….”

Record producer John Hammond caught W9XBY’s signal late one night in Chicago. He came to Kansas City to see and hear Basie’s band for himself. Basie and his band left for New York in November, 1936.