This 'n That 'n Celebrating August

Two festivals bookended the month back then, the 18th and Vine Jazz and Heritage Festival early in August and the Kansas City Jazz Festival late in the month. Conveniently, both Count Basie’s and Charlie Parker’s birthdays fell during the month. Saks Fifth Avenue, then on The Plaza, hosted a classy jazz awards celebration on a Friday night. Other special events popped up from year to year.

So, in the latter half of the 1980s, the Kansas City Jazz Commission obtained proclamations from the Mayor’s office and from the Missouri Secretary of State – they were easy to get if you submitted the parts about your event written in their style – naming August as Jazz and Heritage Month in Kansas City and Missouri.

The Kansas City Jazz Festival eventually merged with the blues festival and moved to July. The 18th and Vine event moved into September. Saks ended the awards celebrations. And the Jazz Commission stopped asking for August proclamations.

This August may be time for somebody to ask again.

KC Jazz ALIVE, with its freshly-acquired not-for-profit status, has branded a compilation of events as an 18-day Kansas City Charlie Parker Celebration. It mostly promotes already-scheduled-with-no-idea-they’d-wind-up-being-connected-to-Charlie-Parker club dates. But give credit where it’s due. This is an inaugural effort to recognize one of the greatest icons in jazz history, in the city where he was born and raised, a city which until now couldn’t even see the benefit in saving his home or put the right saxophone on his tombstone. 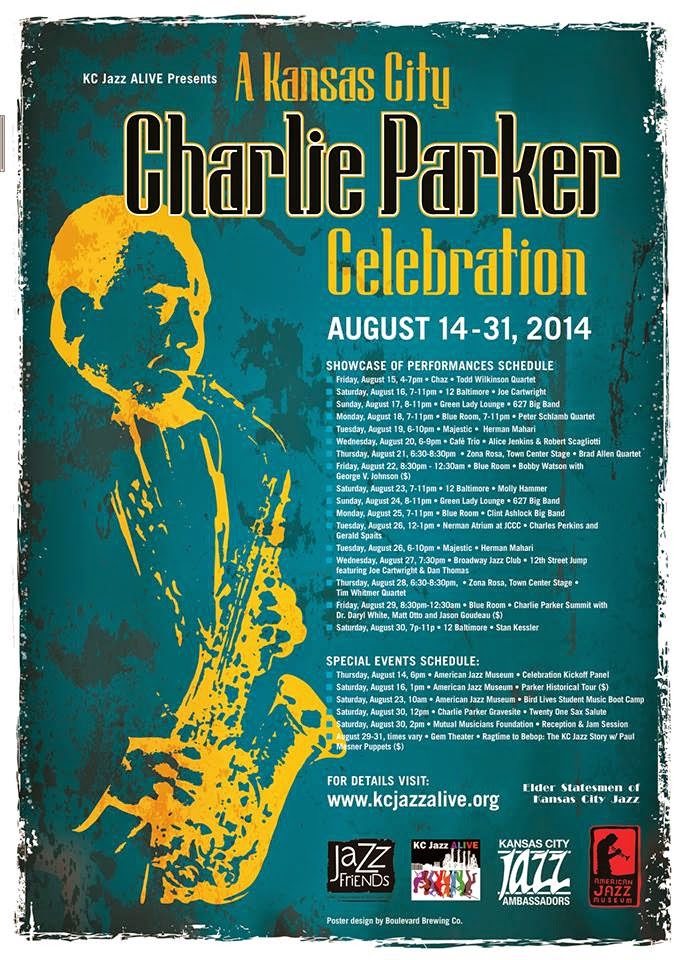 From August 14th through the end of the month, over 18 days, KC Jazz ALIVE will promote the collection of concerts and events as recognition of one of this city’s most culturally important sons, even reviving the Twenty One Sax Salute at Parker’s gravesite at noon on August 30th. Boulevard Brewing has designed an impressive poster.

The 1983 revival of the Kansas City Jazz Festival was a two week collection of events under a single banner. So was the 1984 festival. This format has worked before in Kansas City. It has the potential to bring welcome attention to Kansas City jazz while honoring a legend who should have been honored decades ago.

Unassociated with the Parker celebration but falling within its 18 days is an August 23rd unveiling of a new American Jazz Walk of Fame along 18th Street, between Vine and Highland. Six bronze medallions will be embedded in the sidewalk honoring Count Basie, Mary Lou Williams, Jay McShann, Bobby Watson, Pat Metheny and, of course, Charlie Parker. Sounds much like the bronze stars that once faced a hotel on 12th Street. A concert by the Count Basie Orchestra in the Gem Theater will cap the event. It’s all organized by the Jazz District Renaissance Corporation (though word on the street largely places the office of Rep. Emanuel Cleaver behind the effort).

Last year saw the renovation of homes and the Rochester Hotel along Highland Street, finally surrounding the Mutual Musicians Foundation with the inviting environment it needed and deserved. These medallions will bring renewed focus to 18th Street. It’s good to see architectural enhancements spread throughout the district.

Next year, another event or compilation celebration highlighting dates early in the month could again warrant a proclamation honoring the month both Charlie Parker and Count Basie were born.

(Then the Prairie Village Jazz Festival explodes with jazz just a week into the next month.)

KC Jazz ALIVE is on a roll. Their program at the Folly Theater to introduce musicians to opportunities to earn a living resulted in some musicians taking jobs that will allow them to make money and perform.

Some argue that artists should be able to earn their living as artists. And some artists do. But even Jay McShann drove a garbage truck to support his family. Whether we’re talking jazz saxophonists or poets or portrait painters, the reality today is that only the best of the best artists find full time employment in their art, and even then only those who understand how to successfully sell and market themselves.

KC Jazz Alive’s next step will be to help jazz musicians do just that, setting up a chance for promotional photos.

The American Jazz Museum is also on a roll. They’re one of the key organizations behind the Charlie Parker Celebration. On Wednesday they will officially unveil the lineup for October 11th’s Kansas City’s 18th and Vine Jazz and Blues Festival (will someone slice and dice that name into something manageable?), even though if you follow the right orgs on Facebook, you’ve already seen all of the headliners’ names.

And on top of a successful PEER fundraising effort (noted here), they have won a $133,050 grant from the Institute of Museum and Library Services to add staff to improve collections accessibility. Think easier access to the John Baker jazz film collection in the near future.