Kane, OJT and Sanders: A Trio of CDs

Drummer Matt Kane hails from Hannibal, Missouri, studied at UMKC’s Conservatory of Music, was mentored by Ahmad Alaadeen, then moved to New York. But like so many others, he has seen today’s Kansas City jazz renaissance dominated by young talent. He has pulled together five of those musicians. Michael Shults on alto sax, Steve Lambert on tenor sax, Hermon Mehari on trumpet, Andrew Ouellette on piano, Ben Leifer on bass and Kane on drums make up the group, Matt Kane and The Kansas City Generations Sextet. 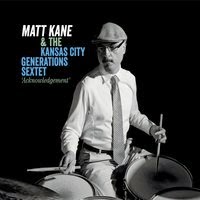 They have recorded a CD, Acknowledgement, performing the compositions of other current and recent KC jazz masters, Bobby Watson, Pat Metheny and Alaadeen. The CD is officially released this week at the Green Lady Lounge with shows on Friday and Saturday nights.

Here’s proof that some of the best young talent playing jazz today is playing the music in Kansas City. These are musicians exploring new ideas and directions with confidence. Shults’s alto intuitively weaves fresh thoughts and grasps new ideas, as on the rambunctious opener, In Case You Missed It. Lambert’s tenor can push aggressively into intriguing spaces, always with a pleasing inquisitiveness, or glide over rhythm with a rich tone as on And the Beauty Of It All. Mehari’s trumpet shows a refinement and maturity that can gently draw you in, unafraid of open spaces – you hear that on ASR – or he can solo fast and hard. Ouellette’s piano is played with enticingly supple finesse. The piano and sax conversation, Jewel, is marvelous. Leifer bass solos tell a story, expecially on Midwestern Nights Dream, riding Kane’s driving drums.

The rhythm section is tight. Credit all of the musicians, but especially Kane, whose accents support and propel, at times with exuberance, at times with subtlety, always with sophistication.

Acknowledgement is a 2015 snapshot of some of the best young musicians playing jazz in Kansas City. It’s a snapshot of music alive and growing.

Acknowledgement by Matt Kane and The Kansas City Generations Sextet can be found on CD Baby here. 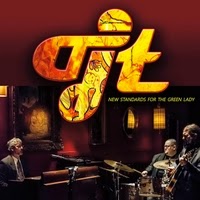 Eleanore Rigby may have never swung harder than this.

From Ken Lovern’s rollicking Hammond B-3 organ, to Brian Baggett’s blues-drenched guitar, to Kevin Frazee’s nimble drums, this is an Eleanore Rigby that makes you want to get up and dance. This is decidedly not for all the lonely people.

It’s one of the New Standards For the Green Lady, a new CD from OJT (that’s for organ jazz trio). OJT regularly plays the Green Lady Lounge.

These standards may be mostly new to jazz, but many titles will sound familiar to listeners familiar with the best of pop in the last century. Besides Eleanore Rigby, among the tunes getting an OJT treatment are Layla, I Kissed a Girl, Everybody Wants to Rule the World and The Way You Make Me Feel. That treatment involves a heavy dose of swing doused in blues. It‘s music that’s going to have you swaying your shoulders to and fro. Don‘t try to resist.

If Acknowledgement is a snapshot of outstanding musicians in KC today, New Standards For the Green Lady captures more terrific musicians in KC having a helluva lotta fun.

New Standards For the Green Lady by OJT is available on CD Baby here and on iTunes here. 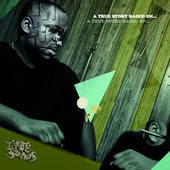 Bassist Dominique Sanders is a young musician absorbing the full range of modern musical influences. Some may call his new CD, A True Story Based On…, electronic music. Some will hear modern music beyond accessibility. Traditional jazz fans will declare that music laced with sound effects and sampling isn’t jazz.

A True Story Based On… is jazz looking forward. This is experimental jazz embracing every tool available to a musician in 2015. There is sampling. There are sound effects. There is the influence of hip-hop. But you can also hear the influence of R and B and funk and Pat Metheny.

There’s a certain amount of over-the-top extravagance here. The same audience is unlikely to embrace both A True Story Based On… and New Standards For the Green Lady. But the fact that you can hear both groups – and The Kansas City Generations Sextet – in KC in 2015 speaks volumes about the variety of jazz this city offers and is supporting.

A True Story Based On… can be downloaded from iTunes here.