This 'n That 'n Other Locales

One year, when I was an organizer of the jazz festival, Joni Mitchell recorded an album which included a well known jazz musician. Another organizer, looking for the biggest draw we could book for the festival, argued that was reason enough to pursue Joni Mitchell as that year’s headliner. Fortunately, his opinion was not shared. Because, as much as I enjoy listening to Joni Mitchell, I cannot imagine a stretch big enough to justify her as headliner of a jazz festival.

But as someone who spent time trying to draw audiences to jazz events, I understand stretching the definition to include acts of questionable pedigree. So I don’t begrudge our local jazz clubs booking some acts that aren’t really jazz. If those other acts draw enough fans to help make up for the nights when only 35 patrons pass through (and I’ve been in the audience some of those nights), well, that’s business.

Still, with only three jazz clubs in Kansas City today (plus the Majestic's nightly piano), any night without jazz is an opportunity lost to hear our outstanding musicians. Which is why it’s so wonderful to see other clubs, ones that don’t often book jazz, booking jazz and picking up some of the slack.

The night started with few there actually listening but ended with a won-over room and wild applause. John Brewer, Ben Leifer, Hermon Mehari and Ryan Lee (left to right in the top photo below) blazed through their first set. I've heard Ben provide solid bass to many groups in KC, but this night he owned some of the most dynamic, complex and engaging bass solos jazz fans will hear. I'm not often a fan of drum solos — just my taste — but Ryan's drew me in with a real beginning, middle and end. The only horn on stage for the first set, Hermon's solos exploded with an unbridled energy that I never wanted to end. Though John's electronic vocal manipulations were not my favorite (maybe I'm just too much an old traditionalist), the crowd loved them. I, on the other hand, loved his organ sound solos. Young saxophonist Matt Chalk (he's the new face in the second shot) joined them for the second set, and the room was theirs.

Czar Bar did the evening right, playing Charlie Parker music between sets (that's more legit between-set jazz than I often hear at a certain downtown jazz club). If you weren't there, just look at what you missed: 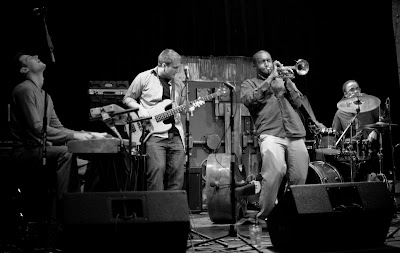 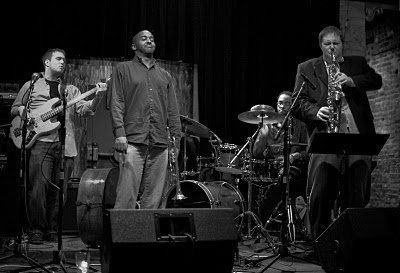 Then there’s R Bar, a new restaurant and bar in the West Bottoms (web site here). A long narrow room with brick walls and a stage in the front window, on first glance it doesn’t look a likely space for music. But when I was there several Fridays back to hear another favorite, Shay Estes and Trio ALL, the place was packed. After adjusting the sound system between sets, the listening was great (the music by Shay, Mark Lowrey, Ben Leifer and Zack Albetta, it goes without saying, was outstanding).

I mentioned when walking in that it was my first visit, and the staff went out of their way to make it a good one. They moved me from standing room only in the back to a table up front with some guys who didn’t care if a stranger nabbed their extra chair.

I didn’t try the food that night. I will next time. Because I will be going back. R Bar features jazz every Thursday and some weekend nights.

Meanwhile the Record Bar (web site here), site of Diverse’s last KC show, is one of a trio of locales to host big bands. It’s where The People’s Liberation Big Band plays a Sunday of most months. Harling’s has no web presence that I can find, so you just have to know that you’ll find Clint Ashlock's New Jazz Order Big Band there from 9 pm to midnight most Tuesdays. And B.B.’s Lawnside BBQ (web site here) may be deservedly known for the blues, but it’s also home to the New Vintage Big Band the first Wednesday of each month.

And let's not forget The Drum Room in the President Hotel and The Oak Room in the Intercontinental Hotel. They join other odds-and-ends where jazz can be irregularly found, all listed in the Plastic Sax calendar (linked at the right).

Add these up and they may not total another jazz club, but they’re sure nice plugs to some of the KC jazz club gaps. I, for one, will head wherever great jazz will be found. 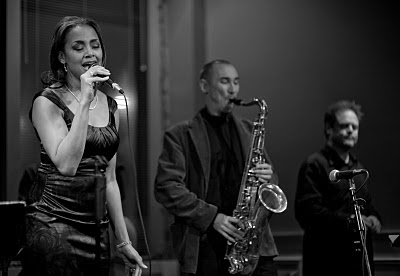 Angela Hagenbach is among the regulars at R Bar (she's there this Thursday, in fact). This summer she celebrates 20 years singing jazz in KC. I remember first hearing her nearly that long ago at an 18th and Vine festival, and I'm not sure she's aged a day since. Proof is in the photo above, captured when I had the good fortune to catch her last month at The Blue Room with both Matt Otto on sax and Stan Kessler on trumpet (Stan I was also listening to way back then. How come he and Angela have no gray hair and I have little but? Not fair!).