The Second Most Historic Jazz Structure in KC

All that remains is a facade. But I contend it’s the second most historic jazz structure in Kansas City, because of what happened behind that facade. If you know some KC jazz history, you may know the stories. But odds are you didn’t know they happened here.

KC’s most historic jazz structure is the Mutual Musicians Foundation. But next time you’re in the area, stroll south on Vine from 18th Street. Maybe two-thirds of the way down, on your right (west) side, you’ll find a two-story wall braced from behind. The building it fronted is long gone (it extended as deep as the still-standing building next door). Weeds tower behind it. Doors are covered with boards. 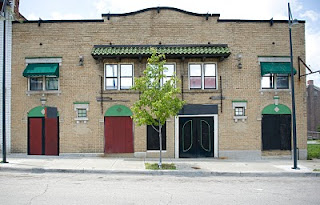 Those doors first opened in 1923 to an auditorium showing silent films, accented with velour drapes, seating 1000. The Eblon Theater, at 1822 Vine, was described in The Kansas City Call as “keeping with the plans to make it the best theater owned by Negroes and catering to Negroes.”

But it’s the stories that bond the building to jazz history.

Like the one about the stranded piano player. TOBA (Theater Owners Booking Association), the black vaudeville circuit, started in New York and toured west to Kansas City, then reorganized before returning east. In 1927, a young piano player was left here when the act which brought him disbanded. So he took a job playing organ to the silent movies in the Eblon.

His name was Bill Basie.

In spring, 1933, remodeled and converted to a night club, the Eblon was rechristened the Cherry Blossom. In his autobiography, Good Morning Blues, Basie, then in Bennie Moten’s band, described it: “It was designed to look like an oriental spot. All of the decorations were Japanese, including a Buddha on stage, and the waitresses wore costumes that made them look like they were Japanese. That was about as far as it went. You couldn’t get any Japanese meals in there or anything like that.”

George E. Lee’s band opened the Cherry Blossom and played the first few months before being replaced by Moten’s group. By fall, the ambitious Moten was ready for another venue. But band members wanted to stay. Moten’s was a commonwealth band, meaning each member held an equal vote. The band voted Moten out as leader and Basie in.

The band’s name was changed to Count Basie and His Cherry Blossom Orchestra.

Basie: “That was the first time I was actually billed as Count Basie….The truth is that I named myself Count Basie back when the Cherry Blossom was still the Eblon Theater.”

An article in The Call, reporting the turmoil, noted the band’s new leader was a piano player “who calls himself Count.”

A commonly told tale says a radio announcer bestowed Basie with the title of Count during a broadcast from the Reno Club. That’s wrong. Those broadcasts started three years later.

(The band later broke up and its members, including Basie, rejoined Moten.)

The Cherry Blossom was also site of the infamous battle of the saxes with Coleman Hawkins. Hawkins (nicknamed Bean), king of the tenor sax, was visiting KC with Fletcher Henderson’s band.

Hawkins did not join jam sessions. But that night, said Basie:

“Herschel [Evans] and Ben Webster and Lester [Young] and a few others were up there jamming, and Hawkins came by….Somebody kept asking him to play, so he finally went across the street to the hotel, and…he came back in with his horn….

“All those other saxophone players were up there calling for their favorite tunes, and then Hawk went up there, and he knew all of the tunes, and he started calling for all of those hard keys, like E-flat and B-natural. That took care of quite a few of the local characters right away. Not many piano players were eager to mess with that stuff. I knew I wasn’t.”

“I happened to be nodding that night, and around 4 a.m. I awoke to hear someone pecking at my screen. I opened the window on Ben Webster. He was saying, ‘Get up, pussycat, we’re jammin’ and all the pianists are tired out now. Hawkins got his shirt off and is still blowing. You got to come down.’

“Sure enough, when I got there Hawkins was in his singlet taking turns with the KC men. It seems he had run into something he didn’t expect. Lester’s style was light and...it took him maybe five choruses to warm up. But then he would really blow, then you couldn’t handle him on a cutting session. That was how Hawkins got hung up.

“The Henderson band was playing in St. Louis that evening, and Bean knew he ought to be on the way. But he kept trying to blow something to beat Ben and Herschel and Lester. When at last he gave up, he got straight in his car and drove to St. Louis. I heard he’d just bought a new Cadillac and that he burnt it out trying to make the job on time.

“Yes, Hawkins was king until he met those crazy KC tenormen.”

The legend of Kansas City jazz was cemented behind that facade.

The building was later renovated as another club, the Chez Paree. By 1944, it was home to Jay McShann and singer Walter Brown. 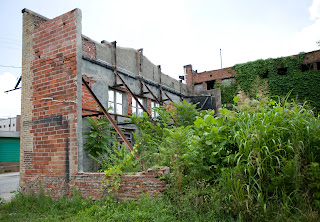 On August 2, 1984, at 2:54 p.m., a two alarm fire was reported at 1822 Vine. Six pumper trucks, four ariel trucks and 44 fire fighters responded. The blaze was declared under control 28 minutes later. The fire was classified as arson.

Efforts were made to stabilize the walls and salvage the structure. But in the end, only the facade could be saved.

At the time of the fire, the building had sat empty for over twenty years. Between that and its historical significance, officials could not make a damage estimate. 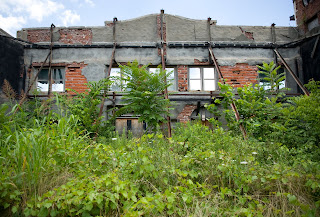 I know the value. The ghosts behind that facade are priceless.
Posted by kcjazzlark
Email ThisBlogThis!Share to TwitterShare to FacebookShare to Pinterest
Labels: 18th and Vine, Cherry Blossom, Eblon, jazz, kansas city