They brought out more chairs, though I’m not sure where they put them. The Blue Room was packed, standing room only, last Monday for the official CD release party for Bobby Watson’s The Gates BBQ Suite. The UMKC Concert Jazz Orchestra was there, peppered with outstanding graduates, to perform the suite, just as they do on the CD. Complimentary Gates barbecue was available to all.

Music by Bobby Watson and the UMKC Concert Jazz Orchestra and free Gates barbecue. Does life really get any better than this?

If you weren’t there, the best you can do now is to go out, pick up the CD and some barbecue, then listen (and eat) at home. Depending on where you live (because I know this blog is seen outside of KC), no guarantees on the quality of the smoked meats. But with the CD, you can’t possibly go wrong. 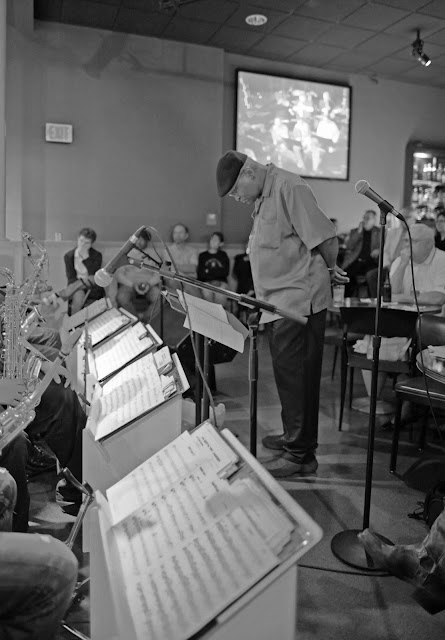 This CD, The Gates BBQ Suite, is Kansas City music, happy and swinging. Watson captures the joy in compositions with titles anyone from this town will recognize: May I Help You?, Beef on Bun, Heavy on the Sauce. And he captures the sorrow of arriving just after closing time in One Minute Too Late! (been there; I can relate). You want to swing the blues? Then you want Blues for Ollie.

Yet, what may strike me most is the mastery of the UMKC Concert Jazz Orchestra. Here’s some of the stellar young musicians dominating Kansas City jazz today, proving again their excellence. Watson was asked on KCUR’s Up to Date (here), why record in Kansas City and not with the better known musicians of New York? His answer:

“Well, we had lived so long with the piece, and there were a lot of intrinsic things in there that, I knew it wasn’t going to come out, so it was a trade-off. You might of had, maybe, some star power, whatever, but we wouldn’t of had as much time to work on it. I mean, we worked on this piece for quite some time, and to me, nobody right now plays it better.”

He’s right. Just listen on this CD, to the frenetic yet precise sax back-and-forth between Will Sanders and Steve Lambert on Beef on Bun, that wicked bass by Ben Leifer and driving drums of Ryan Lee on Wilkes’ BBQ, the intelligent and swinging trumpet by Hermon Mehari on May I Help You?, or the swinging trombone of Ben Saylor on Heavy on the Sauce!

(And let’s not forget Bobby Watson’s solos on One Minute Too Late! and Heavy on the Sauce! But why’d he get to solo on all the titles with an exclamation mark?)

There’s a spirit of fun fueling all of these compositions, with the right mix of musicians to envelop and throw right back at us that special feel of Kansas City barbecue and jazz. 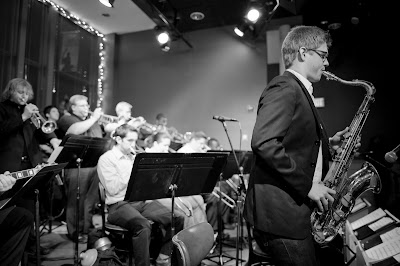 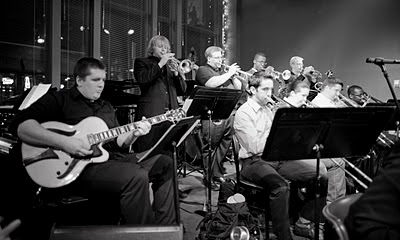 Bobby Watson and the UMKC Concert Jazz Orchestra leave this Friday for an 8-day trip to Kurashiki, Japan (a sister city of KC) to share some real Kansas City jazz. The Blue Room show opened with a half hour preview of some of the swing they’ll be performing there along with movements from The Gates BBQ Suite.

Kurashiki, Japan, I can tell you that you are in for a treat.

(But before they leave, you ought to make sure they bring some sauce.)


(Clicking on any photo should open a larger version of it.)
Posted by kcjazzlark
Email ThisBlogThis!Share to TwitterShare to FacebookShare to Pinterest
Labels: Bobby Watson, jazz, kansas city, UMKC, UMKC Concert Jazz Orchestra