Nothing from Kansas City’s jazz days survives in this part of town. Instead, there’s asphalt lots and unkempt fields. A federal office building is across the street, police headquarters sits next door. Interstate highways criss-cross a few blocks away. But this plot of ground is part of jazz history: 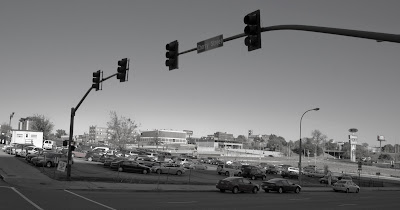 Today, it’s the police station’s parking lot. But three quarters of a century ago, 602 E. 12th Street looked like this: 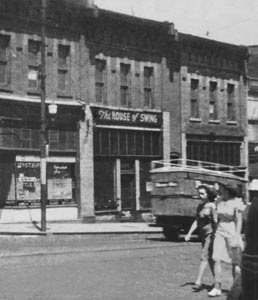 That’s the Reno Club, where in 1935 Count Basie formed what would become the Count Basie Orchestra, and where in 1936 experimental radio broadcasts introduced Kansas City jazz to the world.

“...As long as I had been around Kansas City, I actually didn't know anything about [downtown]. I had spent most of my time either on Eighteenth Street or Twelfth Street or down throughout in there.... Downtown Kansas City didn't mean anything to me. All of the real action was right where I already was.

“...Then I got my chance to go into the Reno Club all the way...at Twelfth and Cherry.... Somebody else was playing there, and he wanted to go somewhere for a few days...and asked me if I'd like to fill in for him.... I needed the job, and by that time I was curious about what it would be like to work in that part of town for a change....

“The manager of the Reno was a short little fellow named Sol Steibold, and we got along fine from the very beginning.... After I had been substituting in there for about a week, Sol...asked me if I would like to have the job on a permanent basis.... When I asked him about [the other pianist], he just shrugged his shoulders [and said,] ‘It’s your job if you want it.’

“...I started bringing in some of my old bandmates.... Since it was my band, naturally I wanted some guys down there that I was already used to playing with and who I also thought were the greatest....

“The Reno was not one of those big fancy places where you go in and go downstairs and all that. It was like a club off the street. But once you got inside, it was a cabaret, with a little bandstand and a little space for a floor show, and with a bar up front, and there was also a little balcony in there. There were also girls available as dancing partners. It was a good place to work. I liked the atmosphere down there. There was always a lot of action because there were at least four other cabarets right there on that same block, and they all had live music and stayed open late.”

“…I’ll never forget that first night I went to the [Reno]. Basie had a show at eight o'clock...eight p.m. to four a.m. They did three shows a night. There were about four chorus girls, and there was a whorehouse upstairs, and Basie got eighteen dollars a week and the other guys got fifteen dollars a week….”

“[The Reno] was nothin’ but a hole in the wall. Just mediocre people mostly went in there, a lot of the prostitutes and hustlers and thugs hung out down there. And the house was packed. They had a show down there we had to play. Dancers and comedians and things like that.”

“[At] the Reno, beer was a nickel, scotch was fifteen cents, and the other whiskey in there was a dime. That's all it was.... And it was great, you know, it was really nice. You didn't have to wear any [uniforms]. You just put on a shirt, whatever you wanted to do. But it was hot as hell.

“If you wanted to get up for something, you just get up and walk out in the back and the band would keep on playing.”

“I got Sol Steibold to put an elevated band shell in the Reno.... That showed the band off very nicely, but it got pretty crowded up there, too, because they also brought in a baby grand in there. And we also forgot that the tuba player couldn't quite fit in there, either. So old Big ‘Un [Walter Page] used to have to go outside and reach in through the window. He'd leave the horn inside, but he was outside, sitting on a stool or something if he wanted. But he didn't mind that at all, because he had his little action going on out there. He could take his little nips. He had a ball out there. But, of course, when we used the bass fiddle, he was inside, right next to the piano.”

Like most KC clubs of the time, the Reno was segregated. The main floor was for white customers. The balcony and a small space behind the band were for black customers.

Trumpeter Richard Smith in a 1973 story in The Kansas City Star's Sunday magazine:

“Standing room at the back alley was a bleacher of sorts, for the overflow of patrons on heavy nights, and for musicians, black and white, who wanted to listen ‘closer’ to the band.

“The repartee between those on both sides of that back door was often more entertaining than the floor show on the inside. Drinks purchased by the bandsmen could be shuttled through the door at half price. Some outside purchases would sometimes meet with disaster on the return trip by falling into the hands of Big ‘Un who would down it with one gulp, throw the glass out the door and tell the luckless buyer to ‘Go to hell.’

“With [a] lunch wagon parked at the alley’s Cherry Street entrance, there sometimes was more business transacted through the back end of the Reno Club than through the front door.”

“...There was a window in the back of the bandstand...and people used to just shovel up pot through the back window and it didn't seem to affect the guys at all.

“It was still the best band I ever heard.”

The Reno Club closed in 1939 when reformers “cleaned up” Kansas City. It was progress, I mused, while looking at a cracked asphalt lot and unkempt fields.

Quotes by Basie are from his autobiography, Good Morning Blues. Unless otherwise noted, other quotes are from Goin’ to Kansas City, a history of KC jazz.
Posted by kcjazzlark
Email ThisBlogThis!Share to TwitterShare to FacebookShare to Pinterest
Labels: Count Basie, jazz, kansas city, Reno Club