Turkish jazz in the stockyards? I dare you to find that outside of Kansas City.

You could certainly find it here earlier this month when Alaturka, a quartet blending Turkish music with jazz, played R Bar in the city’s West Bottoms, less than a block from where cattle once roamed.

There’s much to explain in that sentence.

For a year I declined to head out to Alaturka’s monthly Sunday night shows at Jardine’s. Turkish music and jazz? What could be more odd a combination than that? Surely I wouldn’t like it.

I could not have been more wrong.

I finally attended an Alaturka performance a few months back. The room was packed, and I grabbed a seat up front.

Seeing Sait Arat’s hands glazing the darbuka faster than the eye can focus – you’ll see what I mean in a photo below – while hearing musical perfection was a revelation. Previously, I’d only heard Rich Wheeler on short sax solos in a contemporary big band. But here, extended tenor of magnificent tone and soulful feel filled the room, intimately. This night, Beau Bledsoe’s guitar and oud and Bill McKemy, sitting in on bass, took occasional expert solos but mostly underlaid solid support.

The experience was extraordinary.

On their recently released CD, Tamam Abi, regular Jeff Harshbarger commands the bass seat. Here, without seeing Sait play, Beau’s oud and guitar assume a more prominent role. It’s still a jazz – no, really, a music – experience like none other you’ll find (the CD is available for sale here, or for download on iTunes here).

Now let’s mention R Bar, a still new restaurant and bar in Kansas City’s West Bottoms area. Thirty years ago, the stockyards dominated this area; where cattle pens once stood is seen right though their front door. But today, in R Bar (web site here), a wonderful atmosphere mixes excellent food and drink with jazz and other styles of acoustic music.

On November 4th, Alaturka, with Sait Arat on darbuka, Rich Wheeler on tenor sax, Beau Bledsoe on oud and guitar, and Jeff Harshbarger on bass, took the R Bar stage for a marvelous night of music. Which is how we get to Turkish jazz in the stockyards. How did it look? That answer is in the photos below. As always, clicking on one should open a larger version of it. 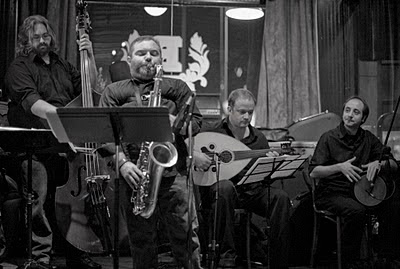 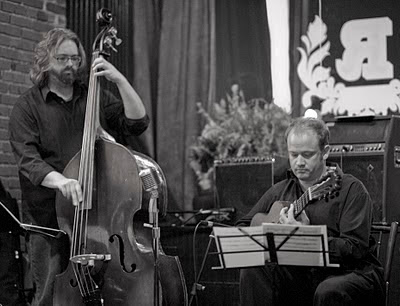 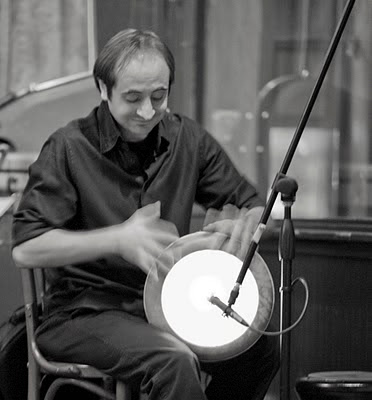 Sait Arat. This photo was shot at a speed of 1/15th second. This, amazingly, is how his hands move in one-fifteenth of a second, while playing every note perfectly. 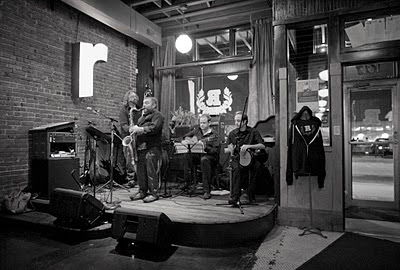 Alaturka in R Bar. The lights you see through the front door today are in a parking garage. Thirty years ago, cattle pens stood there as part of the Kansas City stockyards. 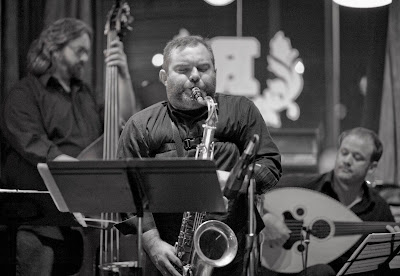 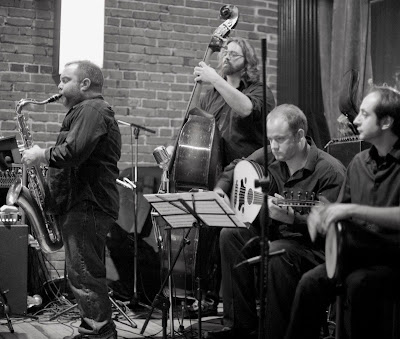 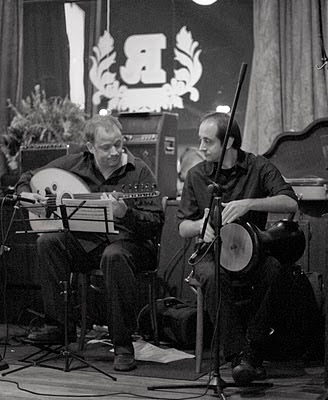 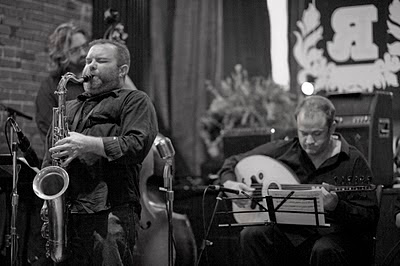 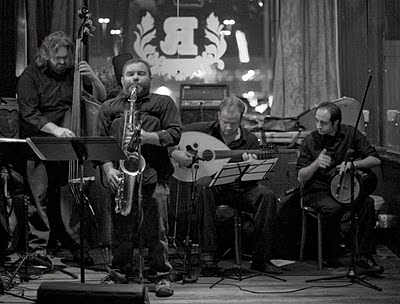