I first met Millie Edwards some fifteen years ago, when her husband and I worked at the same ad agency. He was an art director and I was the production manager. Then she was working days and singing nights, often with Everett DeVan. Today she’s best known as a Wild Woman, singing with Myra Taylor, Geneva Price and Lori Tucker as one of the Wild Women of KC, a jazz favorite (photographed here). 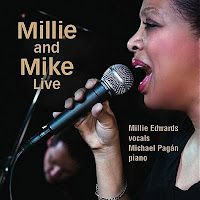 But each Monday you’ll find her at The Phoenix (one of that bar’s last links to its jazz heritage). And on the new CD, Mike and Mille Live, you’ll find her with pianist Michael Pagán in vocal and piano duets recorded live at Jardine’s.

From the perfectly hit soaring notes on In a Mellow Tone and Just In Time to the tenderness of The Very Thought of You and Someone to Watch Over Me, Millie’s voice caries each song with power and emotion, vicarious hurt or fervent joy.

Michael Pagán’s piano is more than a complement to the singing. It sets its own voice, imaginatively playing out its own twists and takes on traditional numbers, weaving in and out and around Millie’s contribution. It is supportive of the singing without just establishing a base for the voice, but imbuing each piano and voice duet with its own, always swinging, often complex, vigor and interest.

I don’t usually care for piano and singer duets. Too often, they strike me as too simple, lacking depth. But not this one. When Millie cries out, “There’s a joy unknown/When you do it in a mellow tone,” my reaction is: Amen!

Millie and Mike Live is available on iTunes, here, at Amazon, here, and at CDBaby, here. And I’m betting you can find it Monday nights at The Phoenix.

His EVI can swing and soar and soothe.

It’s been 24 years since I first met Mike Metheny. He was living in Boston when we brought him in as one of the two headliners of the 1987 Kansas City Jazz Festival in Volker Park. Wynton Marsalis was the other. Mike’s performance was better received. Wynton’s trumpet bordered on clinical while Mike’s trumpet, flugelhorn and EVI (Electronic Valve Instrument) were more accessible, more personal and more vibrantly engaged the audience. 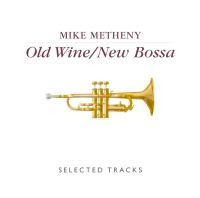 You hear those qualities in Mike’s latest CD, Old Wine/New Bossa, a compilation of what he considers his best recorded work from nine previous CDs.

Yes, I’ve Met Miss Jones, backed by Kansas City’s PBT Trio (Paul Smith, piano, Bob Bowman, bass and Todd Strait, drums) opens the CD with swing as Kansas City knows it. Mike’s simultaneously sublime and beautiful flugelhorn on How Insensitive (complemented by Rod Fleeman’s guitar solo), delivers a fresh tenderness to a song I discovered when Karrin Allyson sang it in KC clubs. That same flugelhorn followed by EVI pull me into the soothing yet intriguing world of the CD’s title track, Old Wine/New Bossa. And on Benny Golson’s Are You Real? with Roger Wilder's piano solo followed by Mike's coronet followed by Danny Embrey’s guitar solo, you have a snapshot of some of Kansas City’s best jazz musicians at their best.

The more complex paths of Three for Boston, the haunting uneasiness of Farmer’s Trust, the tranquil and dreamlike Deceptive Resolution, and the placid joy of Ta-Ta For Now (with little brother Pat) cement this collection.

You can hear Mike at the Prairie Village Jazz Festival on September 10th. Until then, you can find Old Wine/New Bossa on Mike’s website, here.

Her voice will break a heart.

I met Karrin Allyson over fifteen years ago when every Tuesday night she and Rod Fleeman played The Phoenix (back when The Phoenix was a legitimate jazz destination, when the neon “Live Jazz” sign in the window wasn’t, on most nights, false advertising). Nearly every week, I was there. Karrin played piano and sang while Rod accompanied on guitar. It was obvious then that Karrin’s voice was extraordinary. 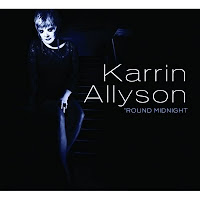 Her voice is still extraordinary. And on her new CD of ballads, ’Round Midnight, she plays piano, something we’ve heard only occasionally on her recordings in recent years. Add Rod Fleeman on guitar on all but three of the cuts and Randy Weinstein, who would sometimes sit in on harmonica in Karrin’s KC days, on a couple numbers, and it's just like The Phoenix.

But it’s not like at The Phoenix. Karrin’s voice is even better today, with a virtuosity and depth built from experience. Take Spring Can Really Hang You Up the Most, a song I heard her sing often in her Kansas City days. Here it’s delivered with smoothness punctuated by a mature playfulness. There’s a precision to Sophisticated Lady, an intimacy which, on this CD, makes it Karrin Allyson’s song. You don’t hear that in a noisy bar. And at the end of Goodbye, listen when she sings, “Kiss me when you go, goodbye.” She’s singing that to you, just to you, and she’s breaking your heart.