The Boone Theater...and New Rialto and Scotts and the Armory Building

Today the press is referring to it as the Boone Theater. But that was its second name. It opened in 1924 as the New Rialto. When I was in there, in the 1980s, we called it the Armory Building, for its last use before the Mutual Musicians Foundation bought it from the city for a buck.

The building at 1701 E. 18th Street, the southeast corner of 18th and Highland in Kansas City's historic jazz district, was in the news a couple weeks back. It won a National Endowment of the Arts award of $200,000 to “support the predevelopment, design and community planning phases” of restoring it as the home for Folk Alliance International. Restoration will require raising $2.5 million (the press release is here).

It’s not the first time the National Endowment for the Arts has given money to bring the Boone back to life. NEA Project Number R80-42-76 in 1979 paid for a study which concluded the building could become the KC Jazz Center for, back then, $583,128.00. Money which nobody ever raised. So good luck with that two-and-a-half million.

But let’s start further back than 1979. Let’s start in 1924, when the building opened as the New Rialto. In 1929 it was renamed the New Boone Theater for John W. “Blind” Boone, a then-famous black child pianist and composer, a prodigy from Missouri who died in 1927. In 1949 it was remodeled and became Scotts Theater Restaurant and Show Bar. Scotts was home to movies, music, drink and food, and a theater where the Orpheum Circuit booked touring acts.

Sometime in the 1950s Scotts closed and the building was acquired by the State of Missouri and converted to a National Guard Armory. It was home to the 242nd Engineering Battalion, an all-black unit. The 242nd disbanded in 1960, when the segregation ended in Missouri’s National Guard. A few years later the city bought the building from the state for a dollar and used it as storage for the Public Works Department. In 1977, the city sold the by then deteriorated building to the Mutual Musicians Foundation (MMF), recouping their dollar. The Foundation worked with the Black Economic Union (BEU) on a plan to rehab the structure as a Jazz and Cultural Center.

The April, 1979, NEA-funded study, titled The Tradition Jams On, was the result (the facts above are from that study). It reads:

“The idea of a Jazz Center in the Armory Building in the 18th and Vine area has been a dream and an important part of the overall development plan for many years. There has always been the hope that we could provide space to present jazz music, community classes, drama performances and an artists’ gallery. To provide a theater which truly serves the community, we will need to find income generators which will offset the high operating costs of such a project. Though we plan to find grant funds or private donations to renovate the building, we hope to be independent of public funds for day-to-day operations.

“To accomplish this, MMF and BEU realize the necessity of having both a music hall as well as producing concurrent revenue producing activities. It is hoped that eventually the music-related activities will expand from the Armory Building to other buildings along 18th Street or south on Highland Avenue. In the overall plan, a Highland Avenue Historical and Cultural District has been advocated. This area would encompass both cultural and residential activities. The street would be vacated at the south intersection at 19th Street and a cul-de-sac and small urban park would be created. The Rochester Hotel would be rehabilitated and reused as residences for those involved in the jazz-related activities. Possibly the profit created could be reinvested back into the jazz project. The keystone of the entire project will be the renovation of the Armory Building at 18th and Highland.”

The plan foresaw a music hall, a Kansas City Jazz Hall of Fame and Gallery in the lobby, and a music store on the first floor. The second and third floors would hold a rehearsal space, offices for MMF, and a jazz radio station. A three page budget detailed how all this could be done.

I was in the Armory Building in the 1980s, while helping set up an 18th and Vine Festival, carrying tables and chairs stored there to the festival grounds. I don’t know when the Mutual Musicians Foundation gave up on the Armory, but I’m told it no longer owns the building.

Now the Folk Alliance International wants to move from Memphis into the New Rialto/Boone Theater/Scotts Theater/Armory Building. Thirty two years ago its renovation was envisioned as the catalyst for revitalizing Highland Avenue. Heck, the city is still trying to turn the Rochester Hotel on Highland into residential units. And today, renovating the New Rialto/Boone Theater/Scotts Theater/Armory Building is only going to cost about two million dollars more than it would have cost in 1979.

Good luck with that. 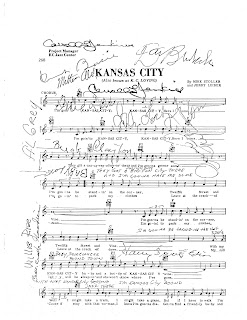 One of the most interesting parts of the 1979 study is the sheet music reproduced on the last page. I’ve scanned it. How many of these signatures can you identify? And I didn't realize the song Kansas City had a second verse.