They Changed the Mutual Musicians Foundation

When you stepped into the Mutual Musicians Foundation, history embraced you.

You first see, looming over the lobby, larger than you ever imagined it really was, the 1930 portrait of members of Musicians Local 627 lined up before this building. There’s Bennie Moten. There’s Bill Basie. There’s little Jimmy Rushing. This is our version of the more widely known A Great Day in Harlem. But ours came first.

You stepped into the first floor’s main room, and you were engulfed by photos, clustering all walls, of the musicians who made this building unique. You saw their faces and felt decades of their presence. You understood that you were standing, exactly, where Count Basie stood, where Lester Young played, where Mary Lou Williams socialized, where Ben Webster enjoyed a drink. You’d be surprised if the ghost of Bennie Moten tapped your shoulder here, but it wouldn’t be unexpected.

You understood you were welcome in the space some of history’s greatest jazz musicians created. It was a feeling unlike any other, at least in Kansas City.  You knew otherwise, yet every sense suggested you had stepped out of the 21st century.

The lobby photo remains. But the photos filling the downstairs walls are gone. They have been moved upstairs, where they’ve lost the cluster, accessibility and overwhelming intimacy they enjoyed for decades downstairs.

They have been replaced by interpretive panels. 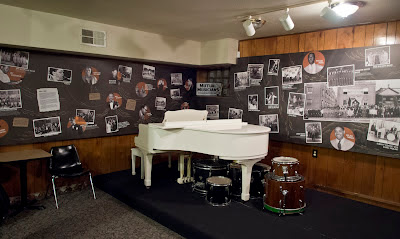 Each of the three new panels reproduces select photos from the Foundation’s collection, with more significant musicians pictured individually. A few paragraphs of well-written history expand on the time period the panel covers. Photos and copy connect through swirls of names.


The MMF is facing new times, new directions and was questioning whether the status quo was serving us. We came to the conclusion that it was not. We then consulted on several levels (both local and national) as to what would tell the story of the MMF through the eyes of the community from which it organically grew.

Local 627 was not just the place to play. It was a gathering place for children studying music, church groups with their box lunches and socials and many other things that Basie, Mary Lou and those we revere and love had much to do with. We wanted the story of the MMF to come through and the panels represent the entire picture of what happened.

Anita is a dear friend who I respect tremendously. And I understand when she further explains that the Board wanted panels to relate the history to the visitors who still crowd the Foundation for Friday and Saturday night jam sessions. And they did not just want to tell the history, but to portray it in the context of the African American community where the Foundation grew.

But these interpretive panels are the wrong solution. 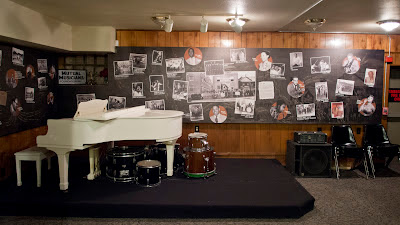 They change the basic character of the Foundation. You’re no longer stepping into a cacophony of photos. You no longer feel like you’re experiencing a space as Prez and Ben and Mary Lou knew it. The feeling, the magic, of stepping out of the 21st century is gone. Now, you’re standing among three big, modern interpretive panels.

They were not necessary to achieve the Board’s goals. Just three of the photos which were already hanging, one per wall, could have been moved to accommodate the new historic copy. Tags identifying faces in the photos would have always been welcome. Those simple updates would have conveyed as much information as the interpretive panels reveal, but in a way that would have made you look for it a little bit, a way where it would have stuck with you more. 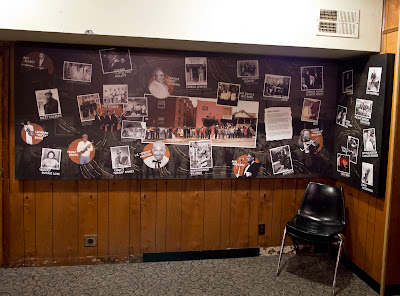 More than that, just walk outside. Look at the houses and hotel surrounding the Foundation. They’re being rebuilt. As soon as the construction is complete, stepping into the neighborhood will provide context to the kind of life which surrounded this landmark. Details and elaboration on the Foundation’s walls, done right, are fine. Experiencing the restored neighborhood will be better.

Part of the Foundation’s magic is that it is not a museum (“We are still not a museum,” Anita declares). It is living, thriving history. If interpretive panels providing historic context for 18th and Vine are needed, someone should be taking that up with the museum down the block and around the corner. 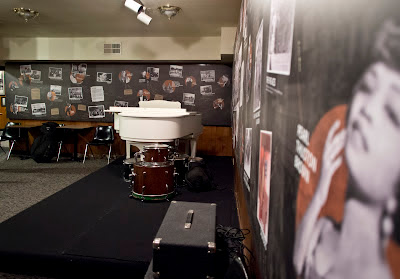 The Foundation’s new panels have been up for several weeks. But they will be officially unveiled at a ceremony this Friday, August 24th, at 2 p.m. at the Mutual Musicians Foundation at 1823 Highland.