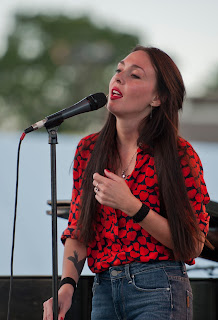 That brings you current. Now, start four months back.

She looked anguished as we talked, standing outside The Blue Room. Suddenly, her legs buckled and she nearly fell, grabbing the arm of the musician next to her. She scurried to a nearby car for medication. The pain caused all that, she told me later.

This summer, doctors found acute infection on Megan Birdsall’s prosthetic jaw. Surgery was required to take out four plates implanted with the jaw but no longer necessary.

On August 7th, in Dallas, the plates were successfully removed.

Doctors then advised surgery to replace the entire prosthetic jaw, as soon as possible.

I wrote about Megan a year ago (here), this sprite with a spectacular voice. I first heard her with a big band. On stage, I saw a smile that seemed to fill half her face. Then, amazingly, I heard a singer equal to any in jazz. With her uptempo version of Miss Otis Regrets, the packed club exploded in applause.

Afterwards, I discovered her story. Cartilage in Megan’s jaw had deteriorated and a shifting facial structure was crushing her windpipe. An operation replaced her jaw with a prosthetic jaw to save her life. At the time, doctors didn’t know whether she would be able to sing again. Recovery took a year.

She had suffered constant pain during the two years since. Doctors found she was allergic to five of the eight metals in the prosthetic. They attempted having her inject the metals into her stomach to reverse her body’s rejection. That failed. Tumors grew under one cheek.

Then, last Fall, an auto accident – the other driver ran a stop sign and broadsided her car – left her with two bulging discs, a physical therapy regimen, and more pain.

Medications help to control the pain. But nothing helps more than singing.

Last July at Take Five, Megan closed the night with her yearning yet rousing interpretation of Wichita Lineman. The house was filled. Everyone stood to applauded.

If you don’t know her story, you’d never guess. She doesn’t want the audience to know. Occasionally you might catch her wince, but you don’t realize why. And you don’t know why she might sit on a stool rather than stand. On stage, she catches you with that vivacious smile, and her voice. She owns every song. She owns the room.

They want to replace Megan's prosthetic jaw with one built almost entirely of titanium. With this newer, more advanced prosthetic, doctors could work to desensitize her body to just one metal rather than five.

She endured this surgery, this replacing her jaw, before.

There was one other possibility. New blood tests were taken, using a different method. These tests could return new results. They could show reduced, or no, allergies. Then, a less radical operation might clear the pain.

Otherwise, she faces a process which starts with desensitizing, injecting concentrated doses of titanium into her stomach every day. Side effects impact the body and mind. Histamine and serotonin normally control the side effects, but Megan is allergic to those, too.

And there’s no guarantee it will work.

But assume it does. Next, her face is cut open to remove the existing prosthetic jaw and replace it with the newer all-titanium prosthetic. The  cost is more than $100,000. This prosthetic is so new it has not yet completed the FDA approval process. So insurance does not cover it.

Afterward, she may not be able to sing for a year.

Two weeks into her recovery from removal of the infected plates, results of the blood tests were delivered.

Megan is allergic to five of the eight metals in her prosthetic, including titanium.

Keeping the current prosthetic means risk and continued pain, maybe more incidents like the one outside The Blue Room.

Replacing the prosthetic starts with a trip to Dallas to prepare for daily desensitization injections which may or may not succeed. Then surgery to replace her jaw.

I booked talent for this year’s Prairie Village Jazz Festival, and I did it with a couple of conditions. One was that Megan perform in the event, so everyone could have the chance to hear.

Before the surgery, Megan emailed me. She promised she would make the festival date. But she might need extra makeup to cover bruising from the operation.

This performance was critical to her, and to her recovery. Megan’s group was scheduled just ahead of the headliners. Thousands would fill the festival grounds. A month after one surgery, preparing to raise funds for another, debilitating operation, she needed to prove to herself she could do this, that she could take a major stage and perform the music so important to her, before thousands of people.

And it was important that, outside of family and some friends, the crowd not know about the pain. If she succeeded this night, she would succeed not from sympathy, but because of the music.

A side effect of her surgery was vertigo. She needed to grab someone’s arm to walk the festival grounds, so she wouldn’t fall. Always thin, this day she looked especially frail.

At 7 p.m., a musician wrapped his arm around hers and walked Megan onto the stage. She sat on a stool, surrounded by her pianist, bassist and drummer.

And she sang, to thousands of people, for an hour.