This tour starts at Nineteenth and Vine.

This is the Roberts Building, at the northwest corner, in 1929. The white building at the right of the photo, on Vine Street, was the first auto dealership in America owned by a black man. A December 23, 1929 article in one of this city’s black newspapers (in 1929, Kansas City was home to the Call and the American) reported:

“That a negro business man has bought outright a substantial building on a 70-foot frontage at 1826-30 Vine street for a location for his company was considered an event of major importance in the business district in that vicinity and along nearby Eighteenth street. Homer Roberts of the Roberts Company, a motor car agency selling only to negroes, has done this. He bought last week a 2-story building from John T. Sears for $70,0000.

“The structure was erected last spring for occupancy of the Roberts Company. A 10-year lease written then included a purchase option, which was exercised last week. The lease called for an annual net rental of $3600.

“The Roberts Company handles about ten lines of cars, this being permitted by manufacturers because the selling field is limited to negroes. Fifty-four workers, all negroes, are employed by the company….

“The purchase of the business property is to have a holiday aspect. The deed will be given the buyer on Christmas eve.”

Ads promoted an Oldsmobile Six Coach for $1075 (“With its Fisher body, Dueo finish and Balloon tires it looks the part of a winner”), or a Rickenbacker for $1595 (“Speed! The fastest train between New York and St. Louis takes twenty three hours eleven minutes. Cannon Ball Baker drove a Six cylinder Rickenbacker in seventeen hours, thirteen minutes”).

Homer Roberts died in Chicago in 1952.

Next to the onetime auto dealership, at 1822-24 Vine, stands the facade of the second most historic jazz structure in Kansas City, the Eblon Theater, later the Cherry Blossom nightclub. I wrote about it here.

The night Kansas City saxophonists took down Coleman Hawkins in an infamous jam session at the Cherry Blossom began when Hawkins walked across the street for his horn, to the hotel where he and Fletcher Henderson’s visiting orchestra were staying, and where visiting bands commonly stayed, the Booker T. 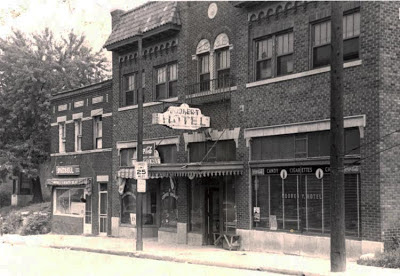 This is the site of the Booker T today, a parking lot. The building at the left of the 1936 photo still stands.

Cross back to the west side of Vine. Two houses stood next to the Eblon / Cherry Blossom. From 1940, here is the house at 1818 Vine. 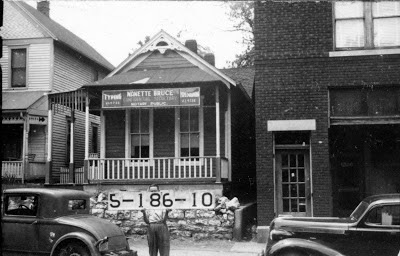 Today, an empty lot sits next to the Cherry Blossom facade. The building at 1816 Vine still stands. The DeLuxe sign on it is a remnant of when this block served as a backdrop for Robert Altman’s film, Kansas City. 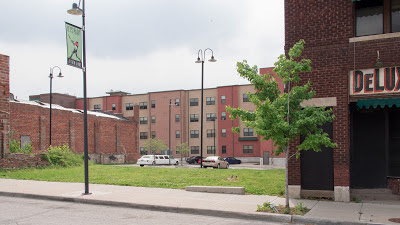 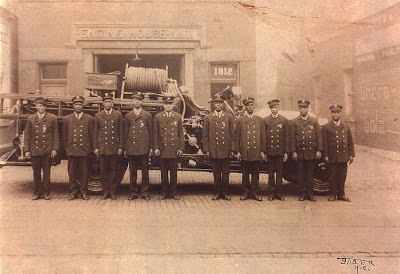 Today, the site is a gravel lot. 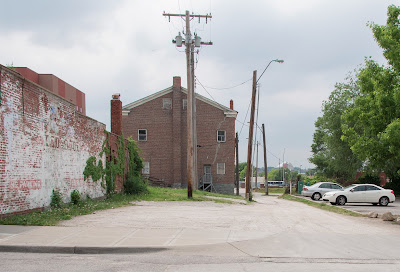 At the northwest corner of Eighteenth and Vine stood Fox’s Tavern, in this undated photo. 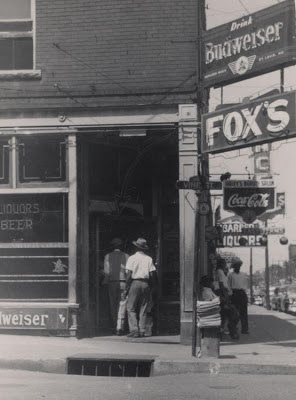 Today you’ll find a parking lot there. And a sign welcoming you to the 18th and Vine Historic District. 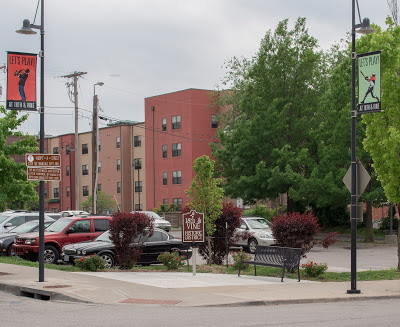