This 'n That 'n History

Saxophonist Ben Webster was born in Kansas City in 1909. He performed here with Bennie Moten’s and Andy Kirk’s orchestras and recorded with both. But he first gained international recognition after moving East, as lead tenor in what was arguably Duke Ellington’s greatest orchestra in the early 1940s.

At least one member of that early ’40s Ellington band is still alive. And living in Wichita, Kansas.

Perhaps this is common knowledge, but I didn’t know. Herb Jeffries, singer with the Duke Ellington Orchestra from 1940 through 1942, and the voice on Billy Strayhorn’s composition, Flamingo, an Ellington hit which sold over 50 million copies, resides today in Wichita. This year, Jeffries turns 100 years old.

I discovered this fact on a radio report from the BBC, which sought Jeffries out to discuss his subsequent roles as a singing cowboy in black Western films. You can hear the story on the podcast of the program, From Our Own Correspondent, here. Scroll to 22:55.

(My favorite line from that BBC story: “Today, he’s largely forgotten but he’s not dead. He’s just moved to Kansas.”)

Jazz grew in Kansas City in the late 1920s and early 1930s through a culmination of circumstances.

TOBA (Theater Owners Booking Association), the Black vaudeville circuit, started in the East and traveled as far West as Kansas City where it reorganized before heading back. Sometimes, performers found themselves stranded here in that reorganization. For instance, a piano player named Bill Basie.

The best known reason for jazz’s development here is that this wide open, gangster-run city of sin provided more opportunities for musicians to find work during the Great Depression, attracting the best from throughout the Mid- and Southwest.

Another accepted reason was the music program of Major N. Clark Smith at Lincoln High School. Regarded as a stern disciplinarian, Smith’s students graduated from his classes knowing music.

Saxophonist Bill Saunders, in the book Goin’ to Kansas City, recalled: “One day Major Smith told the class that music was melody, harmony and rhythm. Being a kid, I paid no attention. The next week, the first thing he said [was], ‘Saunders, stand up here and tell me what music is…. You don’t know, do you?’ He had a ruler and he said, ‘Put your head on the table. Music is melody’ BOOM! ‘Harmony.’ BOOM! ‘Rhythm.’ BOOM! ‘Now go home and tell your Mammy I hit you.’ But I know what music is.”

Among Smith’s other students was Walter Page, legendary bassist for the orchestra Count Basie brought out of Kansas City. Page remembered in a 1958 interview:

“Major N. Clark Smith was my teacher in high school. He taught almost everybody in Kansas City. He was a chubby little cat, bald, one of the old military men. He wore glasses on his nose and came from Cuba around 1912 or 1914. He knew all the instruments and couldn’t play anything himself, but he could teach…. One day he was looking for a bass player and no one was around, so he looked at me, and said, “Pagey, get the bass.’ I said, ‘But….’ and he repeated, ‘Get the bass.’ That’s when I got started.” 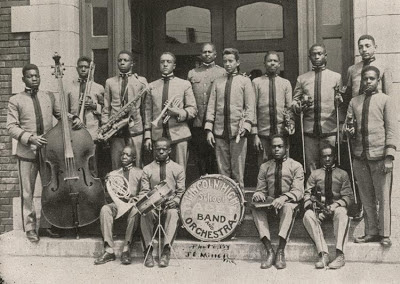 I note all this after stumbling across this photo online. From The Lincolnian, here is the 1917 Lincoln High School Cadet Band and Orchestra. At the left, holding the bass, is 17 year old Walter Page. Standing centered in the back is Major N. Clark Smith.

“Local No. 627 of the American Federation of Musicians has 300 members in this city. Last year there were only 87….

“And why? Simply, it would seem, because under the leadership of its new president, William Shaw, well known here in musical circles, the Musicians Protective Union is doing more than giving itself the name – now it is living up to the name, and its members are profiting thereby as they have never profited in Kansas City….” 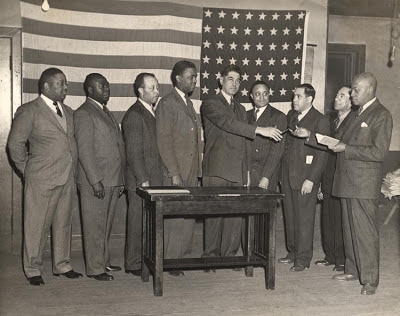 In this photo, from the 1940s, respected longtime Local No. 627 president William Shaw stands behind the table, facing the camera, reaching for the gavel. It was taken on the top floor of the union’s headquarters, in the building known today as the Mutual Musicians Foundation. 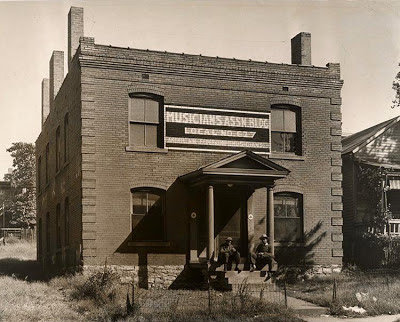 Here’s that building in a photo from the 1930s.

As pictured in the last full post, today this building might host an opera singer or, every weekend, jam sessions which span the night.