In Lieu of 1000 Words: The Project H and Eddie Moore and the Outer Circle

Consider the breadth and variety of jazz in Kansas City today, what you can hear from one night to the next.

Then Saturday night, at the new M Productions event space, two and a half blocks from a ballroom where Moten’s orchestra swung, young jazz musicians performed. They expertly played their own compositions, with contemporary hooks that pull you in. This jazz flowed and jumped along a different path than the music I heard the night before. This is jazz built on eighty years of evolution, brought fresh into the 21st century by musicians the same age the members of Bennie Moten’s band were when they lit up Kansas City.

The Project H and Eddie Moore and the Outer Circle are two jazz ensembles lighting up Kansas City jazz in 2013.

Trombonist Ryan Heinlein composes the music for and leads The Project H. Joined on the front line by Clint Ashlock on trumpet and Brett Jackson on sax, and backed by Jeff Stocks on guitar, Andrew Ouellette on piano, Dominique Sanders on bass and Matt Leifer on drums, this is a collection of some of the best young jazz talent in Kansas City today. This music grabs you. The hook of their closer, Saturday’s Back!, is still repeating itself in my head two weeks later (thanks a lot, guys).

Eddie Moore has brought together Adam Scholzman on guitar, Ben Leifer on bass and Matt Leifer on drums to mostly perform original compositions by himself, Ben and Adam. These songs tell stories, or musically illustrate experiences, all with an intelligence that pulls you in and sets you on a unique path.

A big thank you to M Productions, not just for a special new performance space, but for the opportunity to hear, in one night, so much original music by musicians carrying Kansas City jazz forward early in this century.

Just like Bennie Moten and his musicians did early in the last century.

If you weren’t there on August 24th to hear The Projcet H and Eddie Moore and the Outer Circle, here’s how it looked. As always, clicking on a photo should open a larger version of it. 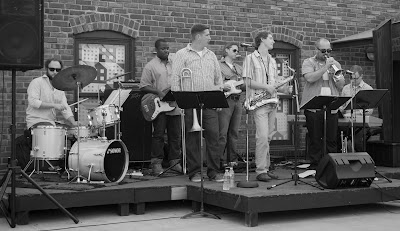 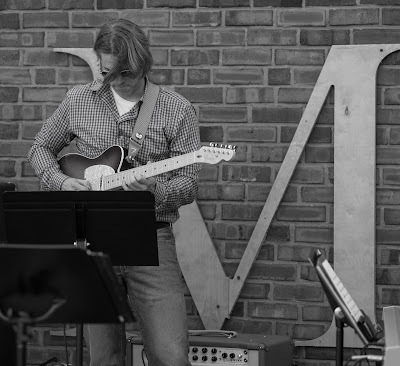 Guitarist Jeff Stocks (in front of a big M) 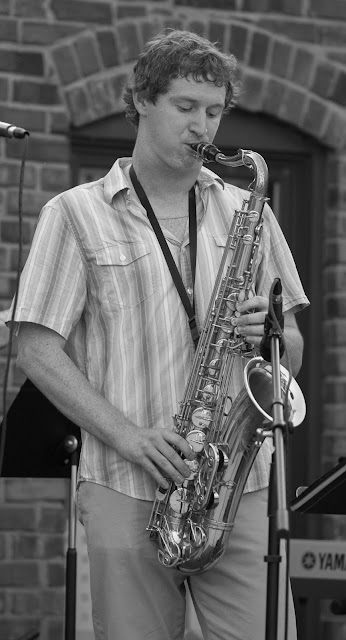 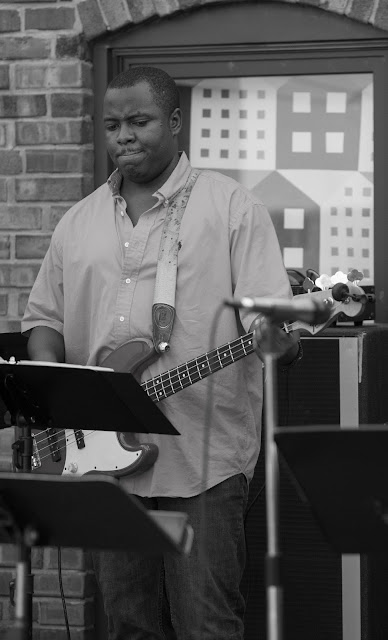 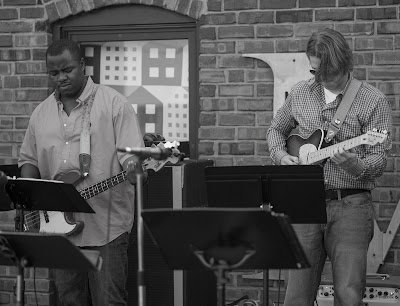 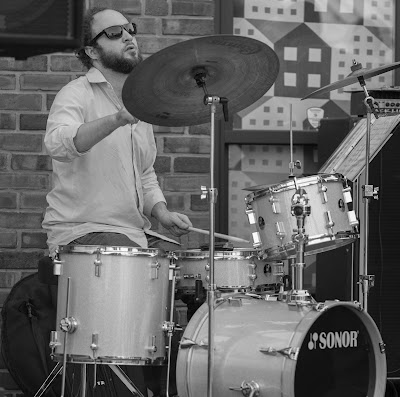 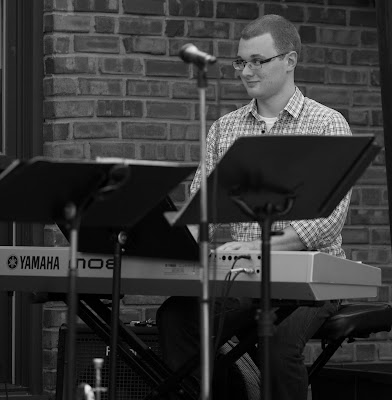 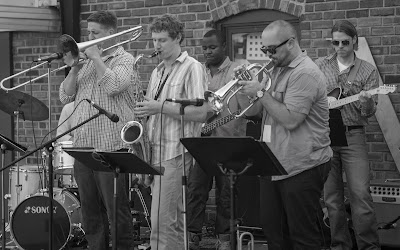 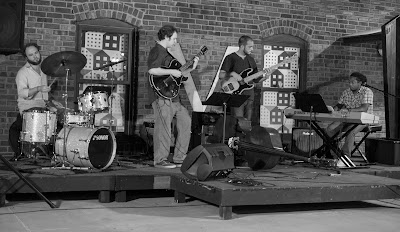 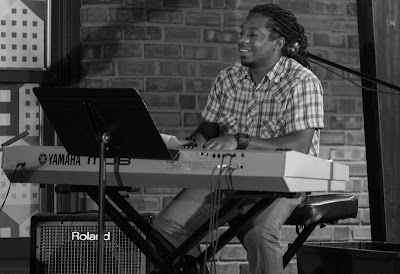 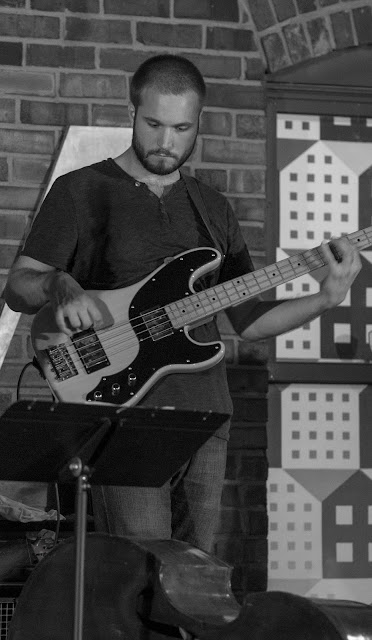 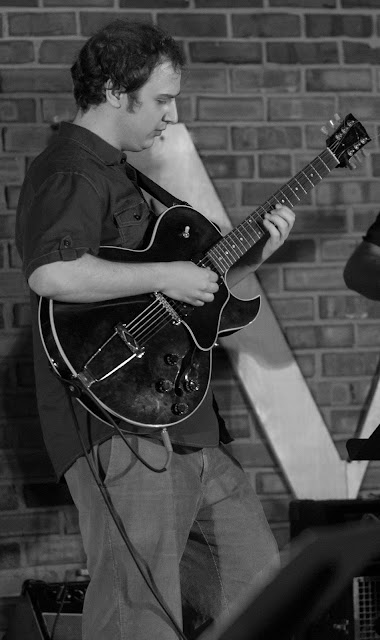 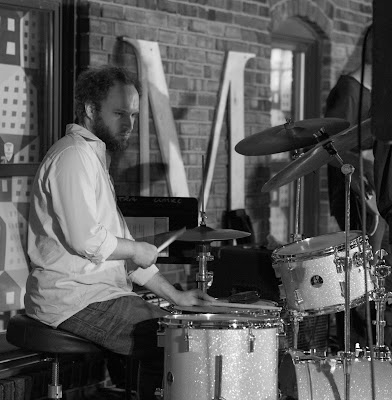 Matt Leifer on drums, this time for the Outer Circle 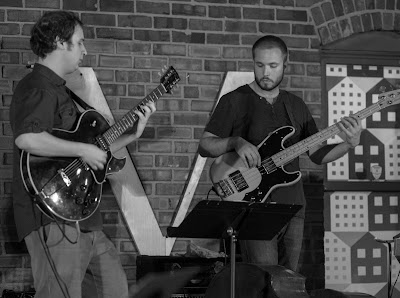 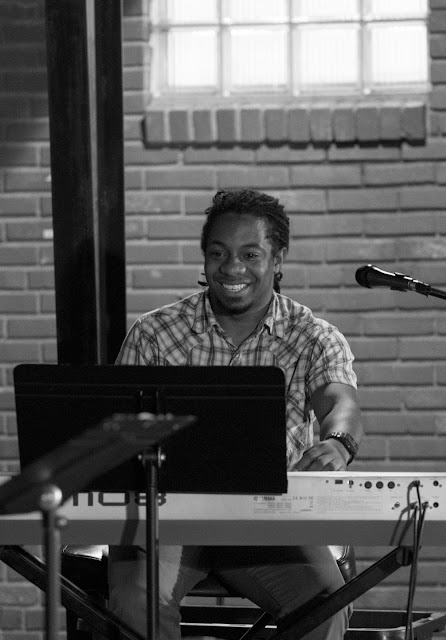