Bird Tour Plus One

I was angry at myself.

I’d known about the tour for weeks. On Saturday, as part of the 17-day Charlie Parker Celebration, a trolley would be driving participants to Kansas City sites associated with Charlie Parker, with Chuck Haddix explaining the significance of each location. I was looking forward to this. I discussed it in last week’s blog post.

So, at noon last Friday I was standing at the desk in the lobby of the American Jazz Museum to buy a ticket. And they were sold out.

Congratulations to the American Jazz Museum and KC Jazz ALIVE, organizers of the tour and the Parker Celebration. Selling out every seat at $15 each is impressive.

But I wanted one of them. I stood at the desk. I asked the host if she was sure they were gone. I frowned. I fidgeted. I whined. None of that opened up a seat.

But in sympathy (or maybe to get rid of me), the host handed me a pair of sheets stapled together. Here was the itinerary, she told me. It listed each stop on the Saturday tour, with its address. I could take that. Maybe I could drive to each location myself.

Now there was an idea.

Between Saturday afternoon and Sunday morning, after the official tour concluded, I visited each site with my camera and photographed it.

So below, for everyone who, like me, missed the bus, are the stops of Saturday’s Charlie Parker Historical Tour, in order, with a photo of each. And I’ve added one site where Bird performed that wasn’t on the tour.

One critical element missing from a stack of photos is Chuck Haddix’s commentary. So with each, I’ve added Chuck’s description of the location, mostly from his terrific biography, Bird: The Life and Music of Charlie Parker. If you haven’t read the book yet, you need to.

And next time I need to buy a ticket sooner. 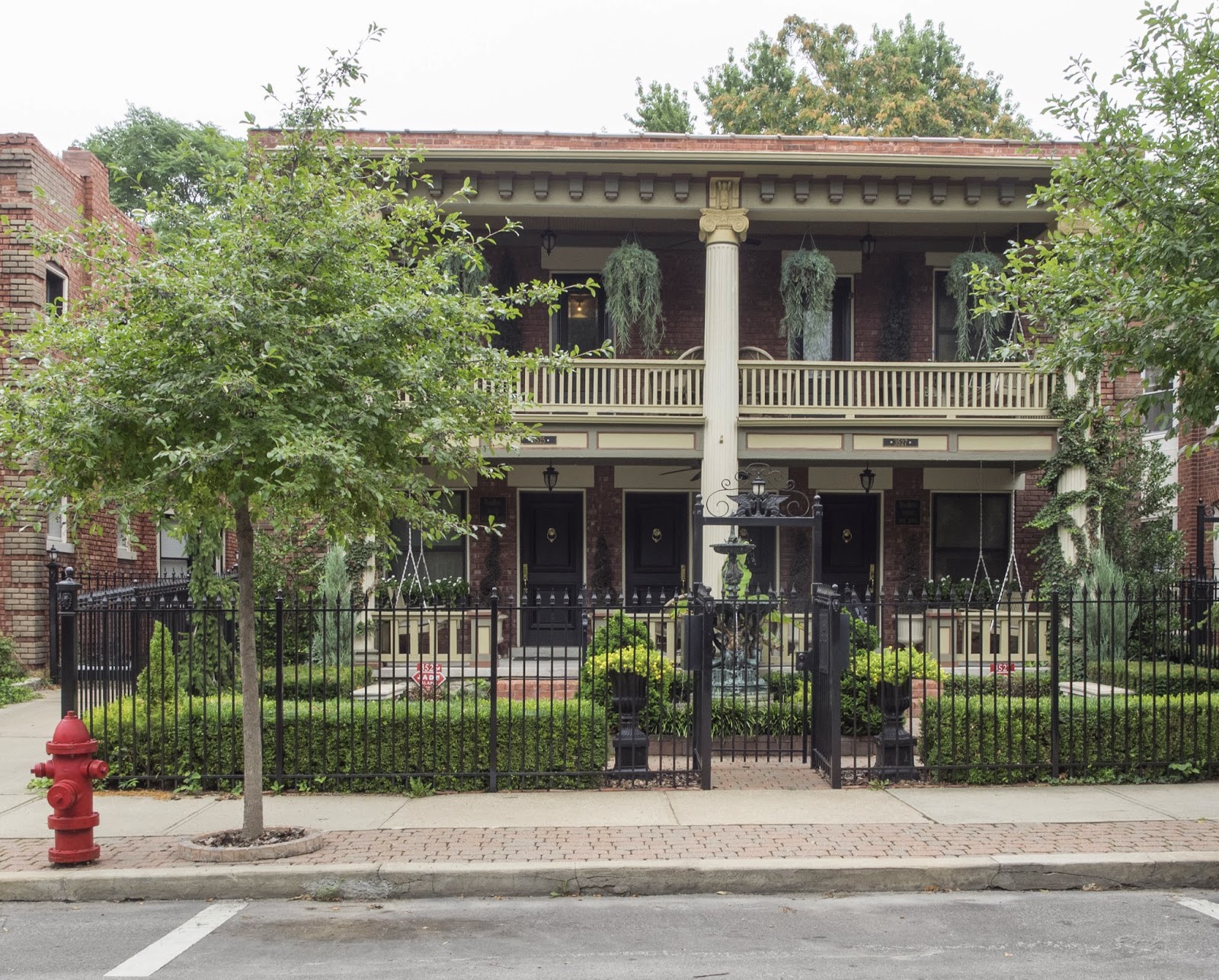 3527 Wyandotte. The Parker apartment was on the upper floor on the right.

“[In the summer of 1927], the family moved into a spacious upstairs apartment in a brick fourplex at 3527 Wyandotte Avenue, just north of the apartment building where Charles Sr. worked. Tall, white, fluted Ionic columns framed the unit’s broad, gray, wood front porches. Charlie played on the sidewalk in front of the apartments beneath elm trees arching over the street. He attended Penn School in Westport, a historic area located a mile south of the family’s apartment….

“Arthur Saunders, a classmate of Charlie’s at Penn School, recalled, ‘There was not much prejudice in Westport. There were three main groups - white, black and mixed. At a club in an area known as The Valley, mixed-race couples gathered to socialize. No one bothered them.’” 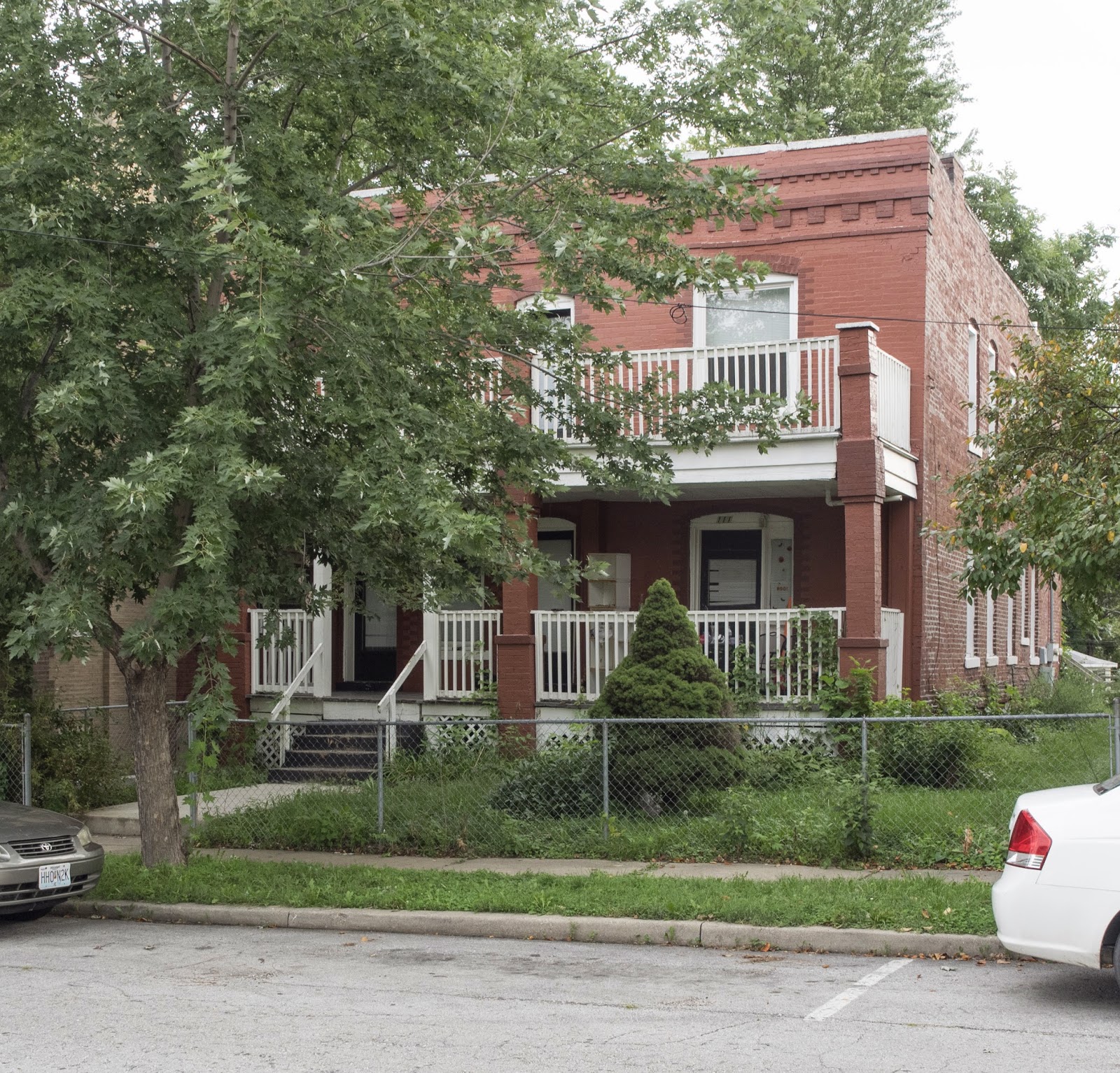 This residence isn’t mentioned in Chuck’s book. But on Steve Kraske’s Up to Date program on KCUR-FM last Friday, Chuck explained: “This is where Charlie Parker and his family lived from 1930 until 1932… When [Chuck and a friend] discovered  this, it was actually empty and in a horrible state of disrepair - it’s owned by a bank - and since then they’ve renovated it. Fortunately, they haven’t overdone it. It’s pretty much what it looked like back in the day….” 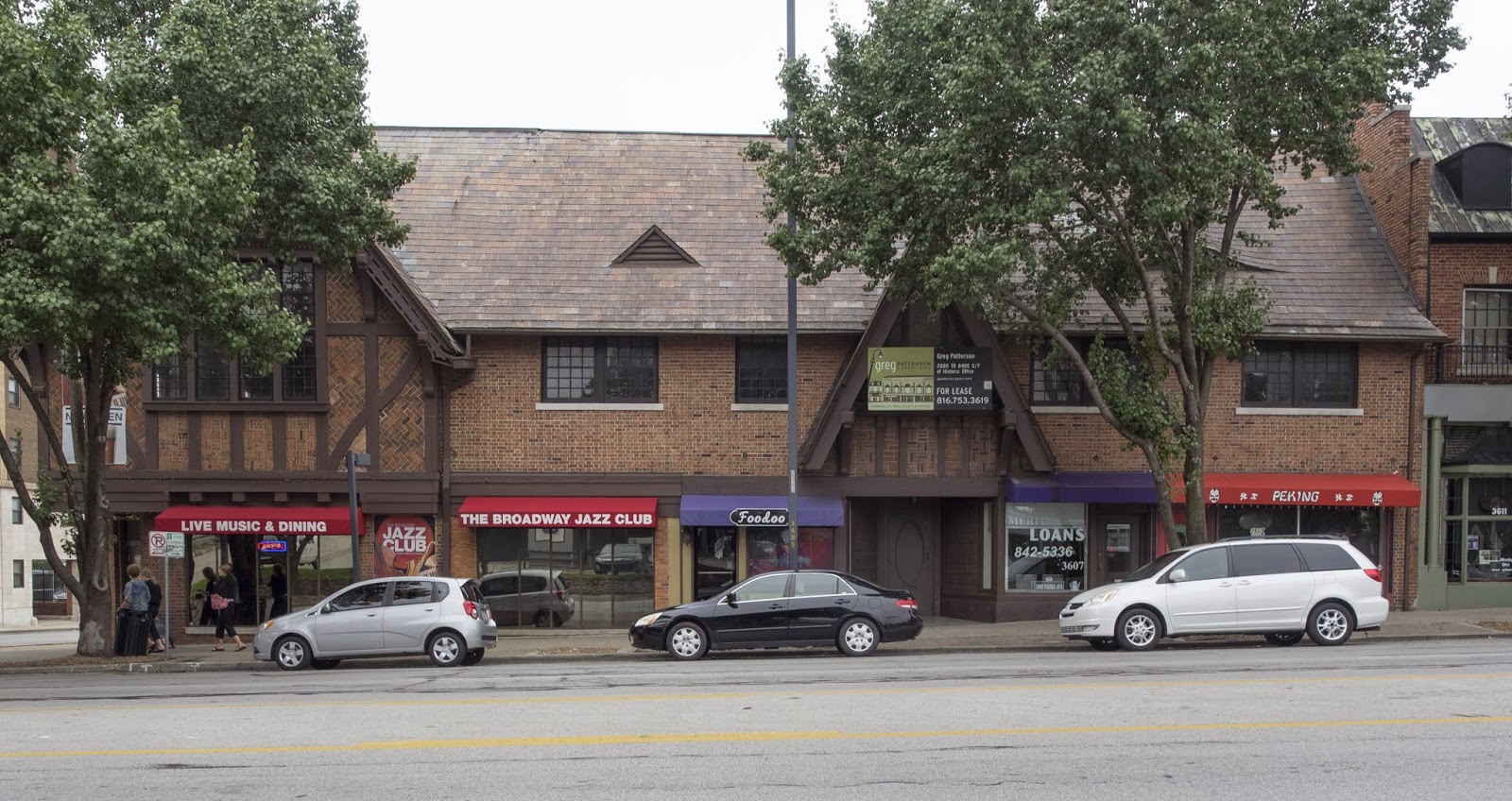 I didn’t find the Century Room mentioned in Chuck’s book, and a cursory Google search unveiled nothing. But it’s a close walk to Charlie’s homes. 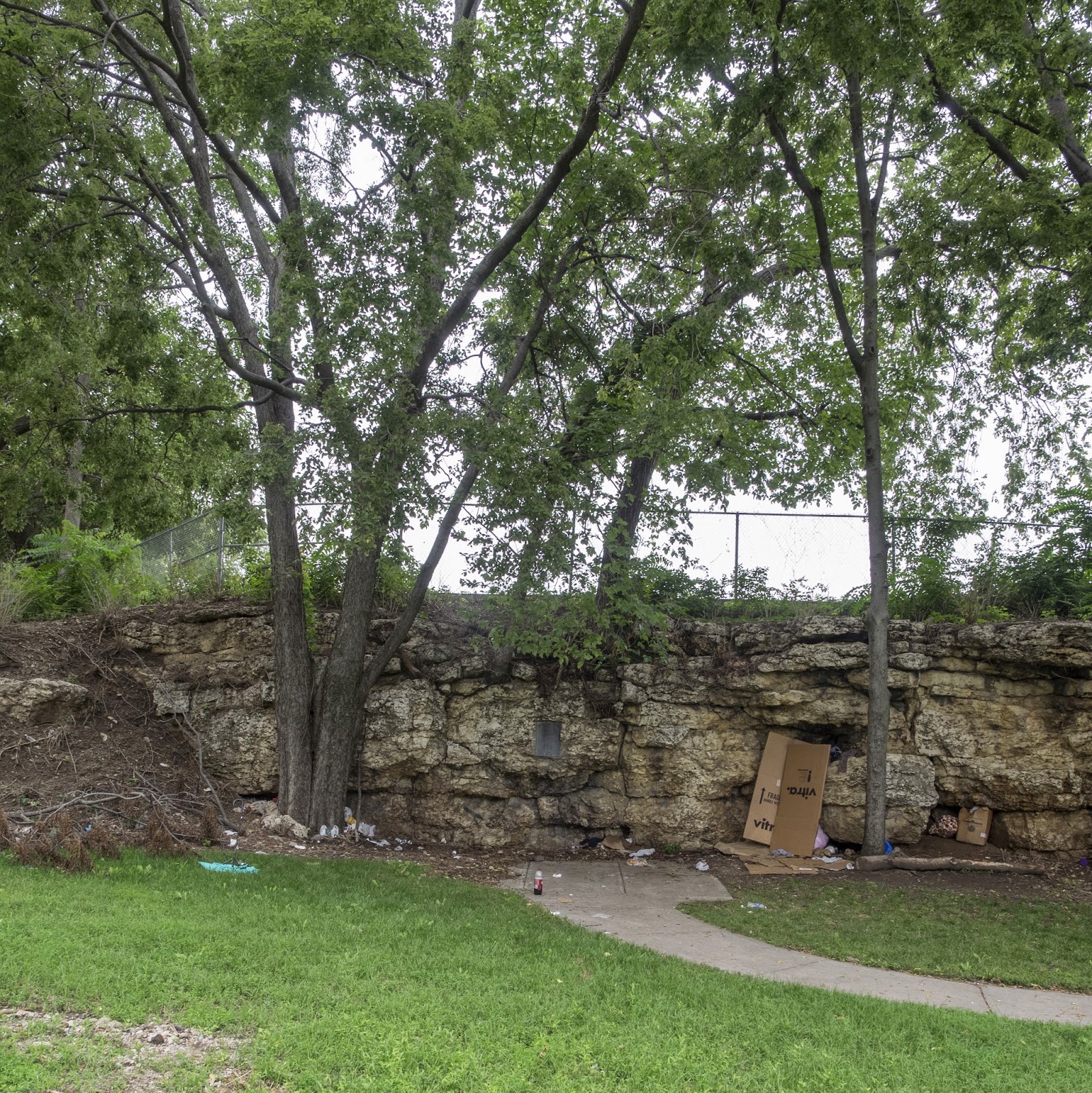 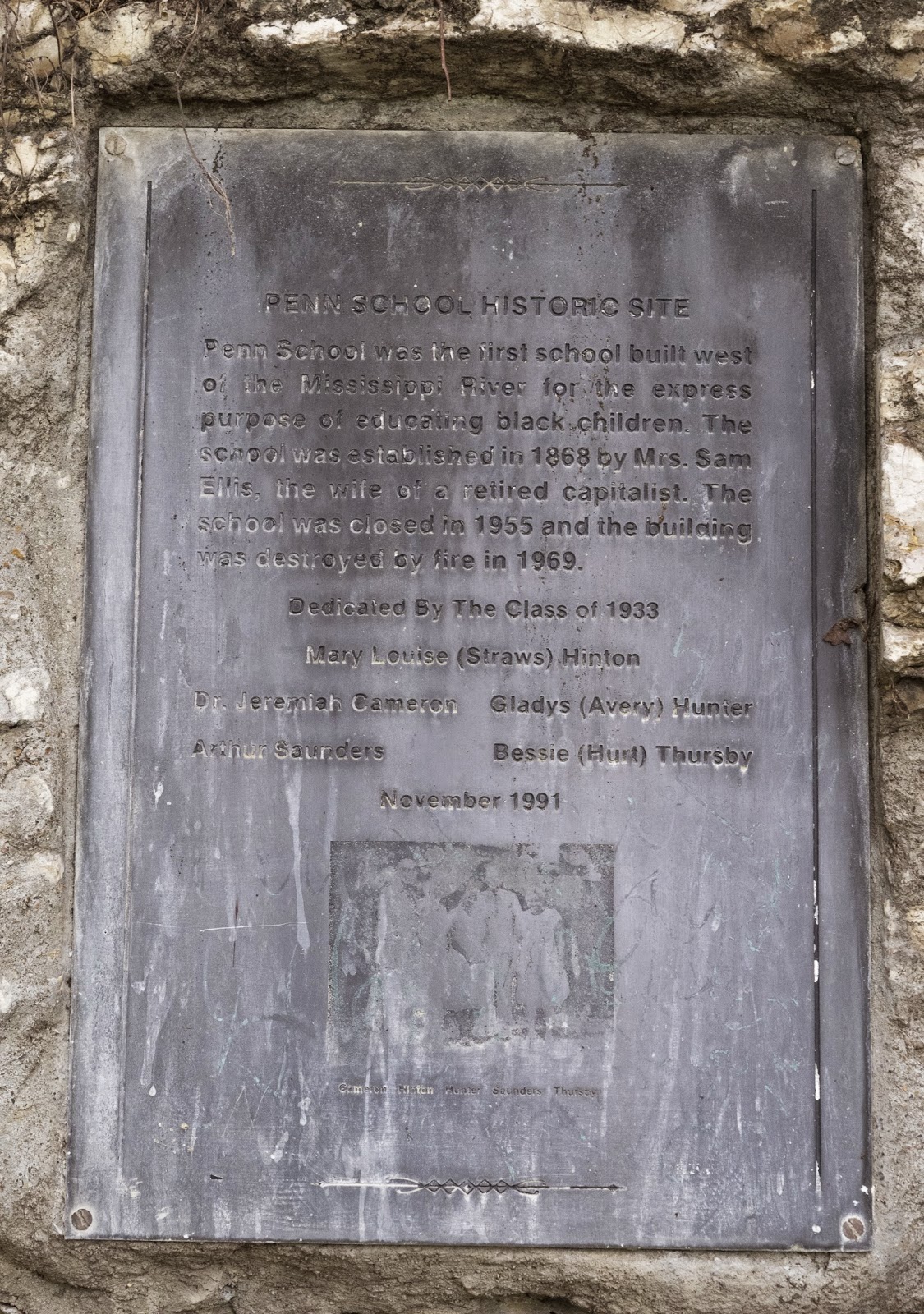 Penn School marker. This can be tough to find. On the west side of Broadway between 42nd and 43rd Streets is a concrete sidewalk leading to the limestone where where this plaque is embedded.

“Penn School, located at 4237 Pennsylvania Avenue, was the first school established west of the Mississippi River devoted to educating African American children. The red-brick three room schoolhouse, named after Quaker William Penn, stood on a limestone outcropping just west of Broadway. Parents of students who attended Penn worked as janitors, domestics and laborers in the area. Art Saunders’s mother, the school’s janitor, fired up the potbellied stove on chilly mornings. Students shared a cup for drinking water. The ring of an old-fashioned bell marked the day’s schedule. During recess, students played on the grassy knoll down the hill south of the school. After school, Charlie and his friends flocked to Manor Bakery, located a few blocks north, to pick up day-old cakes and cookies.” 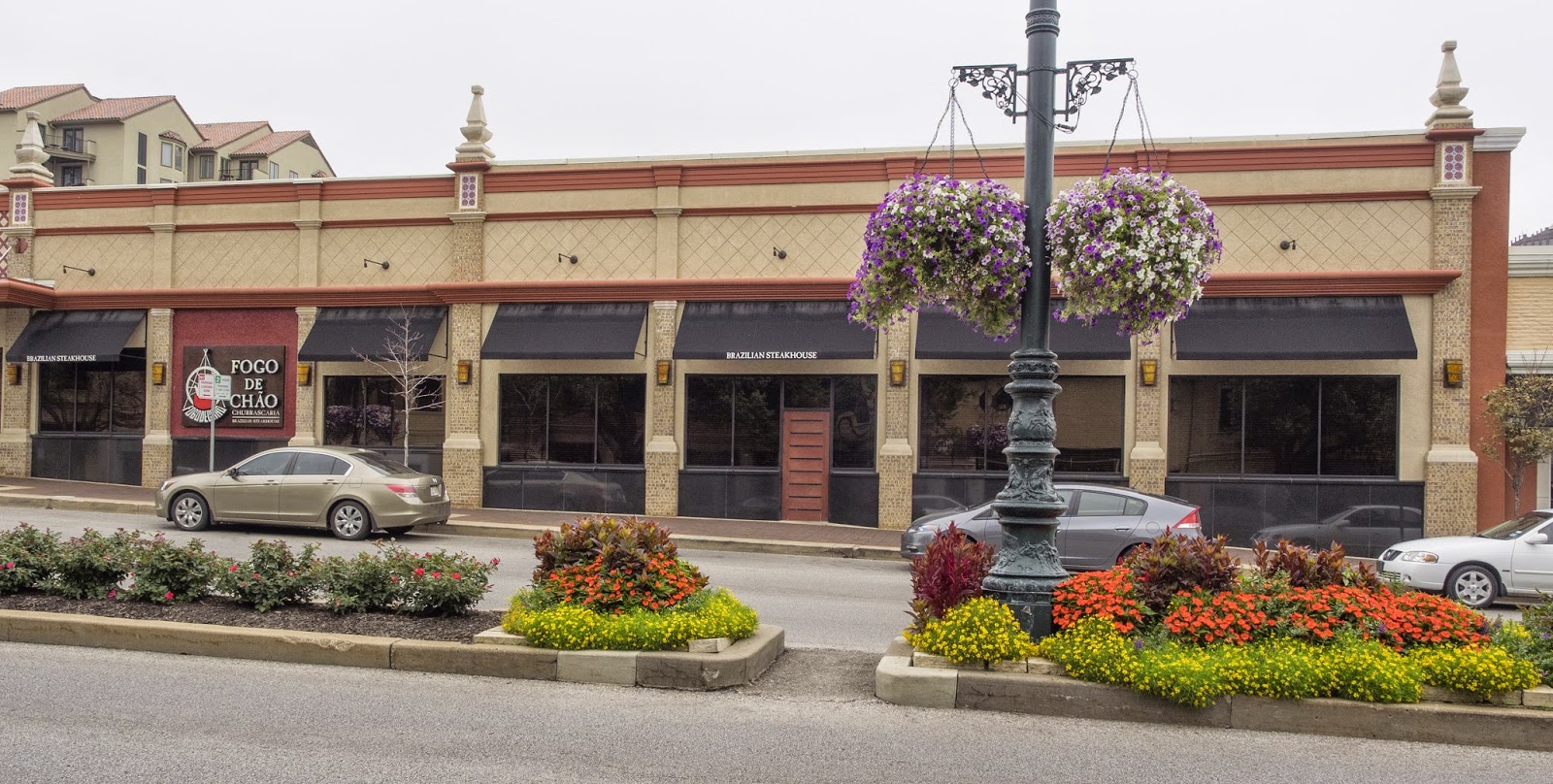 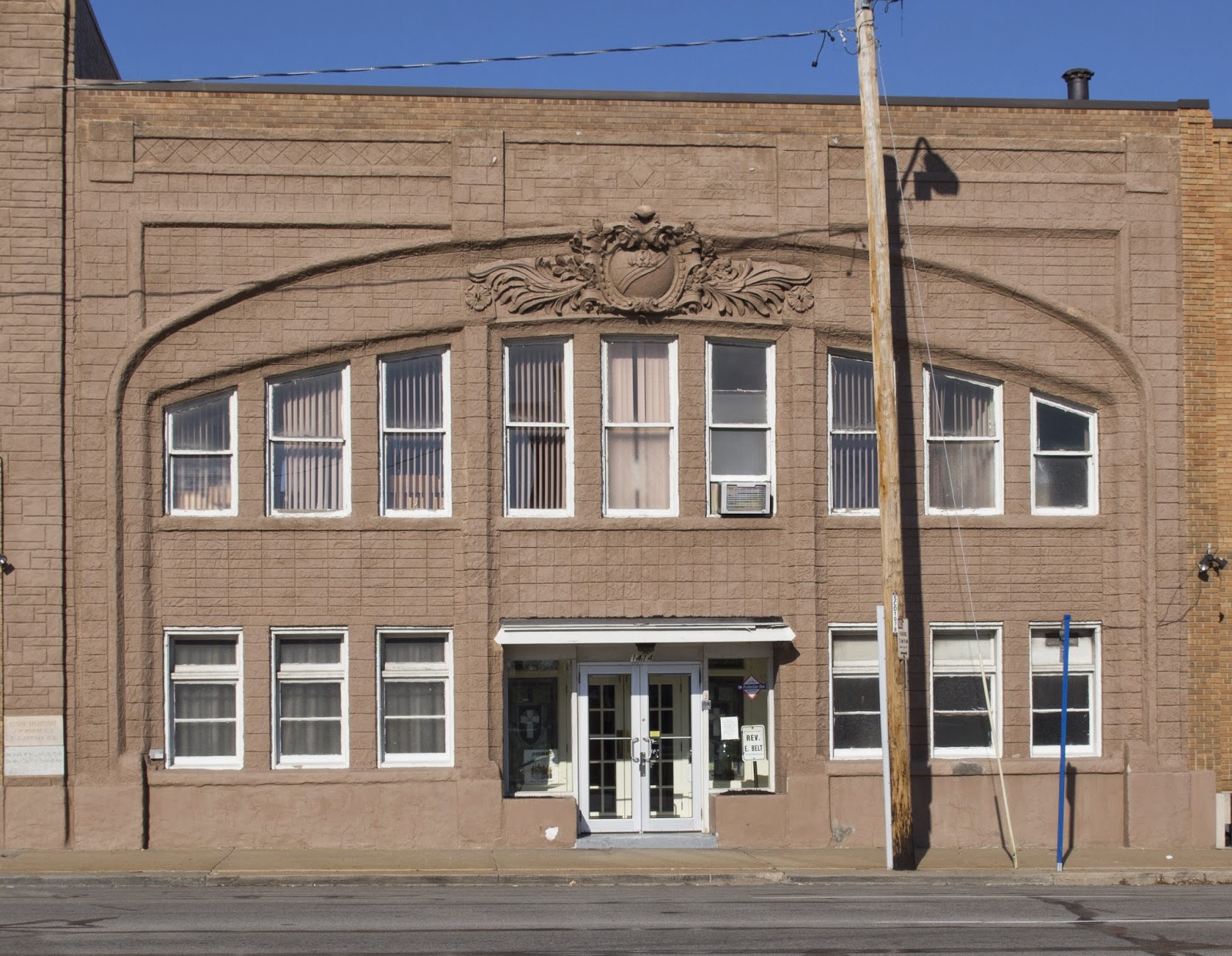 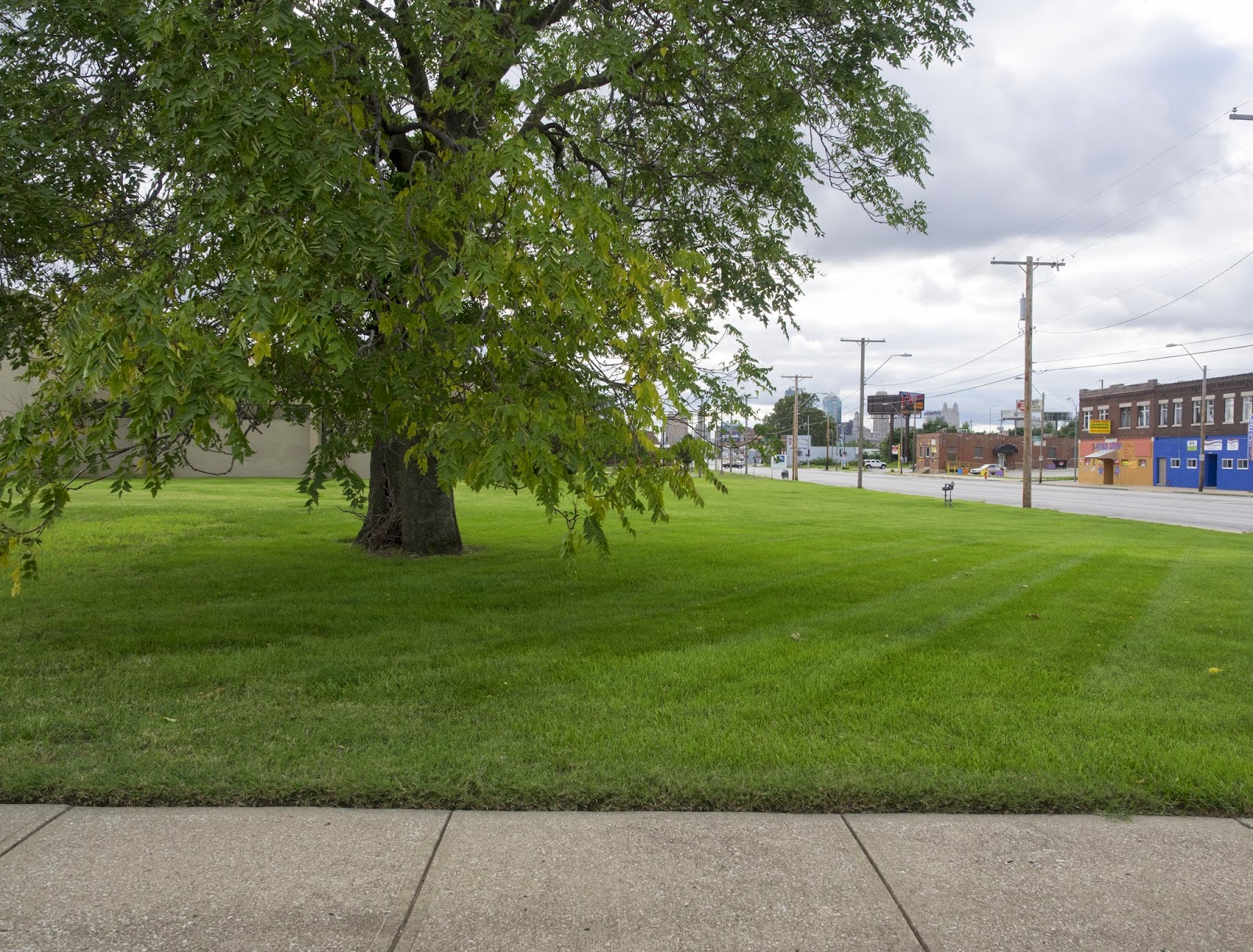 “In the summer of 1932, [Charlie’s mother] Addie left Charles Sr. for good. She found work as a custodian in the offices of Western Union in Union Station and rented a spacious two-story house at 1516 Olive Street located northeast of Eighteenth and Vine, the business and spiritual center for the African American community….” 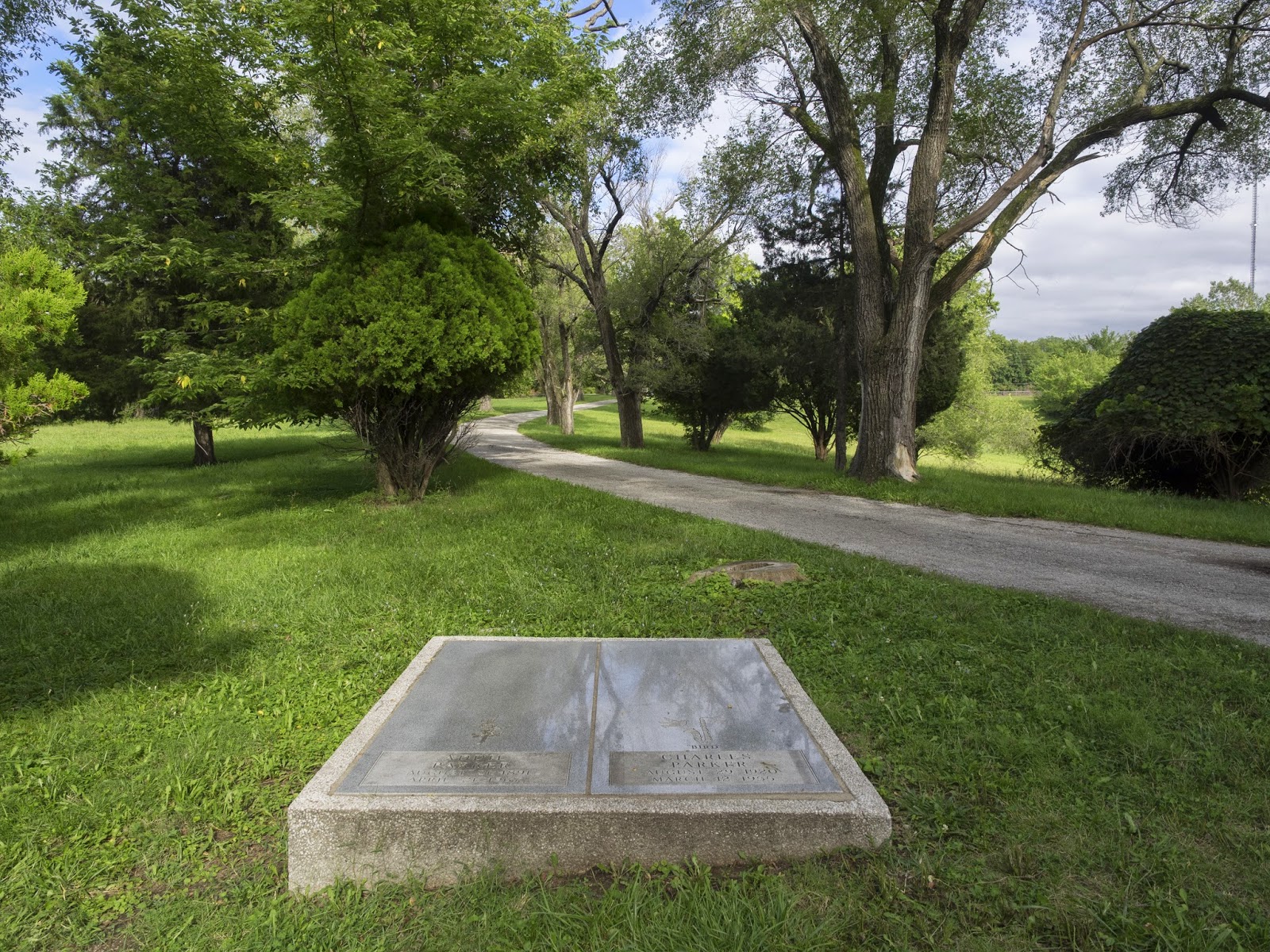 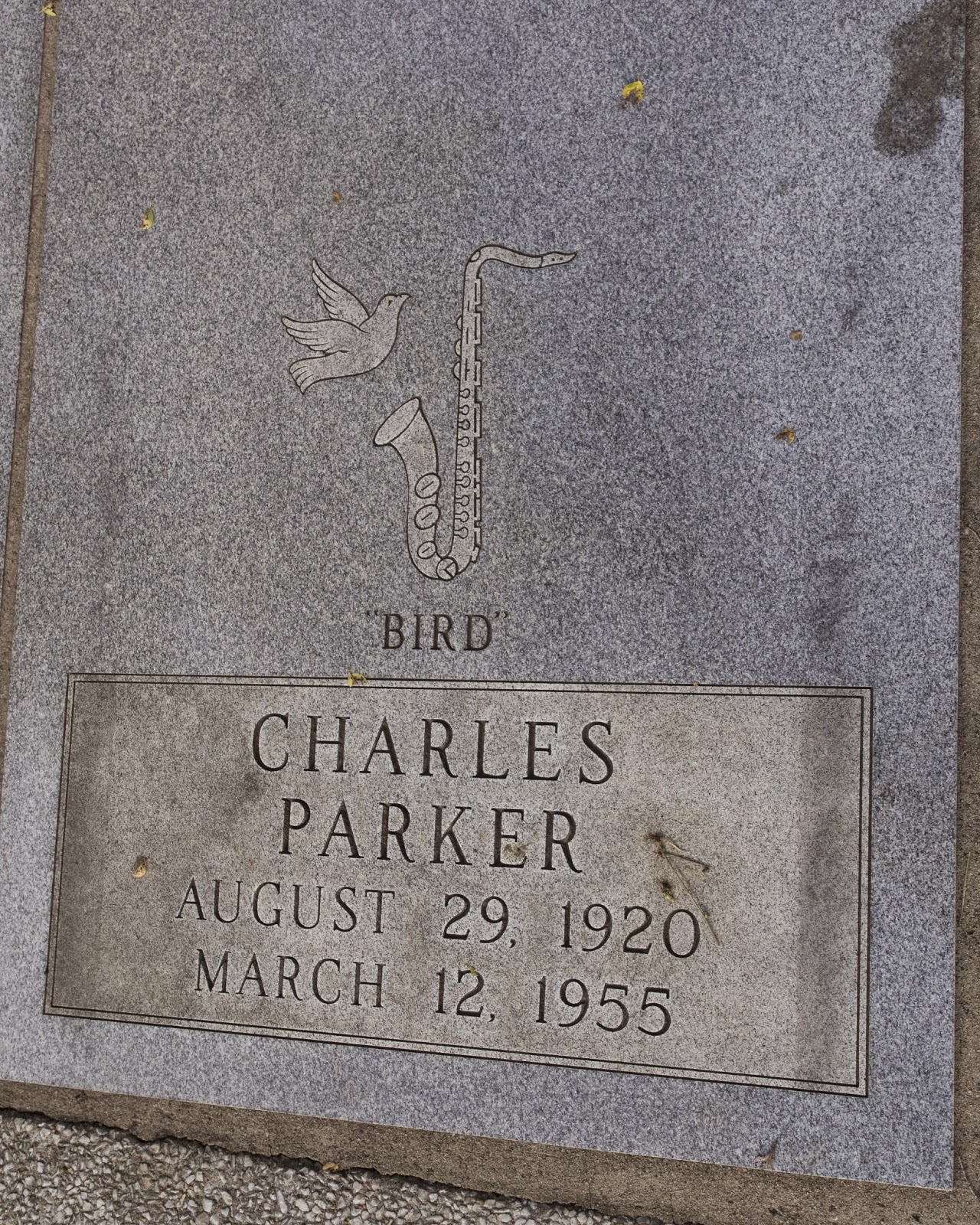 Lincoln Cemetery, off Truman Rd. east of I-435. Addie, Charlie’s mother, is buried on the left and Charlie on the right.

“Members of Local 627 carried Charlie to his final resting place atop a hill in Lincoln Cemetery, an African American cemetery located in an unincorporated area between Kansas City and Indepencence. Addie buried her son under a shade tree, so he would be cool during the summer….”

That was the official tour. But I have one more stop for you. Another building which housed a club where Charlie Parker played, during his formative years with Buster Smith’s band, still stands. 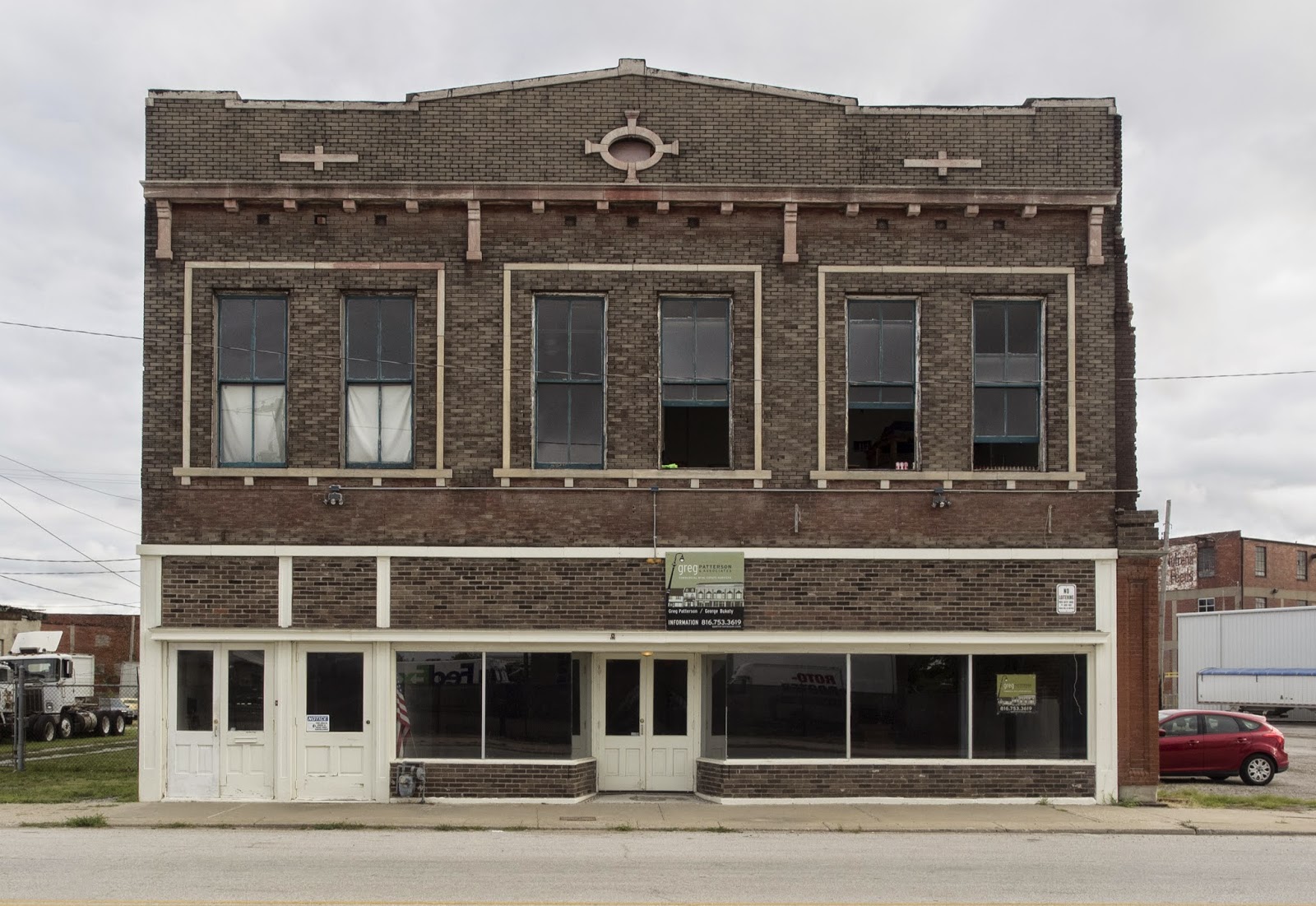 From John Simonson’s wonderful blog, Paris of the Plains (here): “It was once part of what was known in the 1890s as ‘the Wettest Block in the World,’ the block of West Ninth Street between Genessee and State Line in the West Bottoms. So named because almost every storefront on both sides of the street were saloons that served the roughneck stockyards cowboys and workers from nearby meat-packing plants.

“Around that time the second floor of the building at 1717 W. Ninth became home to a young Thomas J. Pendergast, just come to town from his native St. Joseph, Mo., to work in the family business. The Pendergast Brothers Saloon, on the street level, was owned by his older brothers Jim and John….

“Fast forward to the 1930s.... The former Pendergast Brothers Saloon has become the Antlers Club….”

From Bird: The Life and Music of Charlie Parker: “At the end of June [1938], the [Buster] Smith band closed out at Lucille’s and moved to the Antler’s Club.... Once again, Smith was forced to abandon his dream of a big band for a small ensemble to suit the size of the club. After a few weeks at the Antlers, Smith decided to go to New York and find work for his big band….”