The difference in body language caught my attention first.

I sat in a meeting early this summer, in a conference room near 18th and Vine, that included several staff members from the American Jazz Museum. I noticed the way one sat angled in his chair, the edge in a voice when one spoke, the wayward gaze of another. We’ve all sat through gatherings on a bad day. This was different. There was an overarching sense of disgruntlement and defiance, not with the topic at hand but with something else.

Two months later, I sat down to talk with the new interim CEO of the museum for a Q and A in the next issue of Jam magazine. As I walked through the jazz museum offices, I was struck by a fresh feel of excitement, animation, a spark not present before. The difference was palpable. The body language had changed.

That’s just one of the changes Ralph Reid is shepherding through the American Jazz Museum. Following 35 years at Sprint, retiring as Vice President for Corporate Responsibility and President of the Sprint Foundation, Reid brings unique experience and a new outlook. He’s focused on how the museum’s brand is perceived, a key to the success of any corporate behemoth or civic institution. And his words suggest a comprehensive vision, of recognizing the museum’s role in selling the complete 18th and Vine district.

That’s especially important following last week’s announcement at the Negro Leagues Museum. The museums’ back yard is about to change. In a joint venture between the Kansas City Royals, Major League Baseball and the Major League Baseball Players Association, the country’s seventh MLB Urban Youth Academy will be built in Parade Park. From Mayor Sly James’s website (here):


The Academy and park improvements will be developed in two phases:

•  Phase I includes two full-size baseball fields, including one with permanent and portable bleachers for tournament play; two youth baseball-softball fields; a half-mile walking trail with views of the baseball and softball diamonds; relocated basketball courts; relocated and renovated tennis courts, and a new playground near the community center.

•  Phase II includes the indoor training facility with a turf infield, batting cages, pitching mounds, restrooms and concession facilities for the diamonds; a Great Lawn that will serve as a front yard for the Academy and as a shared event space, and additional parking.

Here’s the layout, with the museums highlighted in yellow (clicking on the image should open a larger view): 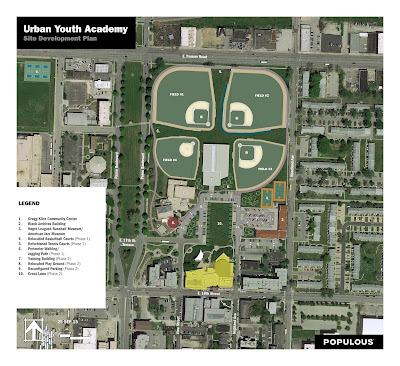 Phase 1 is scheduled to be completed in a year. Fundraising continues for phase 2 with the hopes that the training facility will be standing a year later.

This development brings with it the potential to transform the 18th and Vine district. The district never did and never will thrive on jazz alone. In the 1930s, jazz was the soundtrack to vice. It needs a new companion.

But this district faces special challenges. I’ve quoted often from a 1979 study commissioned by the Black Economic Union and funded by the Ford Foundation which said, in part, that even then people feared coming into the area. The city needs to address an image ingrained for decades and underscored just this past Sunday when, at 2:40 a.m., four people were shot at 18th and Highland, one seriously (news reports here and here). These incidents must end. This isn’t The Plaza where stories of woebegone youth surprise. This is what too many people anticipate here, so they don’t come. The five o’clock news cannot open with reports from the district of “an uptick in crime” and a resident saying, “This is a horrible street to live on” while you ask parents to send their kids to play baseball in the neighborhood park.

Because the possibilities here are incredible.

If the city can stymie the stories of violence, the coming of the beloved and Snow White-sweet Royals, with Major League Baseball, can bestow the district with equivalent of the Good Housekeeping Seal of Approval. They can draw a new audience. Will it be a large enough crowd to entice new restaurants and shops? That’s the hope.

I suspect Mayor James has been pushing for East Crossroads development incentives in part because this revitalization is coming. That’s another element necessary to begin to dispel languishing fears: the district needs a not-so-scary-to-nonurbanites connection to the rest of the city.

I’m aware of two clubs which at least sometimes book jazz being courted to East Crossroads. Could this city, in a few years, boast of Green Lady Lounge accompanied by some new jazz cohorts jamming in an area that leads to an 18th and Vine district with The Blue Room, the Mutual Musicians Foundation broadcasting its new radio station and a Major League Baseball facility training future major leaguers? Many discussions are preliminary. Money needs to be raised. So much could yet fall elsewhere or simply fall apart. But today, all of the critical pieces are dangling for that vision to be a possibility.

The vision. I spoke with Ralph Reid just two weeks after he took over leadership of the American Jazz Museum. He was uncomfortable attaching the word vision to his ideas and plans. Yet, Reid’s Sprint experience in community outreach and his time spent on the boards of other major not-for-profit organizations brings the experience and vision needed at the jazz museum during a time of district transitions. He’s another critical piece.

A few weeks ago, on KCPT’s Kansas City Week in Review, I watched as the panelists speculated on whether Ralph Reid might consider staying on at the museum past his designated interim role. I thought, I know the answer to that. I asked him that question earlier in the week. And the answer is…

…in the next issue of Jam, available around town starting later this week.