Editing Jam takes a toll. Three weeks and nary a new post.

This blog has been neither forgotten nor ignored. But as editor of Jam magazine – I still want to say new editor, but three issues in I’m not sure that holds – I’m finding that every couple of months, a few weekends need to be handed over to producing the next issue. I have neither the time nor stamina to spend a weekend writing and editing articles for the magazine while simultaneously mustering pithy thoughts here.

This week’s post is short, as I recoup from last weekend’s 4 a.m. nights. But the result is worth the effort. The December/January Jam printed last week and is being distributed around town now. It’s far from perfected, but this issue comes closer to my vision for the magazine, which celebrates 30 years of publication in 2016. Jam is developing a new voice and a fresh look. I have found that even in this digital century, holding a slick printed document remains important to many. 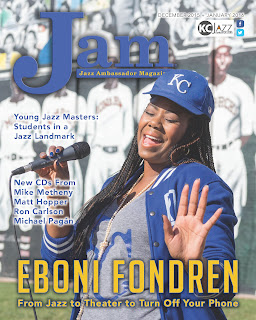 I share the new issue’s cover to shamelessly promote it. That’s singer Eboni Fondren decked in Royals gear and standing on the small baseball diamond adjacent to the historic Paseo YMCA at 19th and The Paseo.

Clearly, the photo is inspired by the Royals’ World Series championship. But it works in part because in Kansas City, baseball and jazz have long been kissin’ cousins. In the 1920s and ’30s, when a new style of jazz was growing up in this city, the Kansas City Monarchs dominated baseball’s Negro Leagues and were as integral to the fabric of 18th and Vine as were music and vice. The Monarchs’ office stood on 18th Street, between The Paseo and Vine. They played in Municipal Stadium at 22nd and Brooklyn.

Add September’s announcement on plans to build the nation’s seventh Major League Baseball Urban Youth Academy in Parade Park, behind the jazz and Negro Leagues museums. If the city can find a solution to taming crime in the district, and the devastating news stories that crime generates, this development will attract a new audience to Kansas City’s historic jazz district. It further strengthens Kansas City’s historic bonds between baseball and jazz.

But while baseball season has ended for this year, jazz continues. Diana Krall performed at the Midland on Saturday night. And Friday night, she sat in with Matt Otto at The Blue Room on his last set. That’s the kind of thing that doesn’t happen just anywhere. The loss of Take Five and The Broadway Jazz Club means fewer opportunities for musicians to perform. No question, it’s a setback. But the wealth of jazz talent in Kansas City today will keep the music thriving, and will keep performers like Diana Krall getting out when they visit to sample what we have going on.