In editing Jam, I’ve found some CD reviewers get into what I find to be the musical weeds, praising elements like “rapid fire sixteenth-note bursts.” I’ve never attended a music class in my life and I wouldn’t know a sixteenth note burst from the movie Sixteen Candles. My reaction to music is more simplistic and visceral. It generally boils down to either (a) I like it or (b) I don’t like it. 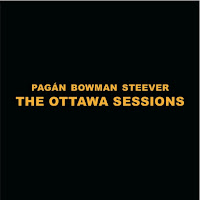 For instance, I like the Michael Pagan / Bob Bowman / Brian Steever CD, The Ottawa Sessions, recorded at Ottawa University’s Fredrikson Chapel. Starting with the joyous bounce of Lullabye of the Leaves, these musicians are engaged in a musical conversation. Pagan’s piano winds over, under and around Steever’s propelling drums on the rambunctious Hebgen Happy Hour. Softly, As in a Morning Sunrise invites you to pay attention through a more intimate but no less engaging journey. Bowman’s intricate plethora of notes delights on Owe You Blues (“intricate plethora of notes” – that’s as technical as my reviews get).

Repeatedly you’re struck by how integral each musician is to this music. Any piano trio could easily devolve into little more than the pianist’s showcase. And Pagan’s playing, consistently expressive, excels. But it is the artistry and interplay between three of today’s Kansas City jazz masters that gives this CD its exceptional voice.

The Ottawa Sessions can be found on Amazon here, on CDBaby here, and on iTunes here. 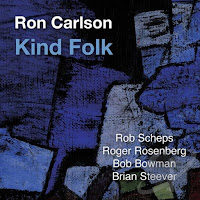 No less delightful is Ron Carlson’s new CD, Kind Folk. Carlson was nudged into the studio by Rob Scheps, who joins him on saxophone and flute. Also joining all numbers are bassist Bob Bowman and drummer Brian Steever, who are clearly not spending all of their spare time in Ottawa, and baritone saxophonist and bass clarinetist Roger Rosenberg visiting with Scheps from New York.

Carlson’s name may grace the cover of the CD, but his role here is more often that of host and glue, clearly driving the rhythm but letting the other musicians shine. On the title tune, Scheps and Rosenberg invitingly layer saxophones over and around Carlson’s compelling guitar. On the ballad First Song, Rosenberg’s bass clarinet glides beautifully, followed by Scheps’s smooth but darting flute, before both weave together with grace. 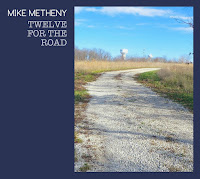 Where the first two albums are unabashed swing, Mike Metheny’s new CD. Twelve For the Road, experiments. Our friend Plastic Sax described the sound as “electronic space music.” That fits many of the selections.

But not all. The brief For Parkville is one of the most conventional and most appealing numbers to a non-music-educated luddite like me. Carousel brings to mind a slightly off-kilter score to a Fellini film. Both feature Metheny on keyboards. He’s on keyboards on most numbers here. His flugelhorn comes out on Home, with a sound smoothly dense and welcome.

Much of this music rides the edge of jazz. I understand and appreciate an artist reaching for new directions. But sometimes electronic experimentation in music leads me to greater appreciation of the conventional. I suppose that’s just the simple and visceral in me.

Twelve For the Road is available on Amazon here, on CDBaby here and on Mike Metheny’s website here.