The Importance of Buster Smith. And Lucille's.

In 1987, the city started to demolish the building behind this painted false front. It was dangerous, they said. Protesters screamed that the building is a crucial piece of Kansas City jazz history. The process was stopped and a city department head later said he made a mistake. 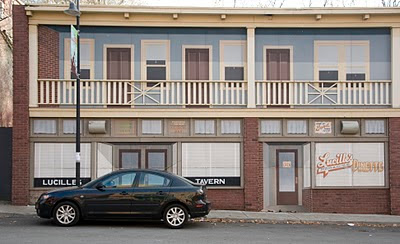 Behind there, at 1713 E. 18th Street, next door to the Kansas City Call, stood Lucille’s Paradise Band Box. There, in 1938, Buster Smith tutored a teenage Charlie “Bird” Parker on playing the alto sax.

“I couldn’t get rid of him. He was always up under me. In my band we’d split solos. If I took two, he’d take two. If I’d take three, he’d take three, and so forth. He always wanted me to take the first solo. I guess he thought he’d learn something that way. He did play like me quite a bit, I guess. But, after a while, anything I could make on my horn, he could make, too, and make something better of it.”

One of the most influential yet today least known names in KC jazz history is Henry “Buster” Smith, also called “Prof.” His name came up repeatedly in my Reno Club posts (here and here).

“Buster was...a great improviser. He didn’t have the strong sound of Johnny Hodges, Bird or Benny Carter. He had a soft alto sound…. But though it was soft, he was very good playing lead. And when Benny Goodman or any other clarinet players came into a [jam], Buster would get his clarinet out and clean everybody up, including Benny.”

Buster Smith started with the Blue Devils, a band which Bennie Moten raided for the musicians who made his own band great, including Smith.

[After Moten’s death] “I...went down to the Reno and carried my repertory with me. Basie told me, ‘Prof, I’ll tell you what I’ll do. We’ll organize the band and have a partnership. It’ll be your band and my band…. I said okay, be fine. So we started the band and split our money.”

“Buster Smith’s influence was not so direct…. Buster would set riffs. There might be one trumpet and ten saxophone players. Usually, when one horn sets a riff, the other guys play in unison with him, but with Buster the other horns had to harmonize. Then it would sound like a written chorus, and that’s what you hear on records when Basie’s band was jumping so good.

“Buster was noted for that, and for eliminating those who didn’t get the harmonic notes right in the riffs. You may have played your solo well, but you had to get out and not play for a while. Buster would always do that at jam sessions where there were too many horns. The guys would take their horns to a table and listen to the heavy riffs he set.

“It made them think, yes, but it also showed the young guys that they had to learn to team as well as play a solo....

“All this was inspiring to Bird, who learned many tricky riffs that way.”

“We’d heard so much about how somebody was going to come and get the band and make it big, I just didn’t think anything about it – figured it was just more talk – so I left.”

“I guess Prof didn’t really think we were going to make it into the big time. I don’t know.”

“I had to do something for myself and I made me up a band, got Charlie Parker and a bunch of boys…and then Lucille’s Paradise wanted me to work up there…. Charlie Parker and about six of us was playing up there every night. I think we was off one or two nights. During them nights I would take [a] big band out on some of them club dates, social functions, like that…. But I used Charlie in both bands….

“I had the band about two years and Charlie was with me all that time. He was the youngest cat in the band…. He was a little hot-headed sometimes, and he wouldn’t stay with nobody but me. He stayed with me longer than anybody ’til he got with McShann.”

But by staying here, Prof rarely recorded. He moved to New York for a short time (Bird followed), and solos as a sideman on recordings made there – 1939 and early 1940s Pete Johnson/Big Joe Turner, Eddie Durham and Hot Lips Page sides – provide glimpses of his genius.

“I had saved up a little bankroll…and I said, ‘I think I’m going back to Texas.’ I had lost my father and I couldn’t even be there, to see him put away…. [I] opened me up a restaurant and organized a eight-piece band…playing all them little shows around here.”

In 1959, Prof recorded an album in Dallas, but by then he was past his prime. An auto accident in the 1960s left him with dental problems and unable to play sax. He continued performing on piano and bass.

“He was a nice, easy going man…. He told me once he was sorry in a way that he didn’t go with Basie, yet I think it was Buster who really made the Basie band what it was, a riff band with very little music.”

“He’d listen to you. He used to call me his dad. I called him my boy.”

Basie’s co-leader and Bird’s tutor died in Dallas in 1991.

Quotes by Count Basie are from his autobiography, Good Morning Blues. Quotes by Buster Smith are from a 1960 interview in The Jazz Review and from the book, Goin’ to Kansas City. Quotes by Gene Ramey are from the book, The World of Count Basie.
Posted by kcjazzlark
Email ThisBlogThis!Share to TwitterShare to FacebookShare to Pinterest
Labels: Buster Smith, jazz, kansas city, Lucille's Paradise, Reno Club