I came to jazz via Basie. It's music that's great because it makes me feel great, a visceral reaction. Music, for me, doesn't need to be any more complicated than that.

Except it always has been. Duke Ellington's Harlem Air Shaft has been, since the first time I heard it, one of my favorite compositions. In three minutes it musically illustrates a cornucopia of joys and sorrows one might hear in a Harlem tenement if, for a day, you just listened. It swings while driving you to think. 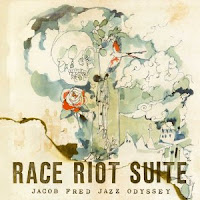 Similarly, Jacob Fred Jazz Odyssey's Race Riot Suite is jazz which drives you to think. It musically tells the story of the today little known 1921 Tulsa race riots, in which hundreds of black citizens were killed and a district in the Oklahoma city was destroyed.

It starts with Black Wall Street, a musical portrait of a wealthy black community, a composition of joy, yet just enough off-kilter to foreshadow the disaster to come. The Burning musically paints confusion and devastation, with kaleidoscopic moments that seem to picture someone caught in the middle wondering, What's going on?

Mt. Zion views an aftermath with reflection and hope. Cover Up illustrates a discordant attempt to bury the disaster in history. Eye of the Dove pushes forward a community and story which defied burial.

But unlike Ellington's Harlem Air Shaft, a wonderful composition even if you never know what it represents, Race Riot Suite requires knowledge of the backstory and its chapters to appreciate the music. The first time I listened to the CD, I didn't know the history, and the music came across as the type of modern, eclectic jazz that you'll never hear from Basie or Ellington, and which I generally don't enjoy. Only after reading the history this CD musically represents, did I appreciate what I heard. This is jazz to enjoy intellectually.

Jacob Fred Jazz Odyssey's Race Riot Suite is available from Amazon, here, or can be downloaded from iTunes, here. 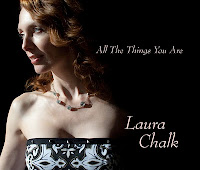 In a far more traditional vein – that we came-to-jazz-via-Basie guys can appreciate without the liner notes – vocalist Laura Chalk's All the Things You Are brings together some of Kansas City's best jazz musicians.

After all, you cannot go wrong with Paul Smith on piano, Bob Bowman on bass, Tim Cambron on drums, Danny Embrey on guitar, or with Laura's own son, emerging sax superstar Matt Chalk, on alto.

Danny's guitar solos on Desafinado, Say It Over and Over Again and The Duke alone are reason enough to buy this CD. Now add Paul's piano solo on All the Things You Are and Bob's bass on Vello Piano. Next hear Matt's soulful sax inventiveness on Em Casa Sozinho. You'll understand why Kansas City instrumentalists are some of the jazz world's best.

Laura is returning to KC's jazz scene after years as a single mom. Her voice brings the right intonation for these classics, but most are delivered with a careful exactness and not yet with the carefree emotion or excitement of other area jazz singers. The concluding number, The First Time Ever I Saw Your Face, driven by Danny's guitar, carries the most emotion. But that self-confident looseness which can be the difference between hitting the perfect notes (which she does) and overwhelming impact isn't quite there. This is a work in process, and one worth following.

All the Things You Are is available from CD Baby, here. 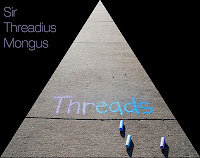 I have a confession.

Since Jeff Davis, leader of Sir Threadius Mongus, moved to Kansas City, he's sent me press releases. He's introduced himself (and is a nice guy). He's given me Sir Threadius Mongus CDs and musical tracks. He's done everything a person could do to garner mention in a Kansas City jazz blog. Yet, until now, he's never been mentioned.

I've attended a couple of Sir Threadius Mongus shows at Jardine's. The group plays a style of modern, free-form jazz which just doesn't appeal to me. There's nothing wrong with the music. It's just not a type of jazz I find accessible, and not what I personally prefer hearing.

I was interested, though, when Jeff sent the tracks to the latest Sir Threadius Mongus CD, Threads. The group has evolved since moving from Tulsa. This edition includes Andrew McGhie, one of the best young tenor saxophonists in Kansas City, and Stan Kessler, unquestionably one of KC's premiere trumpet players. Matt Otto, a saxophonist who has made a top-tier name for himself since moving here from California, is included. Several other members are a part of People's Liberation Big Band, an eclectic and fun group I've photographed a couple times. The talent on this CD is outstanding.

The music wisely thrusts that talent forward and lets it shine. The inventive ideas which come through sax solos on Before That are obvious even to a codger like me. Purr, one of three tracks recorded live at KC's R Bar, intrigued most, pulling me in with sax and guitar intertwined with vocals by the extraordinary Annie Ellicott.

Threads will be in stores on November 11th. 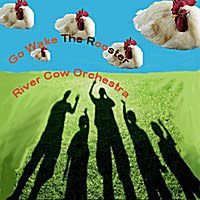 River Cow Orchestra is a Kansas City group which bills itself as playing "zen jazz," which they describe as "collective spontaneous free improvisation." Their business card bills their music as "jazz for the third millennium."

If their fifth CD, Go Wake the Rooster, is any indication, the third millennium is going to be filled with space age music of repetitive sounds which I have an awfully hard time classifying as jazz.

It's modern music without the whimsy of People's Liberation Big Band, or the intellectualism of Jacob Fred Jazz Odyssey.

I didn't appreciate Jacob Fred's Race Riot Suite until I understood the story behind it. And maybe there's more here than I'm understanding. But as someone who came to jazz via Basie, this is music I just don't get.