A Wonderful Festival, and a Conundrum

Crowds filled the field behind the American Jazz Museum last Saturday night – I’m guessing 7000 people by that point – for the 2011 Rhythm and Ribs Jazz and Blues Festival.

Maybe half the audience was standing, swaying along to the music, clearly enjoying the beautiful night. Some grasped their partner’s hands and started to dance. The vocalist on stage cried out, “You know the words!” as he thrust his microphone towards the crowd.

And don’t kid yourself: When the group War started performing, Rhythm and Ribs stopped being a jazz and blues festival.

It’s a conundrum to which I have no answer. From Newport to New Orleans, jazz festivals are booking pop acts to draw the crowds necessary to attract the sponsorships necessary to build the money necessary to stage a significant event. Today, jazz and blues are apparently too narrow a niche to draw sufficient festival crowds without a pop push.

It’s not a new phenomenon. In the 1980s, we sold the Kansas City Jazz Festival not as a jazz festival but as the city’s major event the weekend it was staged. We tried to sell the idea that if you missed this event, you were missing what everyone would be talking about on Monday morning. We signed the city’s top rock station as a sponsor, to draw people out to party. We did that because we knew jazz alone was an insufficient sell to fill an outdoor festival in Kansas City. Booking the funk group War is simply another means to the same end.

I don’t accept that War’s funk is really just another version of jazz and blues, as a panel discussion in The Blue Room a couple weeks back tried to establish. I accept that funk contains elements of each. I accept that it’s an evolution from earlier genres. I’ve demonstrated to friends many times rock and roll growing out of the blues via Big Joe Turner. But rock grew into a new genre. Likewise, funk is no more jazz and blues than my smartphone is a desktop computer, though in both cases one evolved from the other.

Yet it’s those tenuous ties that justify a funk band in a jazz and blues festival. You could argue that’s no better or worse than marketing a jazz festival on the back of rock radio, and I couldn’t argue you’re wrong. To fill the field at an outdoor festival, jazz needs the support of its offspring.

It’s a conundrum to which I have no answer.

That commiserating aside, let’s recognize that the 2011 Rhythm and Ribs Festival was a wonderful success.

Crowds packed the American Jazz Museum’s atrium and The Blue Room for what were, effectively, the side stages. By the time Bobby “Blue” Bland walked onto the main stage, the outdoor field behind the museum was hosting thousands of guests. Before the last act took that stage, food vendors were selling out, delighted with their day. The crowd was friendly and happy. Plenty of legitimate jazz and blues acts were showcased throughout the schedule. I know nothing about the festival’s finances, but by every other measurement, this year’s festival met its goals in a magnificent way.

I’ll offer more observations about the festival in future posts. But for now, let’s enjoy a few photos from the weekend. I’ll also offer more photos in future posts, but those take a while to sort through. Until I have that opportunity, here's a sampling: 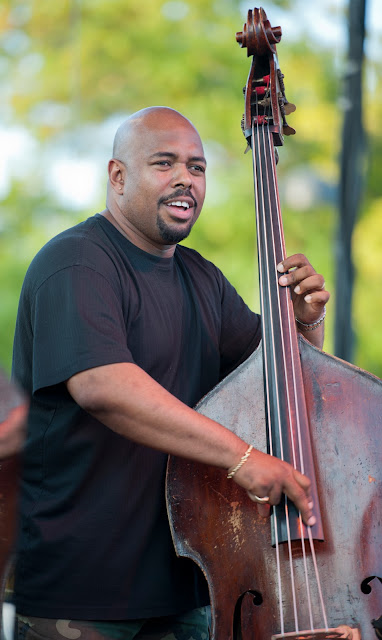 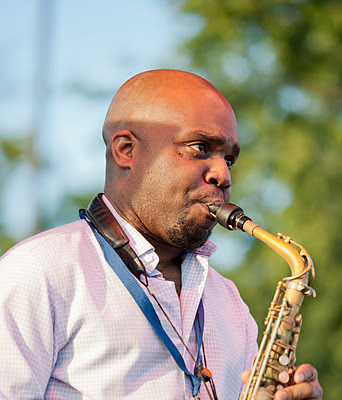 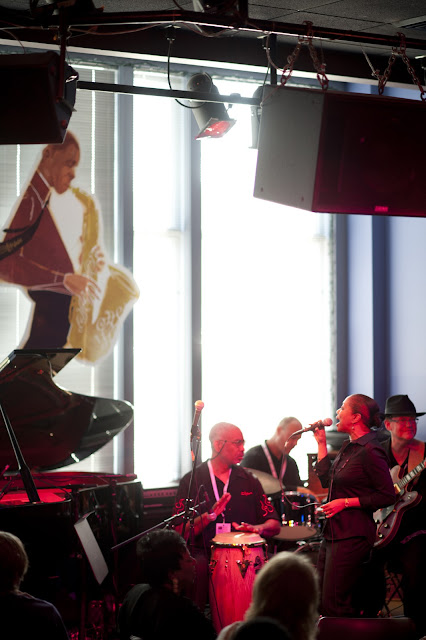 In The Blue Room, Millie Edwards, of The Wild Women of KC, sings to a saxophonist joining the front window just for the festival 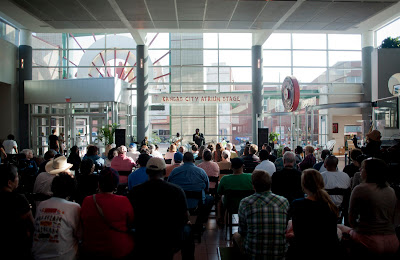 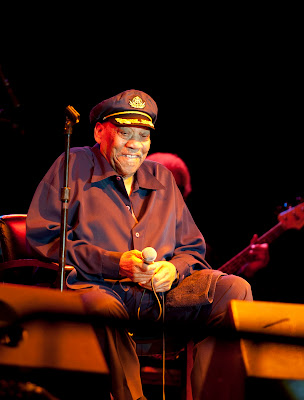