I hold a vested interest in this one.

I booked the talent for this year’s Prairie Village Jazz Festival, with the mayoral-appointed committee’s advice and consent. The festival takes place September 8th in Prairie Village’s Harmon Park (at 77th and Mission Road, next to Prairie Village City Hall and Shawnee Mission East High School). The sponsor is BRGR, with a pair of terrific restaurants in Prairie Village. The lineup was announced last week.

This suburban festival aims at celebrating Kansas City jazz, seeking headliners with KC roots and filling out the schedule with a sampling of some of the best local talent. Last year’s event was rained out after the second act. This year’s number one goal: Clear skies.

With the lineup officially announced, let’s take a look at the September 8th headliners and the full schedule, peppered with photos I’ve taken of these KC jazz all-stars over the last couple of years. 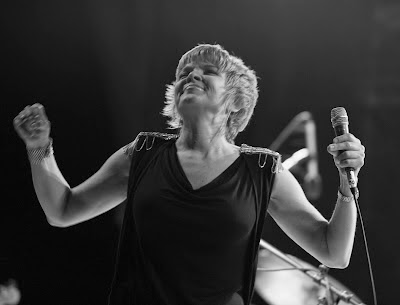 Karrin Allyson performed a few songs with The Kansas City Jazz Orchestra in the first Prairie Village Jazz Festival a couple years back. This year she returns for a full set with her own group, her first KC performance in nearly a year. Since then, her album, ’Round Midnight, was nominated for a Grammy. 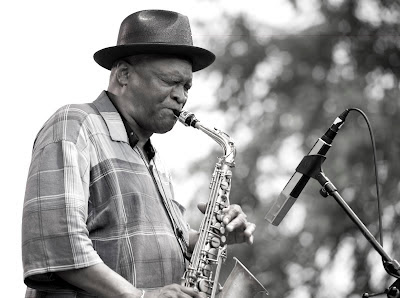 Bobby Watson was rained out last year, so of course we wanted to hear what the drenching made us miss. After all, Bobby is an international jazz superstar from whom we cannot hear enough. 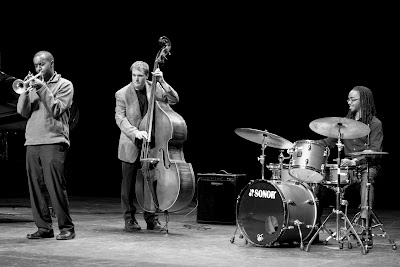 3:00 - 4:00 p.m: Diverse – I've raved about the various incarnations of this young group since the blog began. After the festival, I get to rave once more, because drummer Ryan Lee (pictured above) leaves town in August. Brad Williams will join trumpeter Hermon Mehari and bassist Ben Leifer (also pictured above) to open the day. 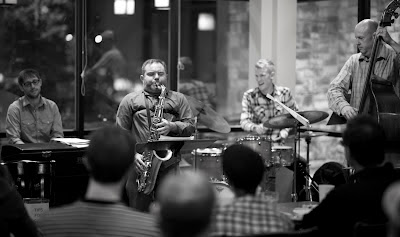 4:20 - 5:20 p.m: Rich Wheeler Quartet – Rich is one of KC’s best saxophonists whose name few beyond musicians know, because he usually plays as a sideman. But not this time. At the festival, the secret is out, as he heads most of the group I photographed in May: Rich Wheeler on tenor sax, T.J. Martley on piano, Bill McKemy on bass and Sam Wisman on drums (Brian Steever drums in the photo above). 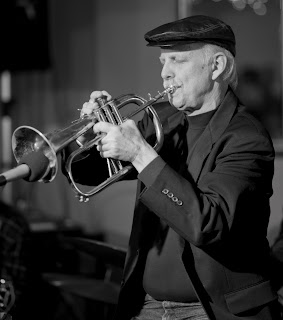 5:40 - 6:40 p.m: Mike Metheny Quartet – I’ve told Mike repeatedly we have far too few opportunities in KC to hear him play. Last year’s festival was going to correct that but Mike, like Bobby, was rained out. When you hear Mike Metheny on trumpet, flugelhorn, and/or EVI, with T.J. Martley on piano, Gerald Spaits on bass and Todd Strait on drums, you’ll understand why we were thrilled when Mike agreed to try again. You’ll also find him at the Metheny Foundation tent at the festival. 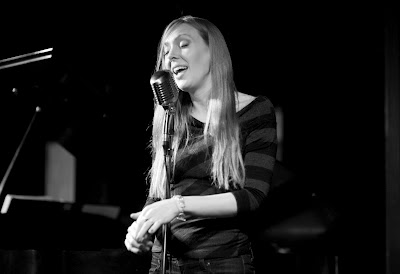 7:00 - 8:00 p.m: Megan Birdsall Quartet – Megan is one of KC’s most magnificent vocalists. I can’t say it any more plainly than that. If you haven’t had the delight to hear her live, here's your chance. If you have heard her, you know why you want to be in the audience on September 8th. Her group will include Megan Birdsall on vocals, Wayne Hawkins on piano, Bob Bowman on bass and Matt Leifer on drums. 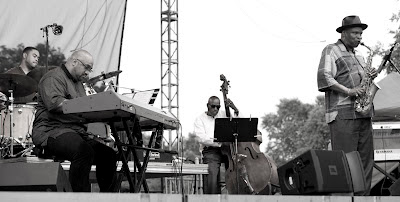 8:20 - 9:20 p.m: Bobby Watson Quartet – Bobby will be performing with the quartet pictured above, the one with whom we’d hoped to showcase him with last year. With Bobby Watson on alto sax, his longtime bassist Curtis Lundy flying in from New York, Chris Clarke on piano and Michael Warren on drums, it’s hard to imagine a better headliner in any jazz festival.

9:40 - 10:55 p.m: Karrin Allyson Quintet – When Karrin lived in KC, I went to The Phoenix nearly every Tuesday night and sat at the piano bar to hear her on vocals and piano with Rod Fleeman on guitar. I knew I was hearing a talent who would someday be internationally recognized as a jazz star. With multiple Grammy nominations now under her belt, here's a chance to see one of jazz’s best vocalists, with Karrin Allyson on piano and vocals, Bob Sheppard from Los Angeles on tenor sax and flute, Rod Fleeman on guitar, Gerald Spaits on bass and Todd Strait on drums.