This 'n That 'n Epitomizing Nothing

“Behind the scenes at the annual Christmas lights extravaganza on the Country Club Plaza, Harvest Productions Inc. pulled the strings for the third year in a row….

“After Plaza owner Highwoods Properties Inc. picked Harvest over several other companies to take over the show from Pat Riha Productions, Harvest moved back the climatic moment to the end of the hourlong TV broadcast to try to keep viewers throughout….”

From the November 25 blog entry of Plastic Sax:

The Plaza lighting ceremony eliminated jazz! The sky is falling!

Okay, that last paragraph was a liberally interpreted paraphrase.

Plastic Sax (here) notes that Kansas City is internationally associated with jazz, barbecue and the Plaza lights. No argument there. “That’s why,” he adds, “the fact that the annual lighting ceremony on Thanksgiving no longer features jazz seems to epitomize jazz’s declining prominence.”

I’ll bet Kerry wishes he still had that gig. But after 14 years, Plaza officials decided it was time to freshen the ceremony. They brought in a new producer and new bands. That happens with successful businesses. Jazz losing one prominent party a year does not epitomize anything.

After all, I’ll bet after a reasonable break the ceremony features a jazz group again. The year they do, will anyone declare that epitomizes pop music’s decline?

Friday’s Kansas City Star Business pages noted downtown’s new Kill Devil Club has been recognized nationally on a list of The 21 Hottest Cocktail Bars Across the U.S.: Where to Drink Right Now. It was honored for its mix of live jazz and cocktails.

A glance at their December schedule (here) reveals a slate of mostly more traditional and hard swinging jazz sounds: David Basse, Grand Marquis and Bram Wijanads, to name a few.

A club’s success is all about creating an environment people enjoy, where they feel comfortable, a place they will want to return to. In this case, it’s achieved through a mix of superb cocktails, an expansive downtown view and swinging music.

But wait a minute. I thought other internet sites and musicians were sounding a death knell for swinging jazz. Can’t survive. Too old-timey. Only old farts go hear it, and pretty soon they’ll all be dead.

Yet, The Kill Devil Club is building buzz. People are checking it out. Rum and hot jazz are working.

Somebody didn’t get the memo.

I’ve already noted, through the Magic Jazz Fairy’s eyes, the year that has passed since Jardine’s demise (here). Kansas City’s jazz scene today may be no better than it was then, but it’s no worse off, either.

Yet, it is different. Each jazz spot, like The Kill Devil Club, builds its own identity and finds its own favorite groups which tend to return more often than others.

In Kansas City, you can no longer hear Ida McBeth every other Friday. There’s no more last Wednesday every month with Megan Birdsall, or a monthly late night with Shay Estes and Mark Lowrey. You can’t find Sons of Brazils twice most months anymore.

Take Five in Leawood continues booking a broad range of jazz. The Kill Devil Club seems to be finding the acts which work best for it. Musicians may find no fewer opportunities in Kansas City’s jazz scene today, but the opportunities are evolving.

Just as they have for 90 years.

I grew up in a Jewish household, without a particular appreciation for Christmas music. Out of more than 47 days worth of media in my iTunes library, only an hour and a half of it is Christmas songs (some Ella, some Diana Krall, Vince Guaraldi’s Charlie Brown Christmas and, of course, Bird’s White Christmas). 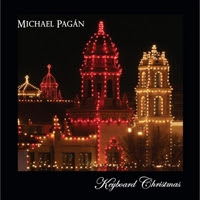 So when I received Michael Pagán’s Keyboard Christmas, I expected piano solos on songs I’ve heard and mostly ignored a thousand times in my life.

My expectations couldn’t have been more misplaced.

This is a CD of piano superiority, inventive riffs and engagingly fresh interpretations of a dozen songs which you just happen to run into during December more often than during other months of the year.

Take the opening number, God Rest Ye Merry Gentlemen, which boldly states the theme then creatively circles around it, delightfully weaving it in and out. Or the thoroughly swinging version of It Came Upon a Midnight Clear. Contrast that with the somber but no less irresistibley imagined Good King Wenceslas.

All total solo piano fun worth hearing, and during more than one month of the year.

Michael Pagaán’s Keyboard Christmas can be downloaded from iTunes here or purchased from CD Baby here.