It was during the 1987 Kansas City Jazz Festival. I was an organizer that year, and Mike, then living in Boston and having just released a new CD, headlined Saturday night. That’s when I first met Mike Metheny. Another trumpeter, Wynton Marsalis, headlined the festival’s other night that year. Mike’s was the trumpet set the crowds enjoyed most. Mike’s was more fun.

I don’t remember when I first Stan Kessler, but I knew his brother first. I took over as chairman of the Kansas City Jazz Commission later in 1987. The Commission was in disarray and Stan’s brother, a young attorney, spoke before City Council committees to advocate its defunding, then advised groups in conflict with the Commission. It took me awhile to see Stan as a trumpeter and not as that pesky young attorney’s brother. But when I did, I recognized an extraordinarily talented and hard working trumpet player. He could make a living playing jazz in Kansas City by headlining a variety of ensembles, never compromising the quality of the music.

I became aware of Hermon Mehari first through his award-winning group Diverse, but then through his showing up regularly to sit in with other musicians. It was Megan Birdsall’s gig one night at Jardine’s when Hermon joined the last set and I tweeted that this must be what it was like to hear Ella and Sweets together. Sitting in that dingy dinner club, I meant it. The music was that good. Since then, whether in a tribute to Michael Jackson or gigs with rappers, Hermon has spread his talent across genres while remaining one of the most original and engaging jazz trumpet soloists in Kansas City.

I first heard T.J. Martley when he subbed one night for Mark Lowrey in Shay Estes’s group. Young, with scraggley hair and beard, he sat in with scant rehearsal and owned the music that night. Since then, I’ve heard T.J. own the keyboards, through solos of thoughtful intricacy, with a variety of jazz ensembles and on his own solo CD, Meditations, Vol. 1. There’s nothing scraggley about this piano playing.

I’m not going to try to recall when I first heard Gerald Spaits on bass. Let’s just say he dates closer to the Mike and Stan generation than to Hermon’s and T.J.’s. Whether backing Marilyn Maye or Karrin Allyson, whether leading an ensemble with superb alto player Charles Perkins or joining any number of groups playing everything from jazz standards to the music of The People’s Liberation Big Band, Gerald is a master.

Brian Steever, I’m reasonably certain, I first heard at The Drum Room, in a trio with Hermon and Zach Beeson. Brian was young and performed with unmatched energy. This was the first time I’d heard Hermon in his own group with a drummer other than Ryan Lee. A couple years later, I received an email from Stan urging me to attend the premiere of a new group he’d assembled, Parallax, featuring two drummers, Brian and Ryan. This unique ensemble showcased Brain’s and Ryan’s new maturity, driving rhythms under a chorus while challenging each other through inventive solos. Heck, I used to disdain drum solos. Brian and Ryan changed that.

Now put these musicians together: Mike Metheny, Stan Kessler, Hermon Mehari, Gerald Spaits, T.J. Martley and Brian Steever. Three veterans, three young cats. Three trumpeters, three rhythm. Musicians who have anchored the Kansas City jazz scene for decades with musicians who not too many decades ago wore diapers. Put them together and write some arrangements for them, a mix of standards and blues and bop and bossa nova and originals.

Then call them, A Kansas City Trumpet Summit. 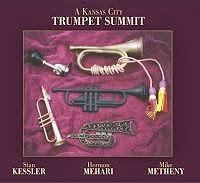 This new CD is a smart snapshot of some of the diverse talent elevating Kansas City jazz in 2013. Here are two generations of musicians complementing and driving each other with a grace that belies their mutual musical respect. This is music which avoids the jazz fringes, a CD of Kansas City masters playing easily engaging jazz.

In fact, there may be a bit too much perfection here. In live performances, I’ve heard the ensemble take Back at the Chicken Shack at a much more aggressive pace. I’ve heard Hermon weave a solo through Body and Soul with more adventure. Capturing a little more of Trumpet Summit’s live looseness would have been fun. Number 36, a duet between Mike and Stan backed by Brian’s drums, takes the biggest chance, and succeeds.