Imagine two highly respected writers simultaneously publish new, finely researched yet easily readable books offering fresh details and the most accurate histories yet on Kansas City’s famous jazz son, Charlie Parker. Imagine both books are honored by a broad swath of positive reviews and are quickly accepted as definitive Parker biographies. Now imagine that these authors are scheduled to appear together on a stage in Kansas City to discuss their books, their research, and Charlie Parker.

Nothing in that last paragraph is imaginary.

The books, of course, are Chuck Haddix’s Bird: The Life and Music of Charlie Parker and Stanley Crouch’s Kansas City Lightning: The Rise and Times of Charlie Parker. Haddix oversees UMKC’s Marr Sound Archives – one of Kansas City’s most under-recognized treasures – and stands alone as KC’s premiere jazz historian. Crouch is an internationally-recognized jazz author and critic.

They have agreed to share the stage at the Bruce R. Watkins Cultural Center on the evening of June 19th to talk about Charlie “Yardbird” Parker. This should be a fascinating discussion between two men who have established themselves as the contemporary “Yardbird” experts.

It’s being arranged by Anita Dixon, Vice President of the Mutual Musicians Foundation (MMF) as part of a June Kansas City Jazz Blogger Summit. This summit is organized by Dixon and MMF with Brand USA, which describes itself as “a public private partnership with the mission of promoting international travel to the US.”

Jazz bloggers from throughout the country, many invited from a list supplied by Crouch, will descend on Kansas City to be immersed in our jazz history and culture. For instance, the morning of June 19th, they will tour the areas where Kansas City jazz thrived, in order to walk away understanding why and how a unique voice in jazz grew here.

(Then, hopefully, they go write about it. Plastic Sax, next summer, we have colleagues.)

Some blogger events will be open to the public. Especially the joint talk by Chuck Haddix and Stanley Crouch. Any chance we might see some professional jealousy there? Don’t count on it. On the contrary, Dixon tells me both authors were excited about appearing together. Crouch’s reaction to seeing Haddix: “I have questions for him.”

The full schedule is here.

Tickets to Carrington are $20, and to Sandoval are $25. Or, they’re just $5 with any valid and current student ID. Tickets are available here for Carrington and here for Sandoval.

Festival organizer Doreen Maronde has been making Kansas City area jazz festivals a reality since the 1980s, when she worked for Kansas City Parks and Rec and I was a volunteer on the Kansas City Jazz Festival (which was staged in a Kansas City park with Parks and Rec as our invaluable partner). I salute a force – there are many in this city – who has long labored behind the scenes to see jazz in Kansas City thrive.

I came to jazz through swing. And while music doesn’t necessarily need to swing for me to appreciate it, there needs to be an accessible element to draw me in, whether it’s the whimsey of The People’s Liberation Big Band or an inviting musical hook or phrase. 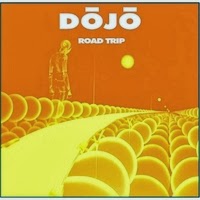 I don’t find that personal invitation often enough in jazz fusion, so that’s a style I generally avoid. As such, after reading Plastic Sax’s review of the new album by Dojo, Road Trip, I was a bit apprehensive before listening to the CD. He called it jazz fusion. He compared it to names who, except for Billy Cobham, I’ve never heard. He compared it to music jazz purists detest. I’m not a purist, but my sympathies lie more closely there than to fusion.

I needn’t have worried. Each of the original compositions filling Road Trip offers that musical invitation. Each draws me in with a musical phrase or hook, an invite to grab onto repeated like a riff, that even ol’ more-purist-than-fusionist me can enjoy. Most often, these lead to Brian Baggett’s guitar exploding in imaginative directions. I lack the musical vocabulary to know to whom Baggett’s style can be properly compared (this ain’t Charlie Christian), but listening closely carries you along intriguing and original, but rarely subtle, lines. Jeff Harshbarger’s and Chris Handley’s bass, and Luke Stone’s drums, provide the base along which Baggett travels.

Road Trip can be purchased on CD Baby, here, or downloaded from iTunes, here.