Now let’s hear from the clubs.

This is the second week of excerpting articles from the latest issue of Jam, on the streets now (it’s free) or downloadable from here. This issue celebrates the magazine’s thirtieth anniversary by asking, what is the future of jazz in Kansas City? Last week quizzed the mayor on 18th and Vine. This time, John Scott from Green Lady Lounge and Gerald Dunn from the Blue Room offer insights into their operations. 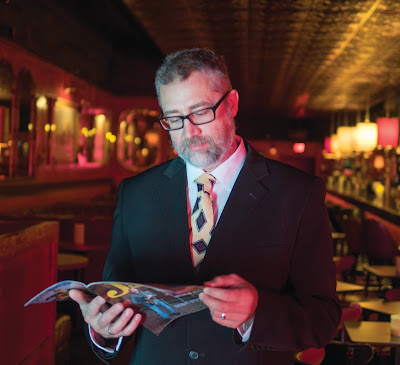 Stepping into the Green Lady Lounge feels like stepping back into the 1940s. Dim lighting, red walls, red drapes and faux-classic art lining the walls all build a classic ambiance. This must be what a jazz club in Kansas City used to feel like.

That’s all by design. It’s owner John Scott’s vision or, as he puts it, his point of view.

“It’s the club’s responsibility to get the patrons in,” Scott explains. “When I hear club owners say, we want that band to get butts in seats, I don’t think that’s a useful phrase, and I don’t ever want to hear anybody representing Green Lady Lounge to use that phrase. It’s beyond the ability, generally, of a band in the jazz genre to put butts in seats.

“There’s a lot of things marketing-wise that can make a jazz musician or a jazz band popular. If you go somewhere where they don’t get a lot of jazz, then maybe a jazz band can put butts in seats. But in Kansas City there’s jazz everywhere. It’s so rich. It’s like gold to the Mayans.

“So that can’t be the primary draw. You cannot expect amazing, world-class jazz musicians to draw people into a barn. The club has to have a certain aesthetic. It has to have a point of view.

“That point of view comes from me. The look, the paint, the color, the accessories, the dark lighting, all of those things to me are pleasing. For a lot of reasons I’ve incorporated them into the bar. Some of them are very pragmatic. The drop ceiling is both an aesthetic, useful thing, and it’s practical, relatively inexpensive. It connects the two sides of the building which were cut in half originally. This building has been around since 1889.”

That point of view equally encompasses the music.

“The first year was a sampler platter of a whole variety of kinds of music,” Scott says. “I was listening and trying to figure out the Kansas City sound. What is it in the past? What is it now? What is it going to be in the future? And what do I want to help give a home to?

“I learned to really dislike pick-up gigs, where people are just kind of filling time on stage. I wanted bands. I wanted people who play together on a regular basis to bring their best. I don’t want jam sessions. This is not the venue for that. This is a place where people come, experience the ambiance and there’s a band that plays together and is also producing original content.”

Often that content includes an organ. You will not find a piano on the club’s main floor, unless a musician has brought his own keyboard. Instead you’ll see a Hammond B-3 organ. A favorite ensemble in the room is OJT. They’re the classic organ trio with Ken Lovern on organ, Brian Baggett on guitar and Kevin Frazee on drums.

Scott describes OJT as “a kind of a north star, a point to guide everything else by. It’s a sound that I feel combines a dirt road kind of blues and a real jazz sophistication. OJT is a Kansas City sound to me that combines swing with a lot of sophistication.”

“To me, Electric Tinks is not experimenting,” Scott says. “It’s progressive. It is pushing the genre. You can see from where he’s pulling but he’s doing a lot of original stuff. His musicianship is fantastic. And talk about a point of view. They’ve got a great a future and I’m incorporating them into our rotation.”

Whether you agree with it or disagree, John Scott’s point of view is working. He pegs half his customers as coming from outside of Kansas City.

“Kansas City jazz is something that already exists out there, this brand,” he says. “We just realize the product and give it justice, give it support and help market it. People come to Kansas City and if they hear on Huffington Post or some Facebook feed, or however they heard about Kansas City jazz, and then they hear about Green Lady, associate it with Kansas City jazz, then they seek it out. That’s what’s happening.

“Green Lady is an evangelical jazz club because we’re not just preaching to the people who already know they love jazz, but rather I believe in getting people exposed to jazz and I believe they will like it.

That point of view extends to Scott’s vision for growing Kansas City jazz.

“If there isn’t a jazz scene, then you take a shotgun approach. But when a scene is vital and rich, clubs can more narrowly define, deeply and richly, what your take on the Kansas City sound is. Evidence of a rich scene would be that each club books a more focused part of the overall scene.

“Other private people need to come along and join the scene in earnest. If they don’t think it’s commercially viable, they’re wrong. If they want some help, I can help them. That doesn’t mean making it just like the Green Lady but it does mean having an aesthetic that is unique to you and consistent in your point of view and care.

“We have excellent, amazing musicians in Kansas City who, given the right environment, will really spread the love of Kansas City jazz.” 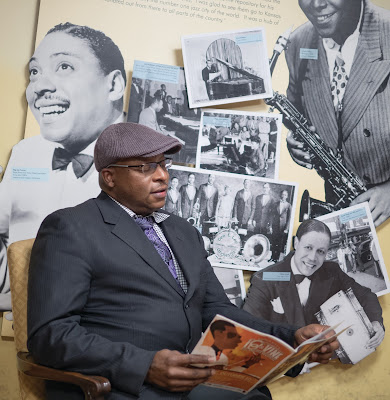 Gerald Dunn has worked at the American Jazz Museum since the day it opened. But he originally turned them down.

“I was living in New York at the time and had just come off touring the south of France for the whole month of June with Illinois Jacquet’s big band,” Dunn recalled. “I started working in Harlem, subbing for different bands, subbing at the Cotton Club. I felt at the time that if I left I would lose those connections.”

The museum asked again. He talked the offer over with his parents.

“My dad said, ‘Let me help you out. You have no more times to call to borrow money.’”

Today at the museum Dunn is Director of Entertainment and Blue Room General Manager.

The Blue Room, Dunn said, “started out only booking local musicians. We wanted to build a strong relationship with the community.”

“The older guys set a level of consistency. When you saw the Scamps perform on the stage, they brought an experience to you. The tunes that they sang, you could feel the song, you could feel the lyrics because they lived the lyrics. Those songs excited them. When they were playing from the stage, you were seeing that excitement. When it’s coming out of their horns, it’s exciting, it’s happening.

“Sometimes Eddie [Saunders] would be one of the grumpiest guys on earth, but once he put the horn in his mouth it became happy songs.

“I tell some of these stories to the young guys so that they can see there are legacies that they are a part of.”

“Make sure you have enough variety in your repertoire to be able to entertain the crowd. You can play original music, and that’s cool. But as people are coming in to understand you as an artist it’s good to be able to accommodate them and give them something that they might be able to grasp.

“It’s not always playing the best solo. A lot of times it’s being able to release the audience. Give them a break. Lay something in their lap. Get into their soul. Make them feel like clapping is what they want to be doing.”

Dunn has worked to understand who comes to the Blue Room.

“It’s people who want to have a Kansas City experience. They read about it and they want to experience it. We’re conscious of trying to bring in diverse crowds and bringing in the most diversity when it comes to artists.

Moving forward, does the Blue Room need to evolve?

And when a young musician with a non-jazz background approaches Dunn, “I don’t have to say, you can’t play here because you don’t play jazz. Come in, check out what goes on, and see how you can contribute to what’s going on. Let’s see how you can fit in. Let’s find ways to include you.