The educators surprised me.

They’re engaged in far more than developing the next KC jazz superstar. They’re introducing children to the music. They’re developing audiences. They’re bringing the best of the best to this city. They’re perpetuating our jazz culture.

This is the third week of articles culled from the latest Jam. It’s available available – free! – all over town or can be downloaded as a PDF here. The issue celebrates the thirty years of publication by asking, what is the future of jazz in Kansas City? This week, the articles that quiz a pair of KC’s key education leaders. 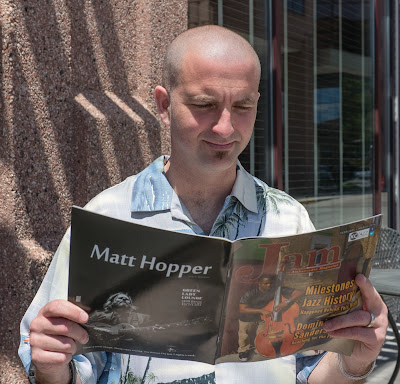 The best musicians are recruited.

“And one of the blessings that we get to sell,” says Dan Thomas, “is a vibrant jazz scene that is inclusive, that celebrates one another.”

“I do a lot of national recruiting,” Thomas explains. “I go out on the road and I’m performing with universities at their high school jazz festivals. If I perform at a club on the road, I hook up at a clinic somewhere to get in contact with the people who may not know UMKC’s name. There are a lot of institutions that have name recognition. We’re getting that now.

“Students are looking for contact. If I sweep through, I identify a few good kids. If I’ve given a good clinic, if I’ve played well, we’re connected now because jazz is a family. Then I can sell, for example, our bass instructor played with Thad Jones. I might invite him to come study at our jazz camp in the summer where you get a week-long workshop with our faculty, and they’re hooked. It takes sweeping moves where you make personal contact with folks.

“I spend 10 to 15 hours a week on the telephone and that’s all year long. Some of the studs that have made it onto our scene I’ve known since middle school.”

The number of jazz students coming into UMKC each year varies because, Thomas says, “we do enrollment management. If we have two trumpet players leaving, we’re only going to take two trumpet players. This year we’ve got 12 or 13 guys coming in. They’re all specific to what the program needs. They’re coming from all over the country. They’re amazing players.

“We carry 50-ish jazz majors, including undergrad and grad. Then we have several students who are jazz aficionados who participate in the program and need to participate in the program because we believe in the value of music education students. They need to have contact with us. If we don’t provide them with the opportunity, we’re just feeding the performance art. We need great music educators, too.”

The talent UMKC is bringing into Kansas City is some of the best. “The students that are looking at our school are bonafide jazz guys,” Thomas says. “They’re either going to be known relatively quickly amongst our scene or when they leave they’re going to be stars on their home turf.

“The depth of the program is significant. Every kid is amazing. They’re really talented kids who ten years ago would have been the star of the program. Now you’re looking at fifty or sixty of them.”

Convincing that talent to come to Kansas City can be hard. But, Thomas says, “once they get here, they realize how special it is.

After graduation, “the vast majority of students stay here. That’s a testament to our scene. There’s some doomsday folks who communicate about the lack of what’s going on in our scene. But Kansas City is a pretty phenomenal place that can absorb them.

“What’s unique about what we’re doing is that we’re trying to build unique artists. Because everybody is unique there is an opportunity for each one of them to generate revenue.”

Anyone who knows Kansas City’s jazz scene today recognizes that it is brimming with extraordinary young talent. But, Thomas notes, “Young folks have romantic ideas. They’re trying to prove something. That keeps old people young. You’ve got college age kids with seasoned veterans and there’s a healthy collaboration. Kansas City is not cutthroat and competitive. These students are so welcomed into the scene and they still have reverence for the old guard and what they can teach.” 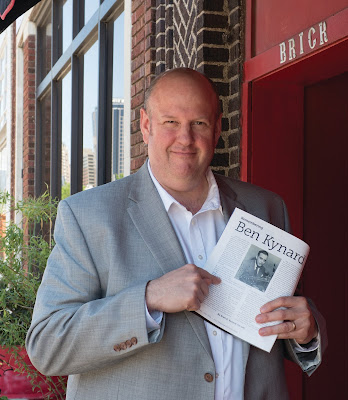 “We tour a 6-piece group,” McKemy begins, “sometimes adding a vocalist to that, to go to schools and do either general assemblies performances or specific hands-on music clinics with bands. We’ve been to Raytown South, Fort Osage, Hickman Mills, the Blue Valley districts.

“We’ve played in some gyms and some school auditoriums. On the top end, size-wise, a little over 400 kids at once.

“But we’ll also go in and work with just the music students and work on the songs that they’re working on in jazz band. We’ll also give them instrument clinics and improvisational clinics while we’re there. We’re able to go hands-on. The teacher in that situation is having their message reinforced. The kids are right there with Hermon Mehari and Rich Wheeler and Ryan Lee and all of the great players on the scene.

“The kids are enthusiastic and fired up about jazz, generally with lots of questions and a high level of engagement.”

McKemy is the Director of Education and Public Programs at the American Jazz Museum (and an incredible bassist).

On September 10th, he launches a new program for students age 3 to 18 at the jazz museum. It’s Jazz Academy.

“There are three main components,” McKemy explains. “In the mornings we’re going to have general music classes for ages three through sixth grade. Those classes will be a mixture of movement, music and other activities. The system is designed to engage kids at play rather than sit them in rows and teach them. It’s designed to get them having fun with musical instrument-type toys, and eventually building not only their musical skill but the way that they engage something that’s fun and playful.

“It also teaches as a key element reliance on their own ear. They learn to hear and to trust what they hear.

Improvisation is incorporated from the start. “The thing we want to accomplish,” McKemy says, “is that improvisation isn’t something they learn after they become an advanced musician. It’s just something that you do with whatever you can play. If you can hit two drumsticks together, you can improvise.

From 1:00 to 3:00, McKemy continues, “we’ll have combos, big bands and improv classes. Rotating in with the improv classes, we’ll infuse history about the music, about Kansas City’s role in it and about its cultural significance.

“We’re hoping to build the audience as much as we’re building bright young folks to play music.”

The third component, McKemy says, will be “an education-themed jam session in the Blue Room from 3:00 to 5:00 with the kids from the academy and whoever else wants to drop in for it. We’ll have as mentors the Elder Statesmen of Kansas City Jazz and other players to offer encouragement and show the kids the way.”

Three sessions a year are planned to coincide with fall, spring and summer school terms.

For the students, the program is free.

“It’s free but we also want to instill a sense of ownership of the program and pride in the Kansas City community,” McKemy adds. “We’re going to ask the students to pay it forward by participating in community outreach performances. We’ll go to assisted living facilities or community events and perform. We want to be able to teach some life skills to the kids and show them the value they’ll get from performing community service.

McKemy brings an even larger goal. “In Kansas City, in terms of talented musicians, we have an embarrassment of riches,” he says. “But historically, we have done just a so-so job at connecting the actual living resources of jazz with the kids. We can’t afford to let the resources go to waste. We need to have Brian Baggett and Ryan Lee and Clint Ashlock and Charles Perkins and Gerald Spaits sharing what they know. It has to be across generational lines and racial lines and economic lines.

“I think it’s correct for our city to have the best jazz education that exists. We should be on a par with New York, Chicago and New Orleans at a bare minimum.”