In assembling the latest Jam – celebrating 30 years of the magazine with the question, what is the future of jazz in Kansas City – capturing the views of musicians was critical. I chose to include one who has been part of the KC scene for over a quarter century and one who is relatively new.

The June/July Jam can be picked up (free!) all over town or can be downloaded as a PDF here. Or you can read the interview with Mayor James, the views of club managers, and the views of educators in the last few posts. Next week, excerpts will conclude with the article quoting the executive director of the American Jazz Museum. This week, here's the issue’s articles with the views of Hermon Mehari and Angela Hagenbach. 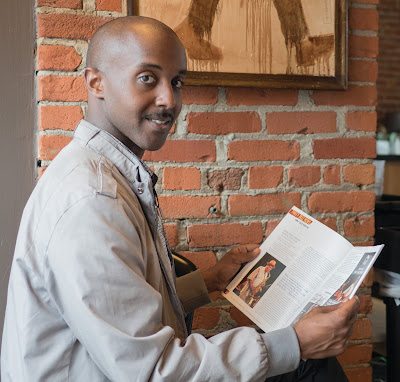 On August 28, 2009, the line to get into the Blue Room ran out the door and threatened to circle the block. Inside, Diverse was releasing their CD. The group, comprised mostly of UMKC jazz studies students, had won the Gene Harris Jazz Competition in June, 2008.

That night was when many in Kansas City recognized something special was happening in the jazz scene here. Some already knew. But others now understood that these young musicians brought special talent.

“It was a catalyst for original music in jazz. We were all pretty much working at that time individually. I feel like everyone from the get-go, all the players at UMKC, were immediately on the scene. Especially by 2009 I was being hired.

“During the competition I remember there was a lot of buzz about Diverse. Anything that gives Kansas City notoriety and the national spotlight, people around here get excited about.

Today, Mehari stands as a prime example of a young musician building a career in jazz in Kansas City in the 21st century.

“There’s a lot of potential to work here,” says Mehari, who moved to Kansas City to attend UMKC in 2006. “I’ve only seen ten years of it, but I feel like the scene here has always worked out in some way or another. It has its ups and downs but I think it’s on an upward trajectory in general, especially recently. If more players came here, it would be in concert with what I think is a growing younger audience. And I’m sure there’s going to be more venues opening up, and other places that maybe don’t have jazz yet will start having jazz.

“There’s enough work here. With the closing of Broadway Jazz Club and Take Five, the only thing that’s become more difficult is when I hear from people from out of town who want to come to Kansas City and play. That’s limited. One thing that has been a little more difficult is to accommodate touring musicians.”

Mehari has played a key role in enticing other outstanding jazz talent to move here and make Kansas City their base. He explains, “I kind of ushered in guys like Peter Schlamb, Karl McComas-Reichl and John Kizilarmut, who are incredible players who are not only part of the scene, they’re helping to push the scene. It means a lot that players like that would live here. It’s a testament to our scene. They love it. Those are guys who are also doing stuff outside of Kansas City on a regular basis. And all of that stuff is cool because it reflects on Kansas City.

“Peter and I have taken an initiative to start trying to bring people through here. I would never say that at the beginning the purpose is, hey, do you want to move here? It’s, let’s play. Then the love comes. I’ve brought Tony Trixier, who’s in Diverse now, maybe four times in the past four or five years. Recently Ben Van Gelder has come through a couple times. Travis Reuter, the guitar player, has partially moved here. Those guys talk about this place and all of a sudden young musicians in other cities are talking about Kansas City.”

But is Kansas City an environment that demands a musician plays more traditional jazz?

“It does in gigs like the Majestic,” Mehari says. “You’re mostly playing standards and swing. But with the Electric Tinks I play with Peter, we play First Fridays at the Green Lady, and it’s great. All original music and all electric music and it’s all top-notch players. I have liberty when I go to the Blue Room, I can do creatively what I want. And if I want to do the crossover stuff, I’m always open to play at clubs like the Record Bar or the Riot Room.

“It’s a balance. You can’t gig exclusively on the local scene playing just creative music. You can’t make a living. It’s impossible. If my income was solely based on playing Electric Tinks, and Peter was trying to book it as much as possible, it wouldn’t happen. But that’s the great thing about jazz musicians, we are very versatile. It’s important that we know the tradition anyway. We all love the traditions. We play all of the old stuff and we put our spin on the old stuff, too. It’s not just rehashing it in museum-type ways. It’s bringing life to it. And we have the original, creative stuff, too.”

Mehari and his peers find Kansas City to be a good base.

“We talk about this a lot with my peers and we feel strongly about this. We feel like it’s a great scene and it’s a growing scene. It’s an affordable city. It’s a city with a lot of culture and unique things. And it’s a great community which makes it very appealing to musicians.” 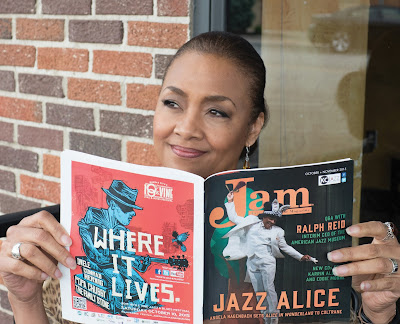 “My first steady gig was at the Ritz Carlton,” she remembers. “It was up in the ballroom. I played with Russ Long and Milt Abel [later, Gerald Spaits] and Ray DeMarchi. That was four nights a week for about four years. That’s where I honed my craft. It was wonderful because it was very glamorous and I was still modeling at the time. I got to wear gowns four nights a week, which was a model’s dream.”

At the time, Hagenbach says, “There were lots of festivals and lots of places to play. Someone like me could work seven nights a week if I wanted to, and several gigs a day. Through my work at The Ritz I got tons and tons of country club and private events which were very lucrative, and a lot times they were off nights. It really was great to bolster my income and broaden my fan base.”

But a singer today may find the opportunities more sparse.

“If they solely want to perform,” Hagenbach muses, “that could be a challenge. There doesn’t appear to be a lot of venues for vocals. It used to be vocal-heavy. But now it seems to be more instrumentally-heavy.

“One has to be creative if there’s not enough clubs available by thinking outside the box. Find a void and fill it. We need to have music here and I’m your girl. For example, I once started the luncheon at the Majestic because I wanted to do an earlier show on Wednesdays. I needed to work while my children were at school. I did that at a couple of places.”

And 25 years later, the pay has changed.

“It’s gotten worse,” Hagenbach maintains. “It’s homogenized. This is what everybody gets. If you want to take a leader fee, then everyone else is going to get less. I have a problem with that. It used to be, you would set your rate based on your ability to bring in a fan base and then you pay your guys a decent wage and you take a leader fee. There’s so much that a leader does in addition to perform. You get the gigs, promote the gigs, do the 1099, do the payroll. To me, that’s worth something. In a lot places, I had to even provide the sound system. That shouldn’t be free.”

Hagenbach is concerned about opportunities for veteran musicians.

“This is a city that has an abundance of talent. It’s startling how much there is. There’s people moving to town and these young people that are coming out of Bobby [Watson]’s program are very high quality players. It’s great that they’re going out and keeping the music alive.

“But on the same hand, the older musicians and the people in the middle have to remain viable. They have to keep the jazz community vibrant. There’s not as many opportunities for the older ones because it seems as though there’s a large group who will play for less money just to play, which drives down our ability to earn a living.”

But beside the challenges, Hagenbach also sees opportunities.

“It’s like any movement, the struggle continues. You’ve got it keep it viable and keep it vibrant and relatable. It’s not going to be easy because there’s all this new music coming out. But there’s a renaissance coming. The young people are helping to bring it. I want to branch out to the people who don’t even have jazz on their radar. This is something that we as a city can use as a selling tool. When you arrive at the airport, you should have no doubt that you’re going to get some seriously good jazz here.”