Just the second of January, and KC hosted what will be remembered as one of the great jazz performances of the year, Bobby Watson and Horizon at The Blue Room. Fellow blogger Plastic Sax reviewed it here. KC Star editor Steve Paul reviewed it here. Even the Star’s and KCUR’s Steve Kraske tweeted, “Saw Bobby Watson Saturday night. If you weren't there you already missed the best jazz show of 2010.”

Now, I know better than to think I can compete with the pro’s prose. But I was there, too and, with a blog on jazz and Kansas City, of course I need to add my take on the evening. I call this, ’Twas the Night After New Year (I apologize in advance for some really bad rhymes. And, as always, clicking on a photo should open a larger version of it.)

’Twas the night after New Year, two thousand and ten.
Snow started to fall as I watched from the den.
The show at The Blue Room would be good this night
But outside the cold and the snow were a fright. 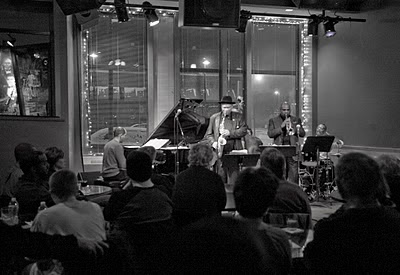 Yet, to see Bobby Watson and his group Horizon,
For them it was worth from the sofa a’risin’.
Besides, who would get out on this kind of night?
I could stroll in and enjoy a front row delight. 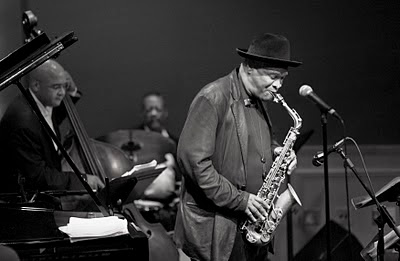 I’ve seen Bobby often; he lives in KC.
But this famous group I’d heard just on CD.
In jazz they’re renowned, known as one of the best.
So weather be damned, as I drove to my quest. 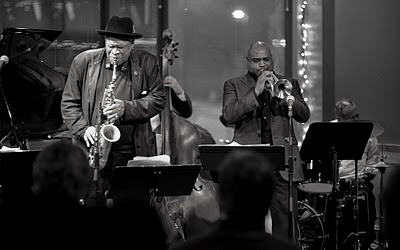 I parked in a lot right at 18th and Vine
Then walked ‘cross the street. I’d arrived just in time.
And what to my wondering eyes should appear
But a room that was packed with fans, good drinks and cheer.
I walked up the ramp, far away from the door.
It was clear I would not find a seat on the floor. 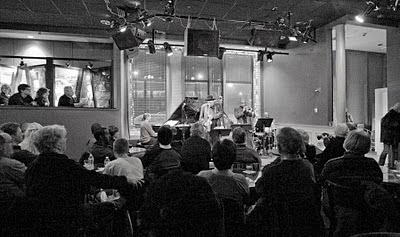 The crowd spanned all ages: young, mid-age and old.
They came for great music, and out of the cold.
People came from the ‘burbs, from the city, all quarters
(One table was filled with ace Star reporters).
There was even a couple with pre-teens and treats
(I was jealous ‘cause those kids had much better seats). 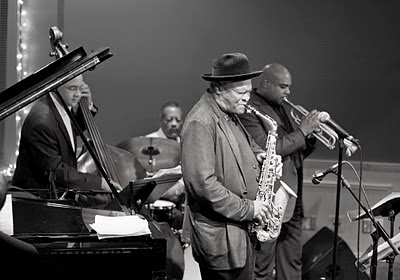 The band took the stage. We sat rapt at attention.
Expectations were high, there’s no need to mention.
Bobby blew first, fingers nimble, then fast.
Horizon came in. We were there ’til the last. 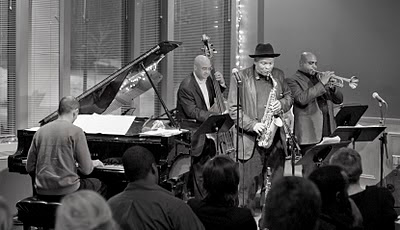 With Edward on keyboards, Peter on bass,
With Victor on drums, the best anyplace,
With Terell on trumpet and Bobby on sax,
Most numbers blew hard, though some would relax. 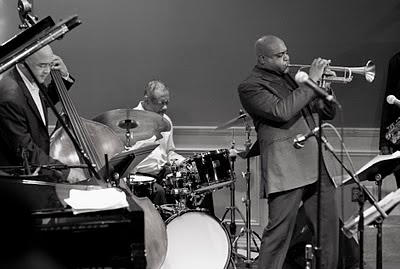 They played one by Duke, one by Burt Bacharach.
They played one that’s hard bop, then subtle, then back.
But most were by Watson, and most he would drive.
The music exploded. The room was alive. 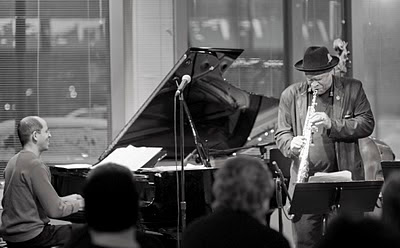 One beautiful number, just Bobby and Edward,
Still rolls through my head, may be there forever.
And when the show ended, we stood and applauded,
What better way for a year to get started. 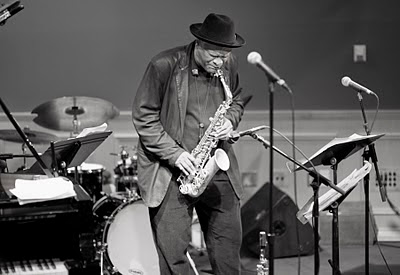 No matter that snow from my car I’d now scrape,
’Twas worth it to sit there, my mouth wide agape.
And the staff did exclaim as we strode out of sight,
“Happy New Year to all, and to all a good night!”
Posted by kcjazzlark
Email ThisBlogThis!Share to TwitterShare to FacebookShare to Pinterest
Labels: Blue Room, Bobby Watson, Horizon, jazz, kansas city