Never mind, for the moment, the promotional image with circles outlining a 1970s-style afro. Does that really appeal to the age group which attends outdoor music festivals? 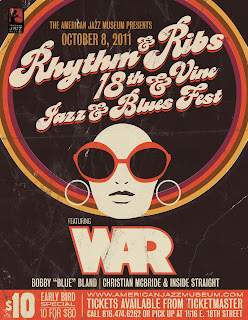 And never mind the headlining group War, which only has a songbook in common with its 1970s funk namesake. As someone who helped organize jazz festivals for seven years, I recognize the importance of a well known name to draw attention and an audience, even if the connection between their music and the festival’s intent is, perhaps, precarious.

Instead, look at the schedule, here, of the 2011 Rhythm and Ribs Jazz and Blues Festival, taking place on October 8th from 11 a.m. to 11 p.m. by the American Jazz Museum. With other headliners like Christian McBride and Bobby “Blue” Bland, and with other scheduled performers like Charlie Hunter, Rob Scheps and the Wild Women of KC, this event is musically solid.

This is the second year for a scaled-back, viable-in-a-recession Rhythm and Ribs festival. I applauded the return of the event, in whatever form, last year. I hoped last year established a base from which subsequent festivals would solidly grow.

I realize we're still mired in an economic downturn. I realize that corporations are tighter with donations and civic support today than they were during the Rhythm and Ribs glory years. I know first hand how critical corporate support is to a financially successful festival. And I applaud the American Jazz Museum for staging a financially responsible event, because I also know first hand how easy it is to let ambitions overtake fiscal reality. I know all this.

Yet, it's hard to set aside a twinge of disappointment that this year's festival doesn't appear to have artistically grown.

I missed last year’s fest (a nephew was married that day). So until I experience this year's event, I will refrain from expressing further twinges, and from further comparisons to the grand event this festival was before succumbing to an economic hiatus.

Rather, I’m excited that, for the second consecutive year, the Rhythm and Ribs Jazz and Blues Festival is back. Tickets are just $10 until September 15th (prices increase after that) at the American Jazz Museum. I have mine. I’m looking forward to enjoying a day of solid music.

Despite the dated afro and War.

But before the second year of a resurrected Rhythm and Ribs Jazz and Blues Festival, comes the second year of the Prairie Village Jazz Festival, this Saturday. Last year the volunteer team staged a wonderful inaugural event, a day of free music, which I photographed here. 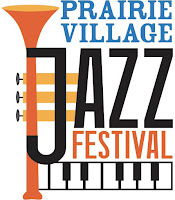 Full disclosure: The festival recruited me to assist with this year’s event (though I’ve done little more than shoot my mouth off at a few meetings). So I don’t come to this unbiased. I want you to attend to this festival. It’s free, so you have no excuse not to. None.

Besides, take a look at the lineup (here). Nobody should miss a day of jazz starring Bobby Watson, Deborah Brown, Mike Metheny, The People’s Liberation Big Band, and Shay Estes with a reunited Trio ALL. Every one of them except Mike has been featured in photo spreads in this blog. And Metheney’s CDs have been reviewed here twice.

All for good reason. Each one is among Kansas City’s jazz best.

The only clunker of the day looks to be a staging of a weekly radio variety show, 12th Street Jump. A variety show in the middle of a music festival wrecks the day’s flow and is idiocy. Meanwhile, some of last year’s founders left the event while whining to the press that they didn’t get their way, embarrassing only themselves.

But, if you've read about the family squabbles, set them aside. As long as the weather cooperates, the second Prairie Village Jazz Festival promises to be a day mostly filled with spectacular music. Admission is free. It’s this Saturday, September 10th, from 2  to 10 p.m., in Harmon Park at 77th and Mission Road, next to Shawnee Mission East High School.

My job that day? I’ve volunteered to take photos. You'll see them in this blog first.

This Friday, on Steve Kraske’s Up to Date on KCUR-FM (89.3) at 11 a.m., Bobby Watson, Deborah Brown and Brad Cox (leader of The People's Liberation Big Band) are scheduled to discuss the state of jazz, both locally and internationally. Each participant brings a unique background and view. This promises to be a fascinating roundtable.

Then, of course, hear each of them perform the next day at the Prairie Village Jazz Festival.

And the week after Prairie Village is a downtown mystery jazz festival. The Power and Light District’s schedule boasts the 14th Street Jazz Festival for 2 to 9 p.m. (that’s what it says at the top of the page) on Sunday, September 18th. Or maybe it’s 11 a.m. to 9 p.m. The only knowns on this one are in a blurb on their web site (here):

It’s two weeks before your festival, Power and Light guys. Now is not too soon.