At an outdoor festival, you can control everything except the weather.

I was president of the 1989 Kansas City Jazz Festival. It was my sixth year as a volunteer organizer. I’d been Vice President of the event, and Secretary and Treasurer. I’d headed up fundraising and chaired the talent committee. I’d appeared on TV and radio to promote previous years. But this was the first time my name was actually attached to the event.

And we booked Pat Metheny as the headliner. This was someone we wanted every year since I was first involved, but we either couldn’t afford him or we couldn’t meet his group's power needs, or schedules didn’t align. But he wanted to play Kansas City, so his agent negotiated a fee we could afford, substantially less than any other stop on that tour, and he could be here on Sunday. We rented extra generators to accommodate the show.

Sunday night, crowds streamed into Volker Park, where the stage stood at the south end. What was then Brush Creek Boulevard, between the park and the Nelson Museum’s south lawn, gridlocked bumper-to-bumper with cars. We were going to fill the park and probably the Nelson’s lawn, too.

Friday night, as we set up, Bryan Busby of KMBC broadcast the weather for the 6:00 news from the park. He predicted rain for Sunday night. When he was done, I told him, respectfully, I hoped he was wrong. For our sake, he hoped so, too.

As the local acts preceding Pat ended, and as the crew prepared the stage for the Pat Metheny Group, dark clouds claimed the venue. Winds escalated. A few rain drops fell. Then a storm lashed the park, violently. We shut everything down.

We’d spent a year planning the event. We had no paid staff (though Kansas City Parks and Rec provided invaluable help). As president of the event, the hours devoted to planning and preparation felt like holding a second and third full time job. To expend that time and effort then be denied such a highly anticipated conclusion, left me feeling numb. I wasn’t sad. It didn’t actually hurt. Because, while there’s always situations which will be handled better next time, we had planned as well as we could. We were staging a damn good festival. We had no reason to to feel sorry, no reason to regret. We had done a good job.

I just felt numb. Recalling that day, I still do.

About 3:45 p.m., a storm suddenly engulfed the park. Musicians and volunteers and crew tried to rescue the equipment on stage. The stage was lowered and a tarp secured. But straight-line winds popped bungee cords holding the tarp, the tarp blew open, equipment tumbled across the stage, savaged by rain and hail. The few vehicles driving down Mission Road looked like they were parting the Red Sea. One person tells me she saw the winds lift one person off the stage.

In the end, nobody was hurt. Equipment was damaged and some of it ruined. The rest of this year’s festival was cancelled.

I helped little with the Prairie Village Jazz Festival. I didn’t have the time or emotional investment that other organizers brought into Saturday. I didn't endure the arguments or setbacks or successes, which are inevitably part of organizing such an event, that many others did. I’m sad to see the festival end with a torrent. But I don’t feel what others who devoted so much more to the event feel.

I do have some idea, though, about what they feel. Because those of us who have planned a jazz festival in Kansas City only to see its climax denied by a rainstorm, comprise a rather small club.

We know you can control everything at an outdoor festival except the weather.

My job at the Prairie Village Jazz Festival was to take photos. Along with the rest of the event, that task was cut short. But the audience in Harmon Park was anything but short-changed by the two acts which did take the stage: An amazingly good Shawnee Mission East Jazz Band (which I propose should open each year’s Prairie Village Jazz Festival) and Shay Estes and Trio ALL, which for an hour on Saturday owned Prairie Village, Kansas. I’ve since directed a dozen people to Shay’s website to find out where else they can hear her sing.

I’d hoped to fill a few weeks of blog posts with festival photos. Not this year. But here’s a shot of each of the acts, to show you what you may have missed before the Prairie Village Monsoon of 2011 hit. 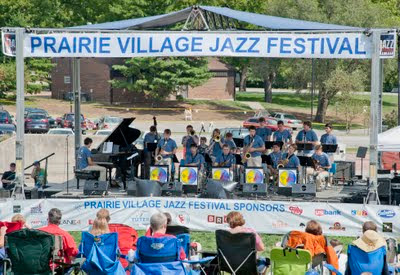 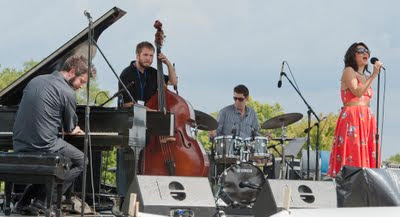 Shay Estes and Trio ALL