Towards the end of Dysfunctional, in Chapter 30, Alaadeen observes:

“I’m constantly saying that the kids now are developing so fast. Kansas City jazz is starting to grow. I think the young kids around here are starting to get it. I noticed a bunch of the kids are wanting to play straight ahead rather than the fusion. It’s time for Kansas City to wake up and take your place in the world…. We have an outflow of young talent that’s coming out of Kansas City now. Kansas City…get ready for the explosion.”

It was a similar observation that inspired the start of this blog.

Kansas City jazz saxophonist Ahmad Alaadeen, born Sonny White in 1934, performed with Miles Davis, Billie Holiday and Jay McShann. He toured with Sam Cooke. He hung out with Dexter Gordon at 12th and the Paseo. He grew up hearing McShann’s big band with Charlie Parker practice just down the street. He worked with and taught some of today’s KC greats, like Harold O’Neal, Kevin Mahogany and Charles Perkins.

Alaadeen absorbed then left his stamp on Kansas City’s jazz scene. He recounts his stories in Dysfunctional: Life Journeys of a Second Generation Jazz Musician. After being diagnosed with stage four bladder cancer, Alaadeen spoke his memories into a recorder, which have been edited by his wife Fanny Dunfee into a vivid illustration of Kansas City’s jazz scene in the years after Basie left, through the 1950s and on into today.

The insights Alaadeen offers into KC’s second generation of jazz are invaluable. “I learned a lot of good from Jay [McShann],” he writes, “but also a lot of bad habits. He taught me much of the lifestyle back in the day; he taught me the street life.” Yet, too often passages tease without providing details. “In the early ’60s, I moved to New York and performed there. I was kind of a character back then, not too stable.” Kind of a character how? Unstable in what way? What did he do to warrant such a self-characterization? What stories are not being told?

Regardless, the thoughts Aladeen does convey build our understanding of jazz today. “My college was on the streets,” Alaadeen says, “and I was learning improvisation on the bandstand.” When comparing his education to now, Alaadeen relates, “Now it’s in learning institutes all over the country…. The music is taking a more intellectual turn when every institution of higher learning has a jazz program…. Jazz is not the same now…the technical level is better but not the creativity…. They go to school to get their technique, and then they learn to play this music. The musicians now are not playing from instincts, I think, as much as they’re playing from what is taught. Conservatory jazz or institution jazz is moving further from the tradition and cultural foundation from which the music was founded on…cultural experiences that were handed down through the oral tradition.”

That argument begs the question of where a student today finds the cultural experiences handed down orally that Alaadeen lived (except, perhaps, at the Mutual Musicians Foundation). But it helps explain why Kansas City jazz in unlikely to see another musician like Ahmad Alaadeen.


Dysfunctional: Life Journeys of a Second Generation Jazz Musician. can be purchased from Alaadeen's website, here.

There was a second introduction at the press conference last month, at the Mutual Musicians Foundation, announcing Kansas City wine (covered here). Also announced was the latest edition of Sonny Gibson’s book, Kansas City: Mecca of the New Negro. 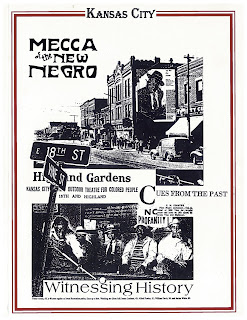 This is a 376 page collection of newspaper and magazine clippings – news stories, obituaries, photographs, advertisements – from African American newspapers and magazines, dating from 1900 through the 1970s.

A study is being done today to renovate the Boone Theater at 18th and Highland. Want to know what the theater’s namesake, J.W. “Blind” Boone looked like? Find out in a 1914 news story, or in an ad when he played the Allen Chapel in Columbia, Missouri.

There’s ads for the Roberts Company Motor Mart, “The Only Negro Automobile Sales Room in America.” The building still stands at 19th and Vine.

I’ve written about The Second Most Historic Jazz Structure in KC, the Eblon Theater (here). Here’s a photo of it being built. And a news story on its opening (“A modern, reinforced concrete and steel structure costing $60,000 will be thrown open to the public when the Eblon Theater opens its doors to patrons….”). There’s a photo of owner Homer “Jap” Eblon and, on a later page, his obituary.

From an ad: “Bennie Moten Musical Crown in Danger. Jesse Stone Defies Bennie For Orchestra Contest. $500 Side Bet. Bennie Posts $250.00 - Stone’s Money is Up. Bennie Accepts the Challenge. Thurs. Night Feb. 3. 15th and Paseo, Recreation Hall. Who Will Win? Come Out and See!”

On another page, a photo of two men in white coats and bow ties. The caption begins, “Pete Johnson and Joe Turner, who are featured entertainers nightly at the Lone Star Gardens on Twelfth Street….”

But the book is as frustrating as it is valuable. Organization is rudimentary. There’s no contents and no index, and no good way to find anything other than flipping through the pages. Many pieces bear no dates (for instance, there’s no indication of when the ad with “Blind” Boone in Columbia ran). And none of the sources are cited. For historical research, the lack of identifying records limits the book’s usefulness. Also, many of the photos, articles and ads appear to be photocopies of photocopies.